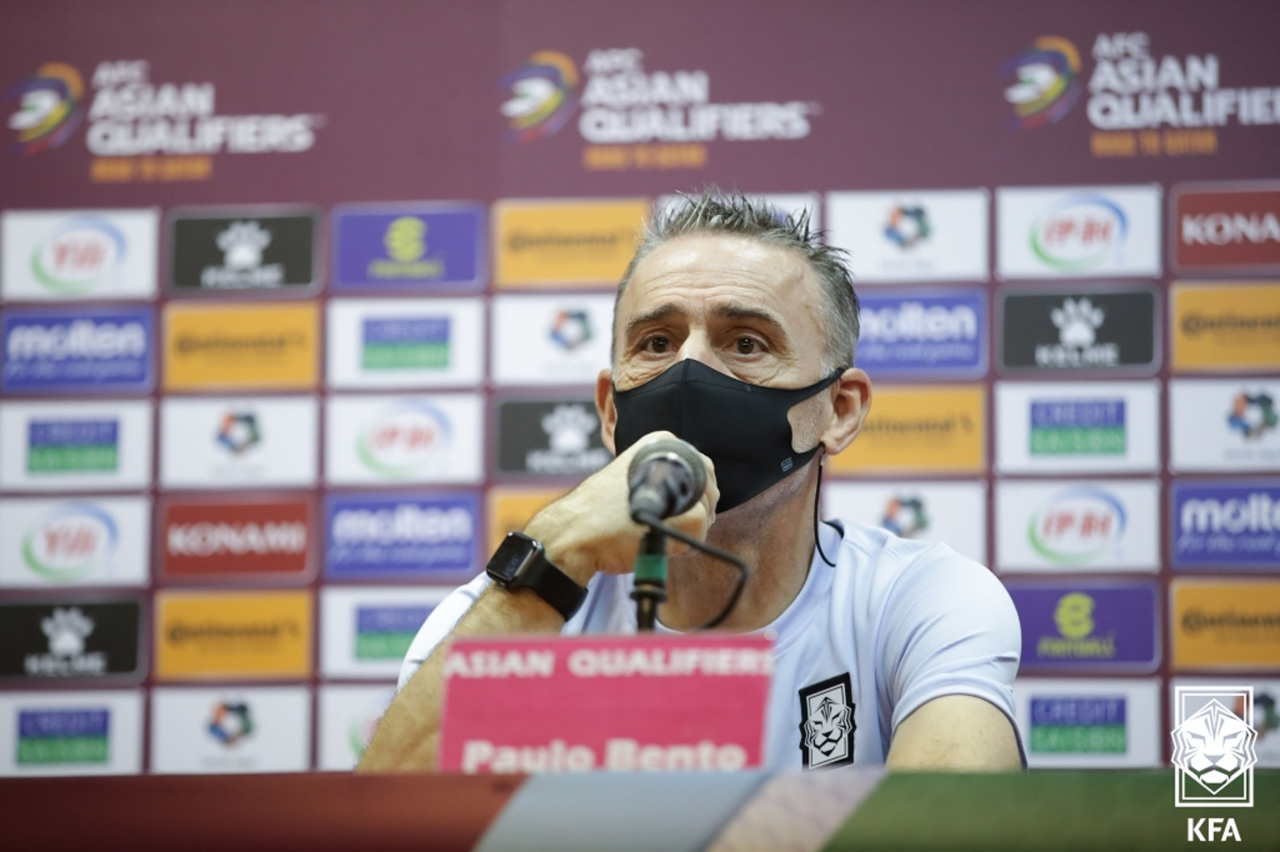 South Korea head coach Paulo Bento speaks at a press conference at Azadi Stadium in Tehran on Monday, a day before a World Cup qualifying match against Iran, in this photo provided by the Korea Football Association. (Yonhap)
South Korea will face their biggest challenge yet in the final Asian qualifying round for the 2022 FIFA World Cup on Tuesday, when they visit Iran in their first away match of the ongoing phase.

With Iran being the highest-ranked Asian team at No. 22, 14 spots above South Korea, this may call for some adjustments for the Taeguk Warriors.

“What we know is that it will be a different game with a different, strong opponent,” Bento said in his prematch press conference from Tehran on Monday. The kickoff between the two sides is 5 p.m. Tuesday at Azadi Stadium in Tehran, or 10:30 p.m. Tuesday in Korean time. “But our style and our way, we‘re going to keep with that. Our idea is to play as well as we can, respect our opponent, but of course, try to play with our style, even if we know that it’ll be a different game if we compare it with the last three we played.”

The last three matches haven‘t exactly gone the way Bento and aggrieved South Koreans had hoped. They had a scoreless draw with Iraq to open the final round, and then beat Lebanon 1-0 and Syria 2-1 -- both highly unsatisfying results against heavy underdogs.

These results leave South Korea in second place in the group with seven points. Iran sit atop the group with nine points from three consecutive victories.

The top two teams from each of the two groups will punch tickets to next year’s World Cup in Qatar. The two third-place teams will meet in a playoff match, and the winner will then advance to the last-chance intercontinental playoff.

South Korea have never defeated Iran in Tehran, with two draws and five losses so far. But Bento said he won‘t worry about past results and will keep the team’s focus on the match at hand.

“We know that we are going to face a very good team that achieved a very good result in the last three games, a team with very good players and experienced players, very good organization in all the moments of the game,” Bento said. “What we think in every game is to reach three points. In order to reach our goal, we must be able to play a very good game and not make too many mistakes.”

“I think this match will likely be determined by one goal,” Jung said. “This match is important for us not because we‘re facing Iran, but because we could reach top of the group in this match. Iran are a strong team, but I think we can still exploit some part of their game.” (Yonhap)