"Hunmongjahoe," a Hangeul study guide, at the National Hangul Museum of Korea. Photo © 2020 Hyungwon Kang
The Korean language has evolved over the millennia amassing an extensive lexicon.

Currently, the Korean online dictionary has more than 1.1 million words, the largest number of all languages. For reference, the total number of words in English is about half that.

No wonder, the US State Department, which rates languages according to the level of difficulty their diplomats have in reaching “Professional Working Proficiency,” rates learning the Korean language as one of the hardest to learn.

One of the key characteristics of the Korean language is that it is a voiceless consonant language, similar to the sounds of nature. The English language, on the other hand, has many voiced consonants which create sounds by vibrating the vocal cords.

“English pronunciation doesn’t make sense. For example, the pronunciation of ‘hat’ becomes something else when ‘w’ is added in front of it and it becomes ‘what,’” said the late Curt Teller, an immigrant to the US from Austria who spoke German, Spanish and English.

There are foreigners in Korea who do not know English. They don‘t have to. They can learn Hangeul.

Compared to immigrants in the United States, who struggle to learn the English language no matter how long they have lived in the states, immigrants and foreign workers in Korea have a much smoother learning experience with Hangeul literacy. 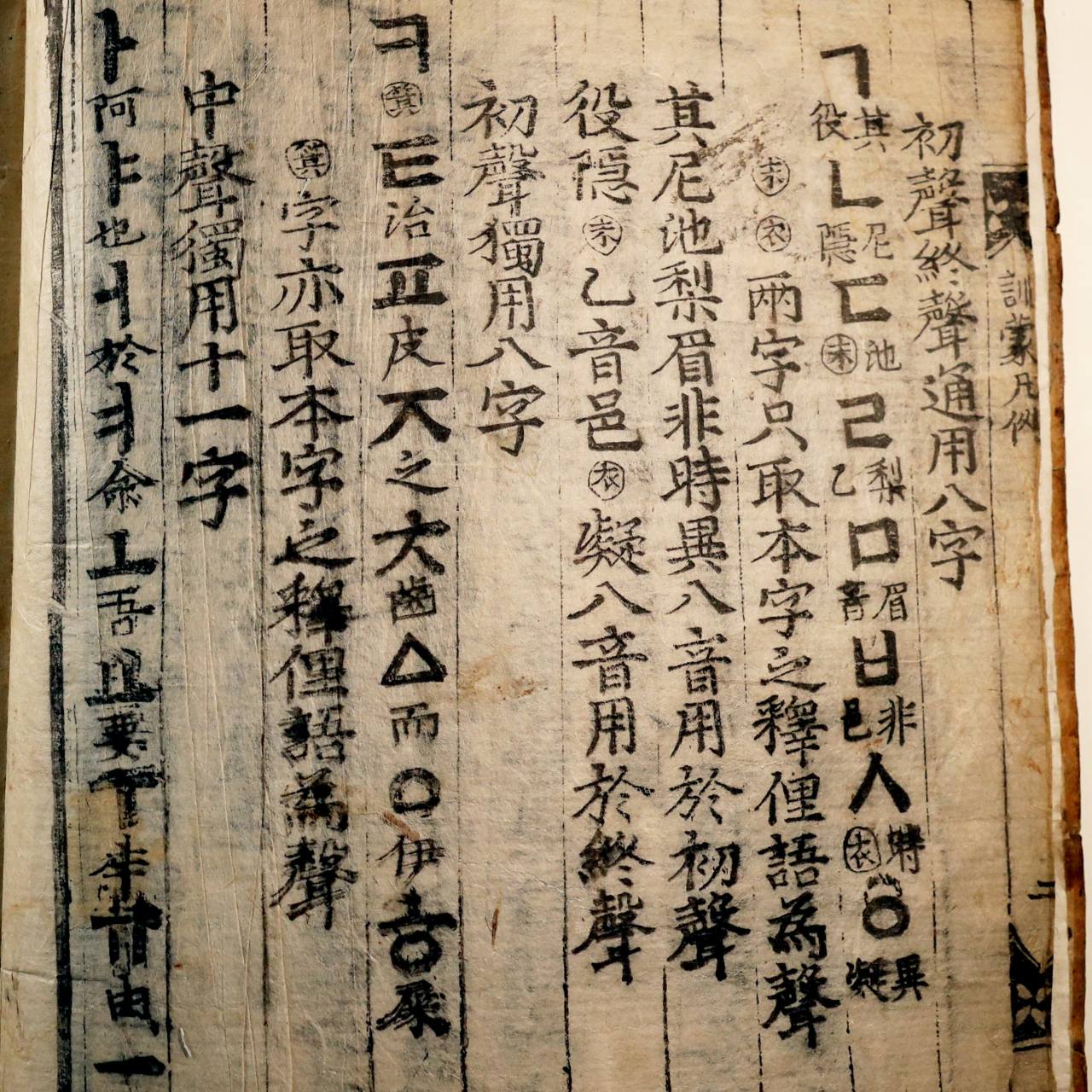 "Hunmongjahoe," a Hangeul study guide, at the National Hangul Museum of Korea. Photo © 2020 Hyungwon Kang
The Korean writing system, the Hangeul, is considered to be the most scientific phonetic alphabet system.

The late James McCawley (1938-1999), a University of Chicago linguist, once said that “Hangeul is the most ingeniously devised writing system that exists. It’s the only writing system in the world that divides sentences not only into words, syllables and individual sounds but also articulatory features.” 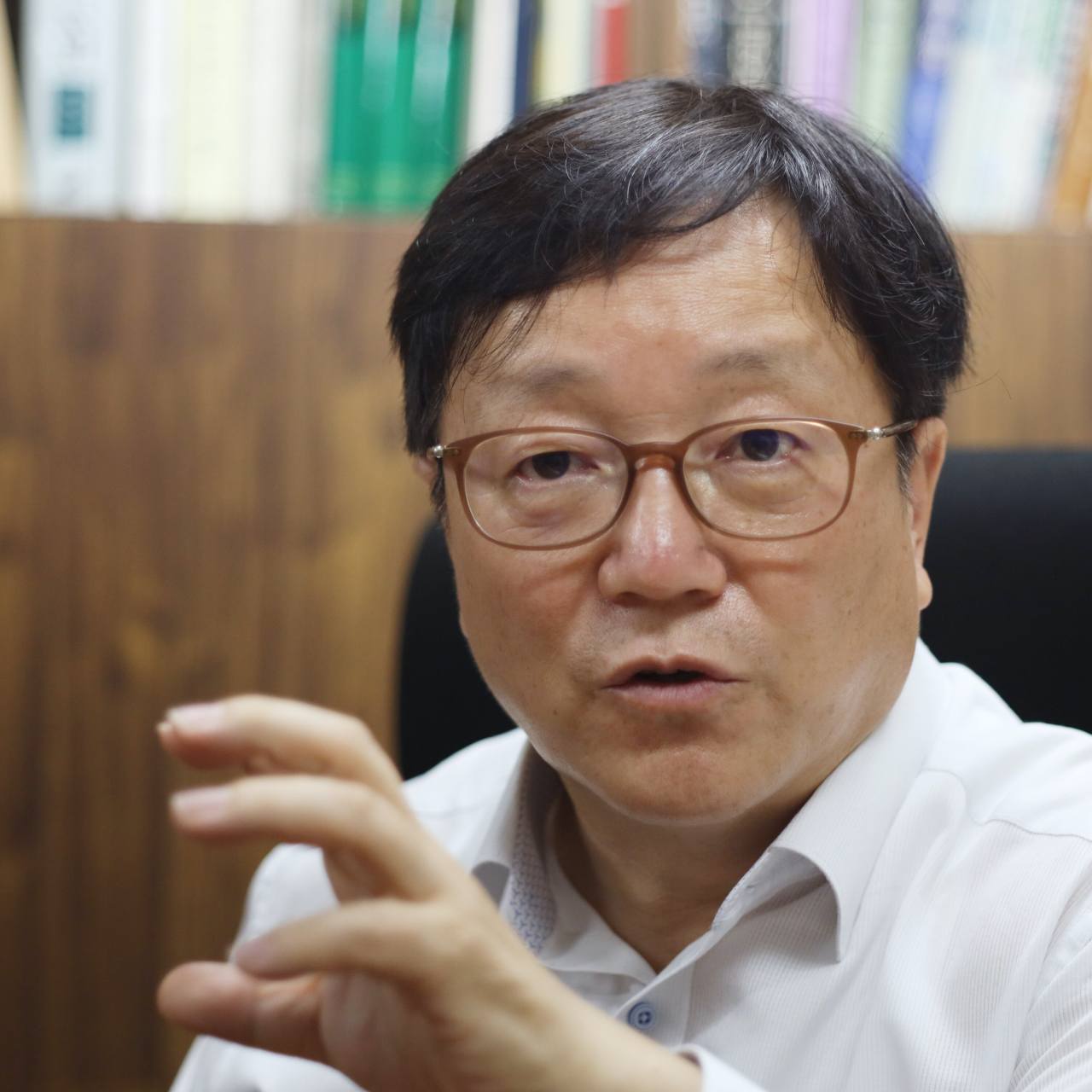 Hangeul has “consonant, vowel, consonant” distinctively packaged all in a single syllable. There is a clear definition of syllables and words which nicely fits in the digital ecosystem.

“The superiority of Hangeul is that it can articulate complete expressions in shorter syllables. The syllable division is clear and Hangeul can create words with simplicity with Hanja-based words,” said Lee. 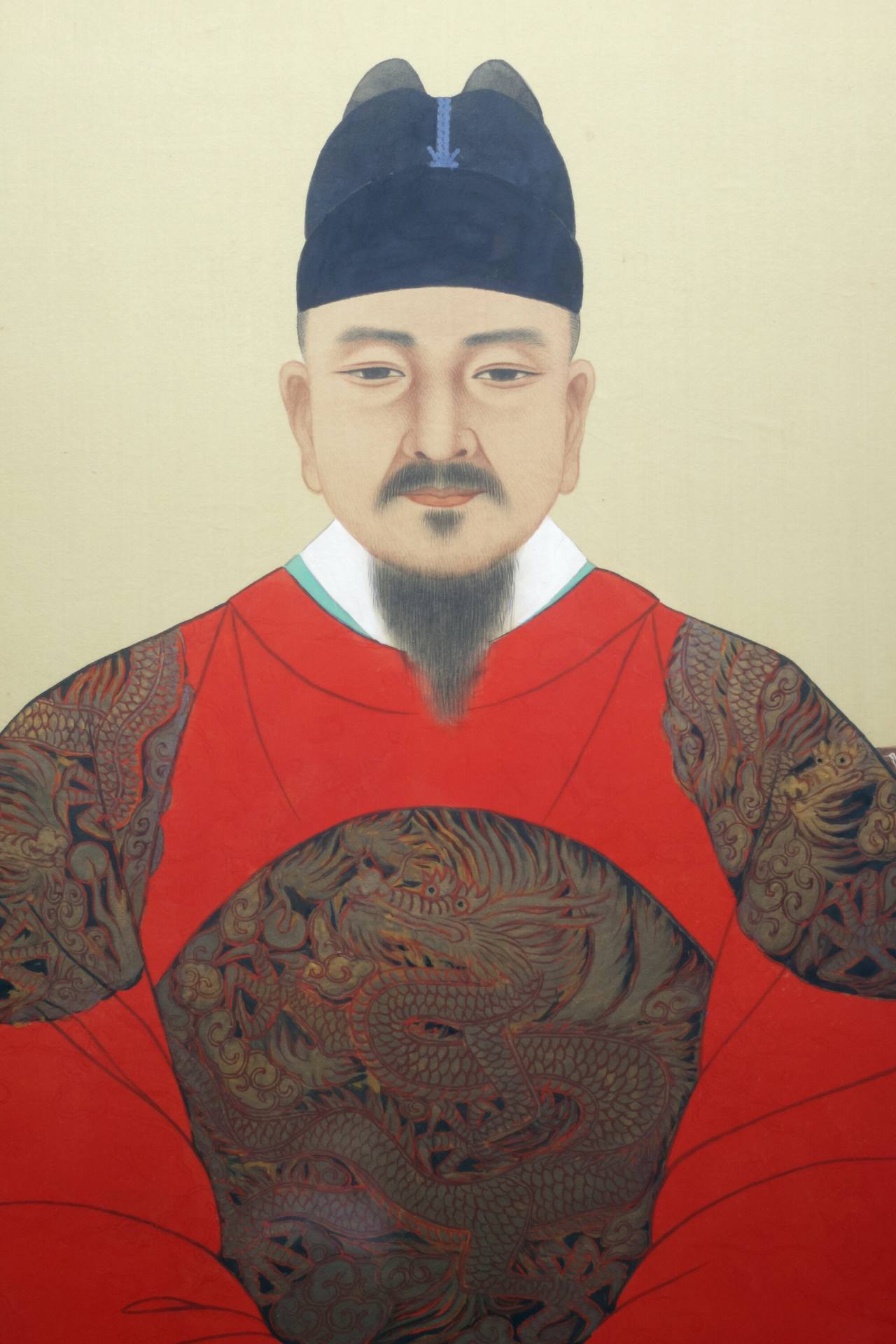 A picture of King Sejong the Great, who invented the Hangeul alphabet, is on display at the Royal Portrait Gallery in Jeonju, Korea. Photo © 2021 Hyungwon Kang
While King Sejong the Great introduced Hangeul in 1443, it wasn’t until 1527 when Choi Se-jin introduced the study book Hunmongjahoe, providing each Hangeul letter its respective name, that people were able to learn Hangeul along with Hanja characters.

The Hunmongjahoe enabled the written language to match the speaking language of the Korean people in the 15th century.

Ever since the ancient Dongyi people invented the Oracle bone script, which was refined into Hanja characters during the Han dynasty (202 BCE–220 CE), Hanja characters have been the common written language system shared by East Asian cultures. Korean Hangeul completed the original ideogram Hanja characters with phonetic letters.

In East Asian cultures, which use writing systems based on Hanja characters, Vietnamese, Japanese and Chinese languages typically use the English alphabet as a pronunciation guide to select words when typing into smartphones or computers. Korean Hangeul users have the efficiency and ease of using the Hangeul alphabet directly.

During Japanese colonial rule (1910-1945) when the use of Korean language was suppressed, the Korean Language Society, a secret group of Hangeul experts gathered all known words in the Korean language, which has quite a diverse set of local dialects.

The “Hangeul Spelling Unification Guide” was released on Oct. 19, 1933, which was the known date of the 487th anniversary of the promulgation of Hangeul by King Sejong the Great in 1446.

But when the 1443 Hunminjeongeum, National Treasure No. 70, the original book introducing the creation of Hangeul alphabet, was found in 1940, the original Hangeul promulgation date of Oct. 9, 1443 was confirmed for the first time. Thus, Oct. 9 has become the “Hangeul Day,” a national holiday in Korea.

The Great Korean Hangul dictionary, which was conceived in 1929, was first printed in 1947, two years after the liberation from Japanese colonial rule. 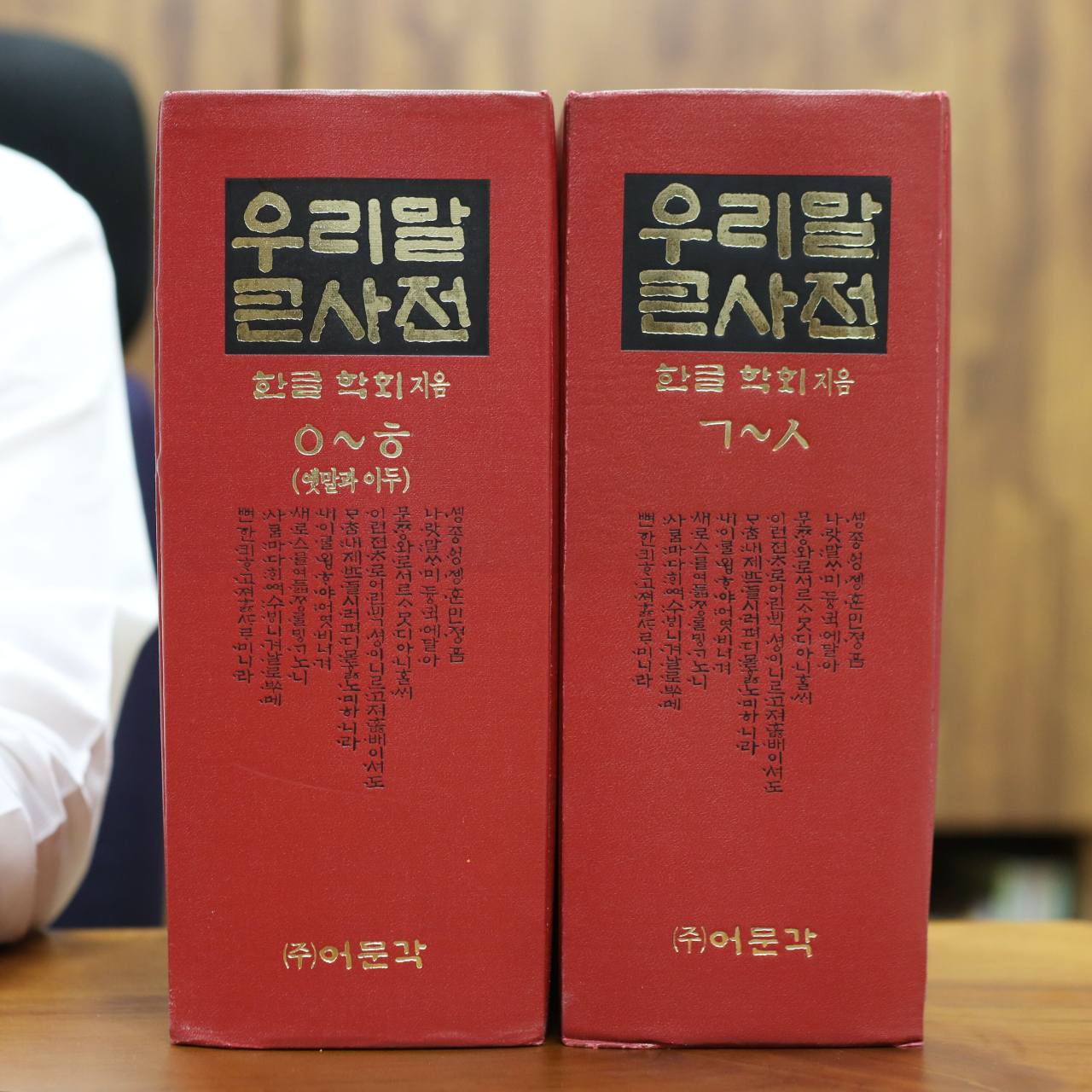 One of the last printed editions of the Great Korean Hangul Dictionary, published in 1994. Photo © 2020 Hyungwon Kang
Many Hangeul researchers died in prison and were persecuted for their work on the Hangeul dictionary project, which the colonial authorities sought to block.

In its last printed version published in 1994, the Great Korean Hangul dictionary contains 450,000 words, not including names and names of places, in a whopping 5,496 pages. The dictionary is no longer being printed.

Today‘s online dictionary has more than 1.1 million words, the most of any language on the internet. According to researchers, 55 percent of Korean words have roots in Korean and Hanja characters, 40 percent in purely Korean words while the rest of the words have been adopted from foreign languages.

New words are created almost daily. For example, a Korean word “deuk” which means “to earn” or “to achieve” is combined with “tem” from “item” in English to form a new word “deuktem” which means “serendipitous find” or “unexpected find of something of value or pleasant in nature.”

During the COVID-19 Pandemic, Koreans invented two additional variations to the word “mask” to describe different ways of donning masks. The new Hangeul word to describe a mask covering below the nose is called “kosk” as in “ko,” the nose, and “mask.” Wearing a mask only covering the chin is called a “teoksk,” as in “teok,” the chin, and “mask.”

One of the most significant words in Korean is “geosigi” which can mean a whole range of things, including “that, which, something difficult or awkward to say, male sex anatomy,” just to name a few.

In fact, geosigi is a word that will be whatever you want it to be in the context of what you want to say. It’s similar to “whatchamacallit” in American English.

People typically have no trouble understanding the intended meaning of the word “geosigi,” whatever it was meant to be.