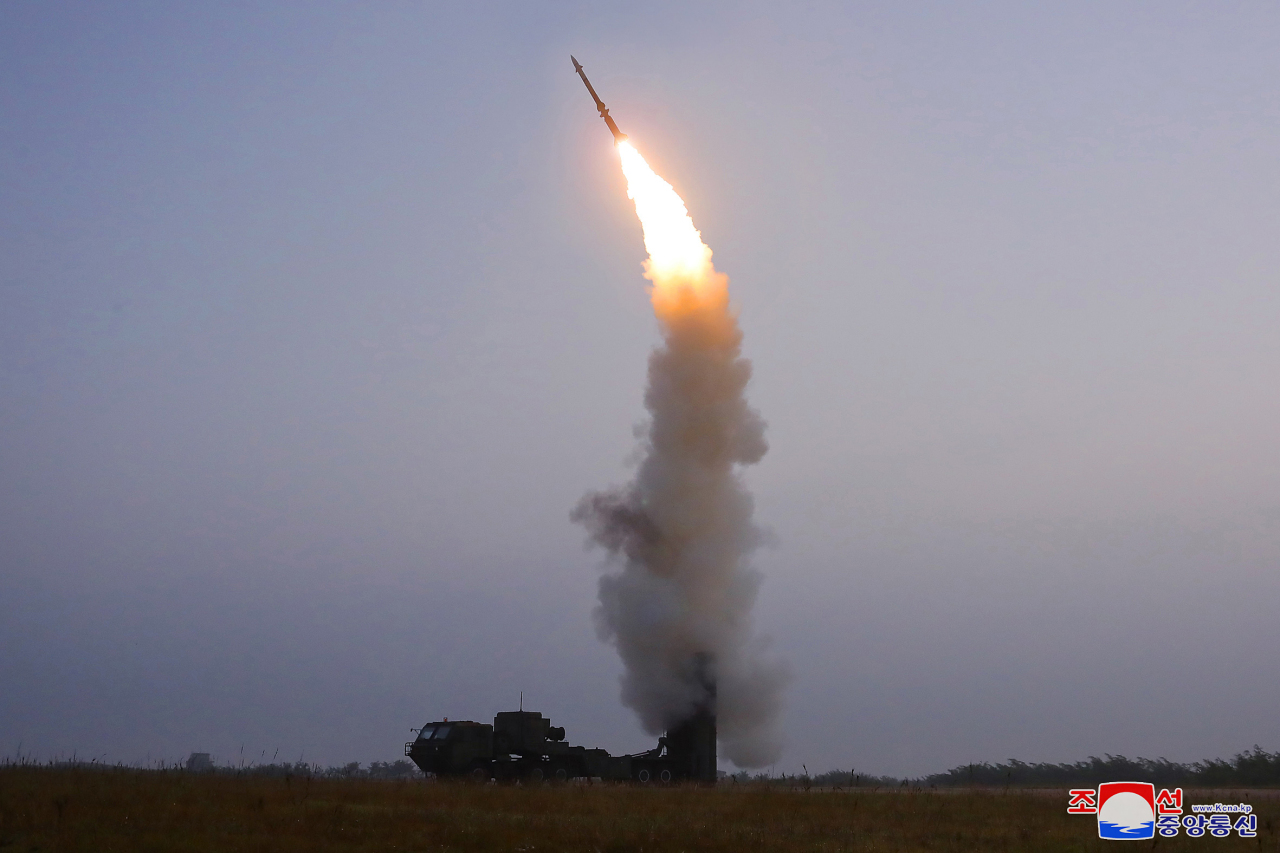 North Korea said it test-fired a new type of anti-aircraft missile being launched a day earlier. (KCNA-Yonhap)
North Korea has continued its nuclear and ballistic missile programs this year, despite international sanctions and a dire economic situation exacerbated by the COVID-19 pandemic, according to a UN report on Tuesday.

A panel of experts monitoring sanctions on Pyongyang, in a report sent to the UN Security Council, said the North “continued to seek material and technology for these programs overseas.”

“Despite the country’s focus on its worsening economic travails, the Democratic People’s Republic of Korea continued to maintain and develop its nuclear and ballistic missile programs,” the report said, referring to the North by its official name.

The report, which is produced twice a year, covered updates on the implementation of sanctions from February to August. Thus it did not include Pyongyang’s flurry of missile tests in September, which included the firing of two ballistic missiles in violation of UN resolutions.

The report noted that there were no test launches of intercontinental ballistic missiles or nuclear weapons during the period, but said the regime staged a new short-range ballistic missile test “combining ballistic and guidance technologies.”

The UNSC has imposed increasingly strong sanctions on the regime since its first nuclear test in 2006. It has banned key exports, including coal and other commodities, and imports of oil products, as well as financial transactions, to get Pyongyang to give up its nuclear weapons.

The report said the North’s exports of banned items continued, but at a “much reduced level,” while its imports of oil products fell substantially in the first half of 2021.

“Maritime and financial investigations demonstrated increasing sophistication by both vessels and the management and ownership structures supporting them in order to evade sanctions,” it said.

The experts raised concerns about the North’s cyberattacks, saying Pyongyang had targeted defense industries around the world as well as pharmaceutical companies developing COVID-19 vaccines.

They said they would continue to investigate North Korea’s involvement in global cyber activities and look at collaboration between North Korean academics and universities and scientific institutes abroad, “focusing on studies with potential applications in weapons of mass destruction programs.”

The report also mentioned a North Korea-linked oil tanker detained in South Korea in May. The vessel -- disguised as a Mongolian-flagged vessel named Shun Fa -- turned out to be Billions No. 18, which was sanctioned by the UN in 2018 for supplying oil to the North.

The experts also took note of the deepening humanitarian crisis amid the COVID-19 pandemic. The North has suffered chronic food insecurity for years, but the pandemic has exacerbated the situation, as the North, which relies on food and other materials from China, suspended all trade to prevent the spread of the coronavirus.

“The country’s blockade in response to the COVID-19 pandemic has continued fundamentally to impact the movement of people and goods, both licit and illicit, within, into and out of the country,” it said.

But the experts added that the COVID-19 blockade meant the relative impact of the sanctions on the humanitarian situation had probably diminished.

“With trade all but stopped by the blockade, and last year’s harvest badly affected by floods, the current prospects of the wider DPRK population are poor,” they said.