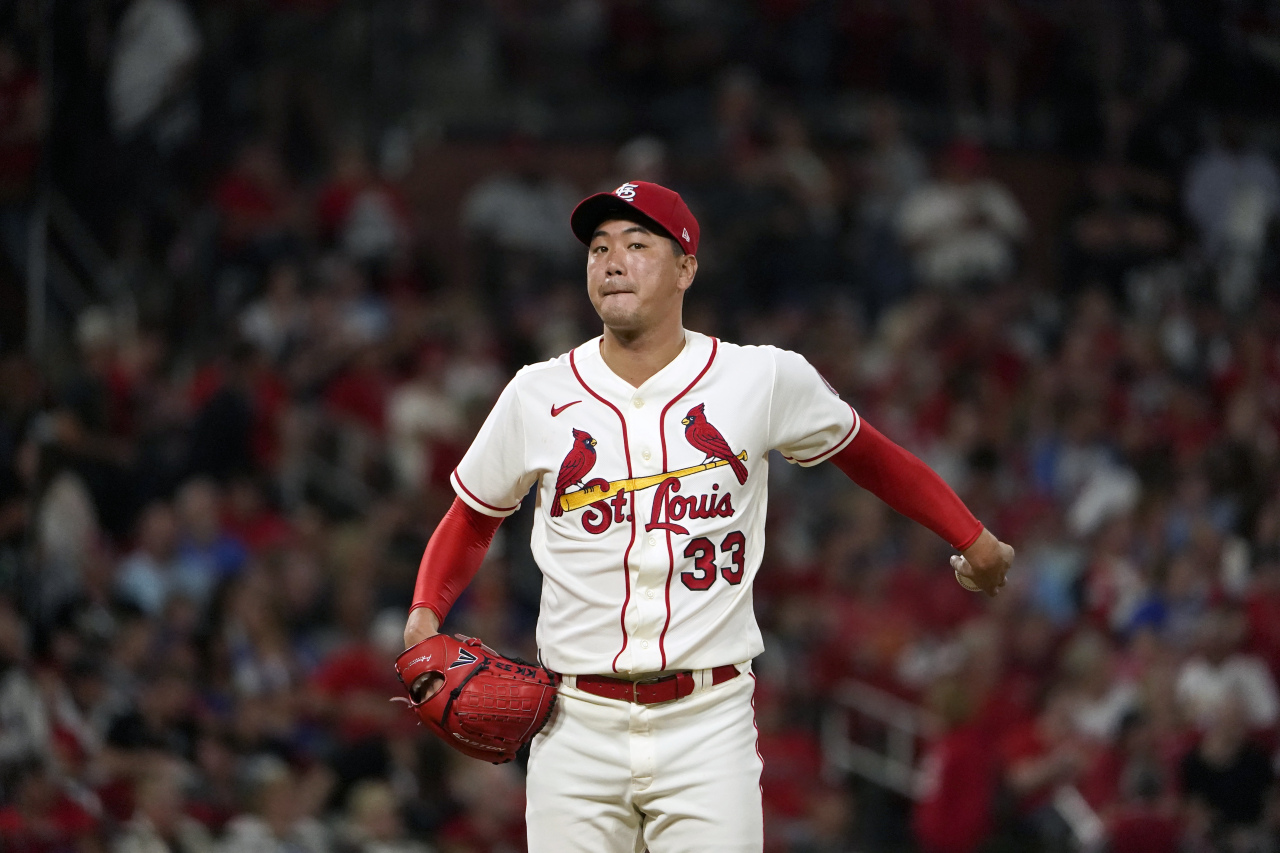 In this Associated Press photo, Kim Kwang-hyun of the St. Louis Cardinals warms up before pitching to the Chicago Cubs in the top of the sixth inning of a Major League Baseball regular season game at Busch Stadium in St. Louis last Saturday. (AP-Yonhap)
For the six South Korean players who saw regular season action in Major League Baseball (MLB) in 2021, it was mostly a disappointing campaign, with a couple of them hoping for a chance to change the narrative in the postseason.

Toronto Blue Jays' starter Ryu Hyun-jin, the longest-tenured member of the contingent, won his final start of the season in Toronto on Sunday (local time). His five innings of two-run ball helped the Blue Jays get past the Baltimore Orioles 12-4 at Rogers Centre.

Ryu finished the year at 14-10 with a 4.37 ERA, as he matched a career high in wins but also posted his worst ERA for a season.

The former Cy Young Award runner-up was 8-5 with a 3.56 ERA in the first half but stumbled to a 5.50 ERA in the second half while posting a 6-5 record. Ryu made a career-best 31 starts but surrendered a career-worst 24 home runs.

At 91-71, the Blue Jays ended a game out of a Wild Card spot in the American League (AL). Their two AL East rivals, the New York Yankees and the Boston Red Sox, both finished one game ahead of Toronto.

Kim Kwang-hyun of the St. Louis Cardinals and Yang Hyeon-jong of the Texas Rangers were two other left-handers hailing from South Korea, and both of them had seasons they'd rather forget.

Kim began his second big league season on the injured list (IL) with lower back problems. The same issues landed Kim on the IL again in June, and Kim was sidelined in August with left elbow inflammation.

He returned in late August but was moved to the bullpen in early September, having been unable to earn the trust of manager Mike Shildt to pitch deep into close or tied games.

Kim finished the regular season at 7-7 with a 3.46 ERA in 27 games, including 21 starts. Kim's role in the bullpen remains unclear as the Cardinals are set to visit the Los Angeles Dodgers for the National League Wild Card Game on Wednesday.

Yang signed a minor league contract with the Rangers in February, after 14 mostly successful seasons for the Kia Tigers in the Korea Baseball Organization (KBO). Yang received some spot starting assignments but failed to capitalize on them. He was designated for assignment twice during the season and ended his first and likely last US season in the minor leagues.

Yang went 0-3 with a 5.60 ERA in 12 appearances, including four starts. He is scheduled to arrive back in South Korea on Tuesday and is expected to have reunion talks with the Tigers.

San Diego Padres' infielder Kim Ha-seong arrived in American with much more fanfare than Yang, signing a four-year, US$28 million contract last December. The All-Star shortstop for the Kiwoom Heroes in the KBO failed to live up to the deal, however, batting only .202/.270/.352 with eight home runs and 34 RBIs in 117 games. On defense, Kim split his time at shortstop, second base and third base.

Kim had mostly been a shortstop in the KBO, with occasional appearances at third base. But with the budding superstar Fernando Tatis Jr. at shortstop and MVP candidate Manny Machado at the hot corner, Kim knew he would be moved around the diamond to find playing time. Kim still signed with the Padres because he felt he would have the best chance of winning a World Series title with them.

The Padres, though, ended up being perhaps the most disappointing club this year. They went from being tied for the best record in MLB at 34-20 on May 30 to missing the postseason entirely at 79-83.

Even with Choi sidelined for nearly half the season, the Rays posted the best record in the AL at 100-62. They were the World Series runners-up last year, when Choi became the first South Korean position player to appear in a World Series game

Utility player Park Hoy-jun made his major league debut with the New York Yankees in July, after seven years in the minors, and then was traded to the Pittsburgh Pirates later that same month.

Park had more opportunities to play on the rebuilding Pirates than the contending Yankees, and the 25-year-old appeared at six positions for his new club: all three outfield positions, plus second base, third base and shortstop.

Park tore up Triple-A pitching while in the Yankees organization but batted .199/.299/.339 with three homers and 14 RBIs in 44 games for the Pirates while getting his first cup of major league coffee. (Yonhap)