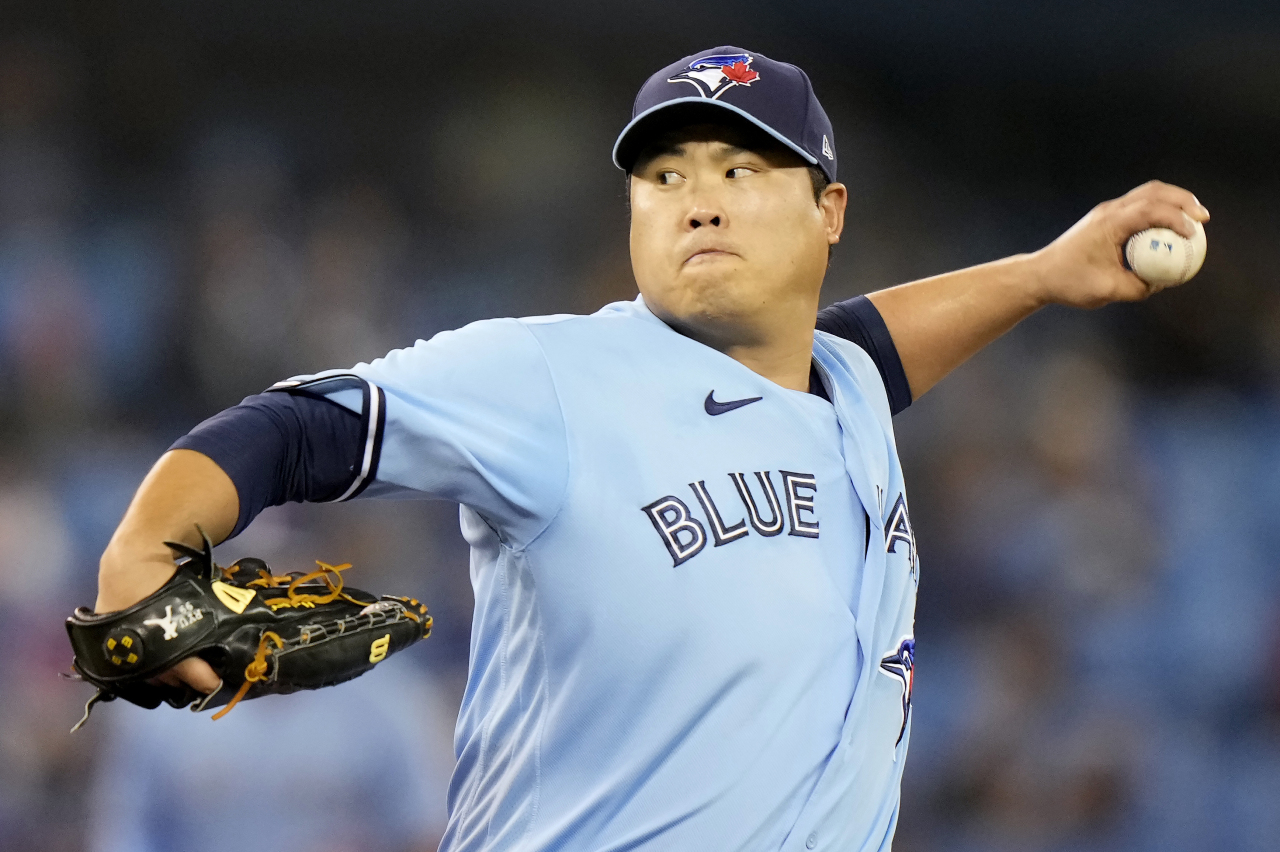 In this Canadian Press photo via Associated Press, Ryu Hyun-jin of the Toronto Blue Jays pitches against the Baltimore Orioles in the top of the first inning of a Major League Baseball regular season game at Rogers Centre in Toronto on Sunday. (AP-Yonhap)
Backed by an explosive offense, Toronto Blue Jays' Ryu Hyun-jin has matched his career high in wins in a must-win regular season finale, though it wasn't enough to get the club into the postseason.

Ryu held the Baltimore Orioles to two runs over five innings in a 12-4 victory at Rogers Centre in Toronto on Sunday (local time).

Ryu, who gave up six hits and struck out seven, finished the season at 14-10 with a 4.37 ERA. He has now won 14 games in a season for the fourth time in his career, though the ERA was his worst for a full season in the majors.

The Blue Jays finished at 91-71 but just missed out on a Wild Card spot in the American League.The Blue Jays would have ended up in a tiebreaker with a combination of their victory and a loss by either the New York Yankees or the Boston Red Sox on Sunday. The Blue Jays held up their end of the bargain, but the Yankees beat the Tampa Bay Rays 1-0 to secure one of two Wild Card berths at 92-70. Then minutes after Toronto's win, the Red Sox defeated the Washington Nationals 7-5 to grab the other Wild Card spot, also at 92-70. By virtue of winning the season series, the Red Sox will host the Yankees in the one-and-done Wild Card showdown on Tuesday.

Both New York and Boston scored in the ninth inning for their wins.

The Blue Jays couldn't have asked for a better first inning from Ryu, who retired the side on nine pitches and struck out two batters.

Ryu's teammates quickly spotted him a 3-0 lead in the bottom first, as they ambushed starter Bruce Zimmermann for three runs on five hits, including a leadoff home run by George Springer.

And Ryu continued to look sharp in the second inning, striking out the first two batters for another clean frame.

Ryu gave a run back in the top third, when Tyler Nevin smacked a solo home run. Pat Valaika followed up with a single, but Ryu got three straight groundouts to escape the inning.

The Blue Jays then blew the game open in the bottom third, with Springer's grand slam putting them up 9-1.

Ryu pitched around a couple of singles in the top of the fourth inning. He had a comebacker go off the inner part of his right leg but stayed in the game.

Back in the dugout, Ryu watched the Blue Jays add two more runs in the bottom fourth for an 11-1 lead, on Teoscar Hernandez's two-run single.

Ryu gave up two straight singles with one out in the fifth, and the Orioles got their second run off Ryu on a throwing error by second baseman Marcus Semien.

Ryu then hit a batter and walked another to load the bases before getting Pedro Severino to fly out to right field.

It turned out to be the final out recorded by Ryu. Semien's solo home run in the bottom fifth gave the Blue Jays a 12-2 lead, and the club didn't need more from the left-hander after five solid innings.

Though Toronto's season ended on a bitter note, Ryu got a measure of personal redemption in this game.

In four starts prior to Sunday, Ryu had gone 1-2 with a 9.20 ERA and had surrendered five home runs in just 14 2/3 innings. He was also sidelined briefly with neck tightness along the way.

Ryu looked close to his vintage self in this one. He got four of his seven strikeouts with the changeup, and 58 of his 77 pitches went for strikes. (Yonhap)