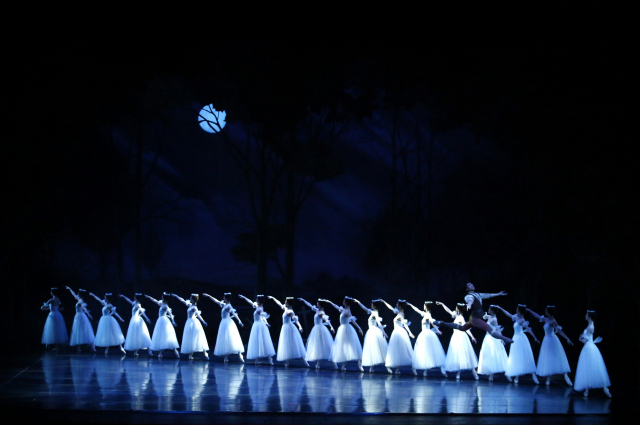 Scene from the Universal Ballet Company’s staging of “Giselle” (UBC)

The Universal Ballet Company is to stage “Giselle” at the Seoul Arts Center from Oct. 29-31.

The classic ballet is one of the most well-known and widely performed works of the Romantic era. Adolphe Adam wrote the music. Most performances of “Giselle” use the choreography staged by ballet legend Marius Petipa.

It tells the story of a young peasant girl named Giselle. She falls in love with Albrecht, a nobleman in disguise. After learning that Albrecht has betrayed her, Giselle dies of heartbreak and is buried in a grave near a forest.

In the forest, there are the Wilis, the spirits of maidens who died after being betrayed by their lovers. Albrecht comes to visit Giselle’s tomb and the Wilis try to lure Albrecht. The spirit of Giselle tries to protect her lover.

The ballet troupe’s artistic director Julia Moon was the first Asian guest principal to go onstage as Giselle with the Kirov Ballet, now known as the prestigious Mariinsky Ballet troupe, based in Russia.

The UBC had its premiere of “Giselle” in 1985. Since the premiere, the ballet company has toured across the world.