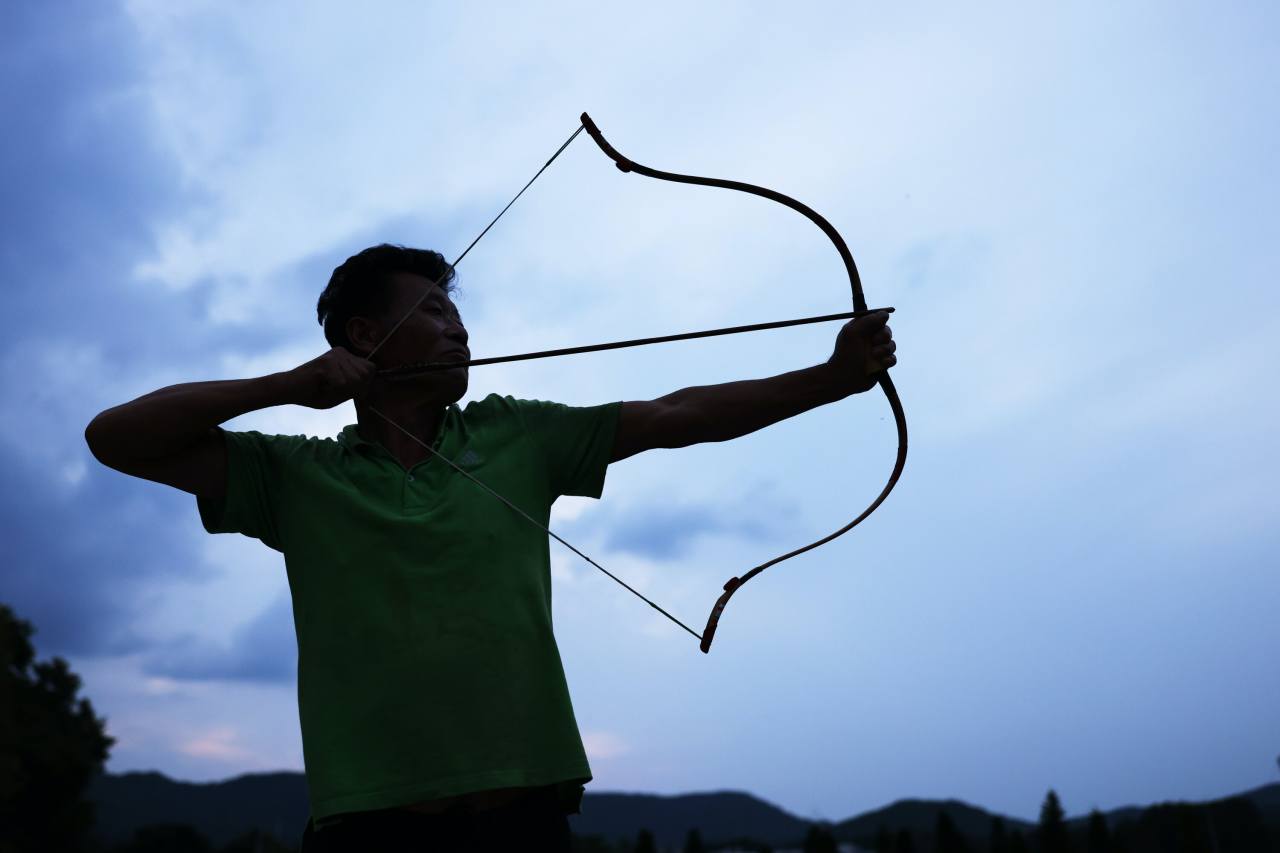 Gakgung maker Kim Gwang-deuk, who has been making the Korean bows since 1997, is testing a finished gakgung in Chungju, North Chungcheong Province. © 2021 Hyungwon Kang
To say that Korea wouldn’t be here today without Korean Gakgung Bow would be an understatement!

Since ancient times, Gakgung, which means “bow made with animal horn,” was the weapon of choice for hunting and for protection of Koreans from invaders.

The fact that the majority of Korean land is mountainous makes the bow and arrow a perfect weapon to defend fortresses from invaders. 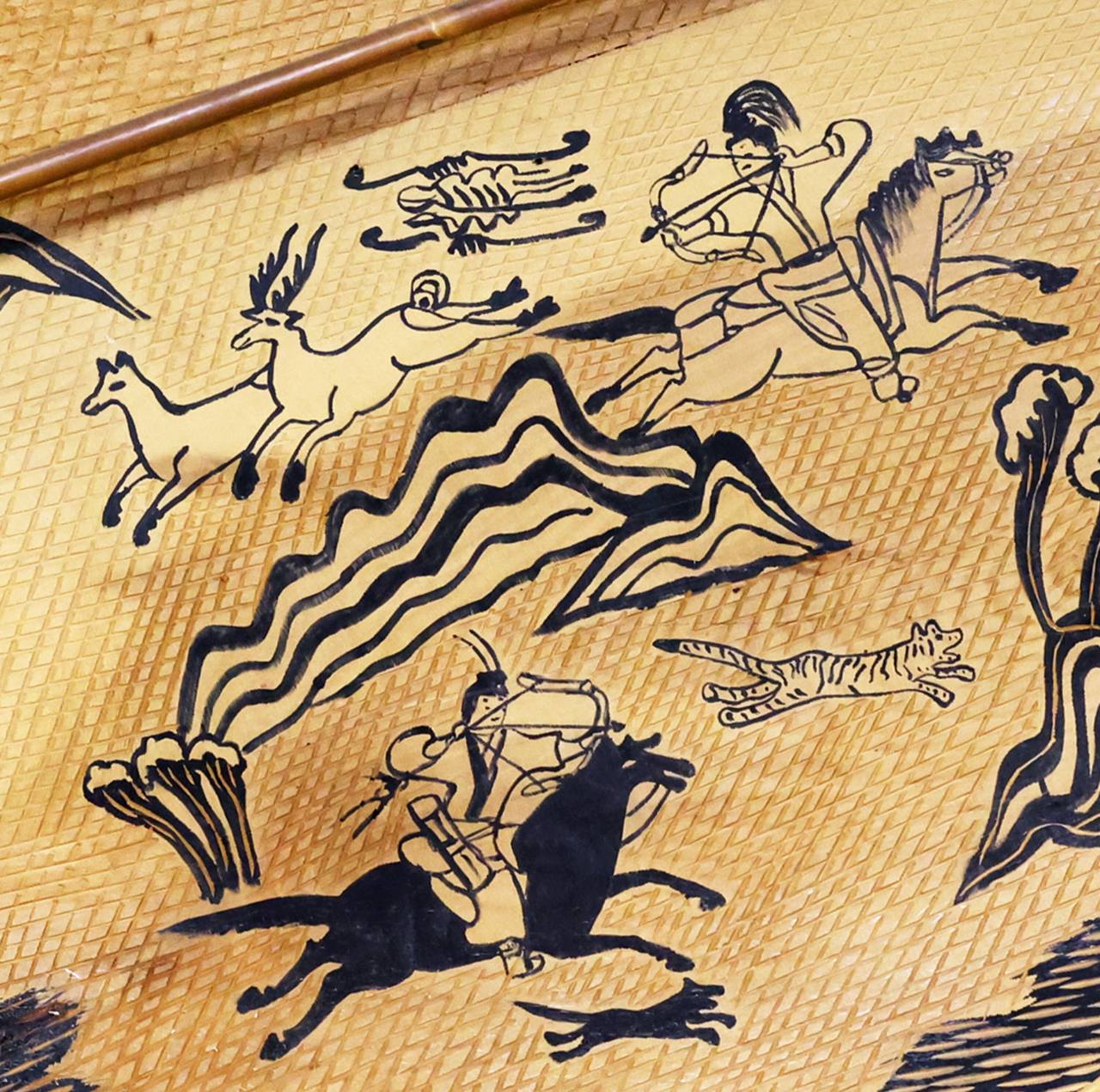 Goguryeo archers hunt using the Korean bow, Gakgung, in this reproduction of the ancient Goguryeo tomb painting by Kim Gwang-deuk. © 2021 Hyungwon Kang
Koreans have always been known to be excellent archers. Neighboring kingdoms were even afraid to compete against Korean archers.

According to Yi Ki-hoon, the author of “Korean history written by China before the Northeast Project,” there is a recorded historical episode during the Tang dynasty when the only female ruler in all of Chinese history, Empress Wu Zetian (624 - 705) wanted to hold an archery competition between Goguryeo archers and Tang archers, she was persuaded against it by her subjects who said, “The Han Chinese archers will not be left as sharpshooters after this competition, so I bow down and pray, please stop this archery competition.”

The Sui dynasty, which Tang replaced in 618, totally failed to win even one Goguryeo fortress during their four wars from 598 to 614, even with their 1.1 million soldiers and sailors, which is considered the largest military campaign in world history, with another million or more logistics personnel to transport war supplies.

Goguryeo, with almost all of their villagers sheltering in hillside fortresses during wars, fended off invaders with bows and arrows while removing food and livestock from their dwellings to deprive invaders of war supplies. 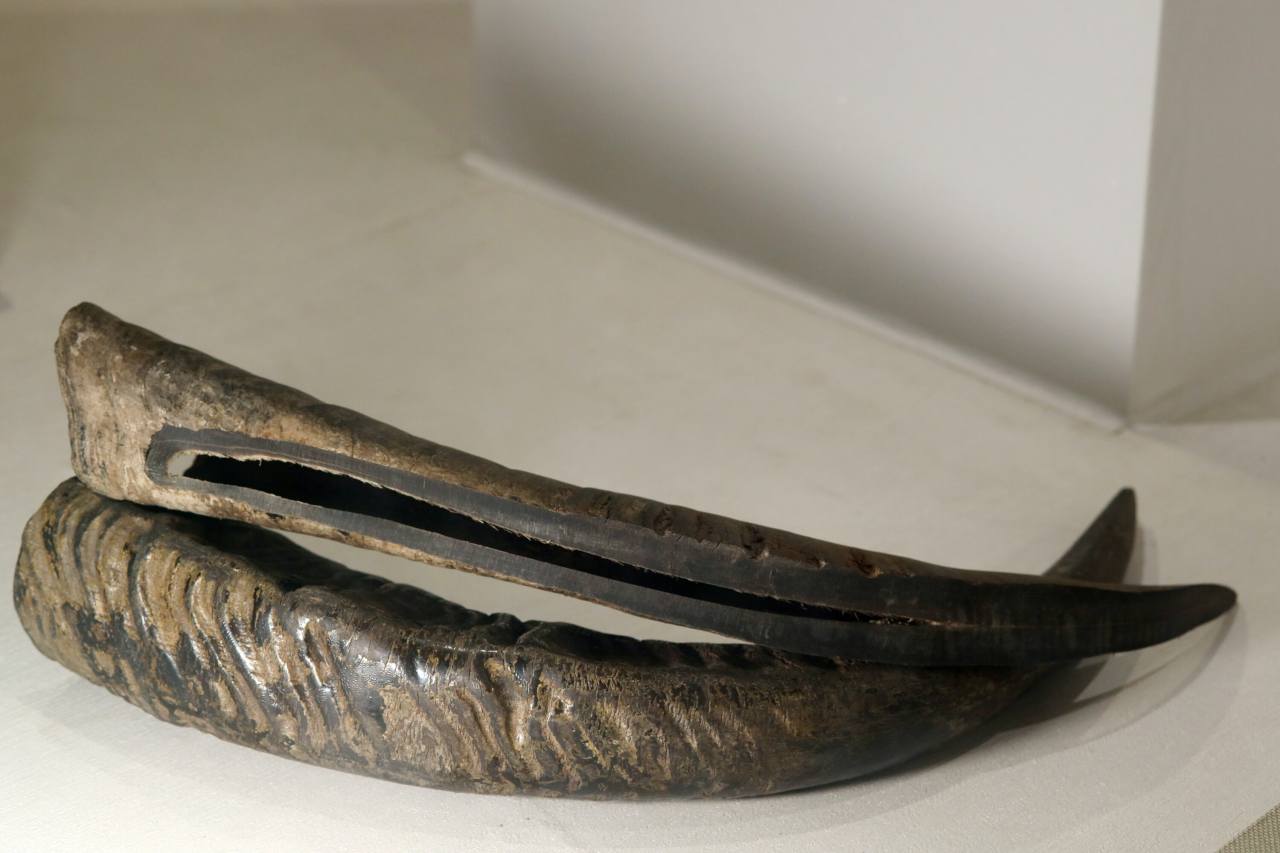 A pair of horns from water buffalo, which are used to make bows, is on display at the bow and arrow museum in Paju, Gyeonggi Province. © 2020 Hyungwon Kang
In fact, until the arrival of guns, archery was the main weapon of choice for Koreans.

Emperor Yang of the Sui dynasty -- who dug up the Grand Canal, the longest canal or artificial river in the world, connecting Beijing to Yangtze River by 612, in preparation for the war against Goguryeo -- was denied a dignified death when the Sui dynasty (581–618) collapsed. Yang was not allowed to commit suicide, instead he was strangled to death by one of his subjects on April 11, 618.

At the tomb of Sui dynasty’s last emperor, Emperor Yang, in Yangzhou, Jiangsu Province, the emperor who failed in his invasion of Goguryeo is remembered as the man who ”Lost the world while causing trouble in Liaodong Peninsula.“ Liaodong Peninsula is located in the former Goguryeo land in the Manchuria region. 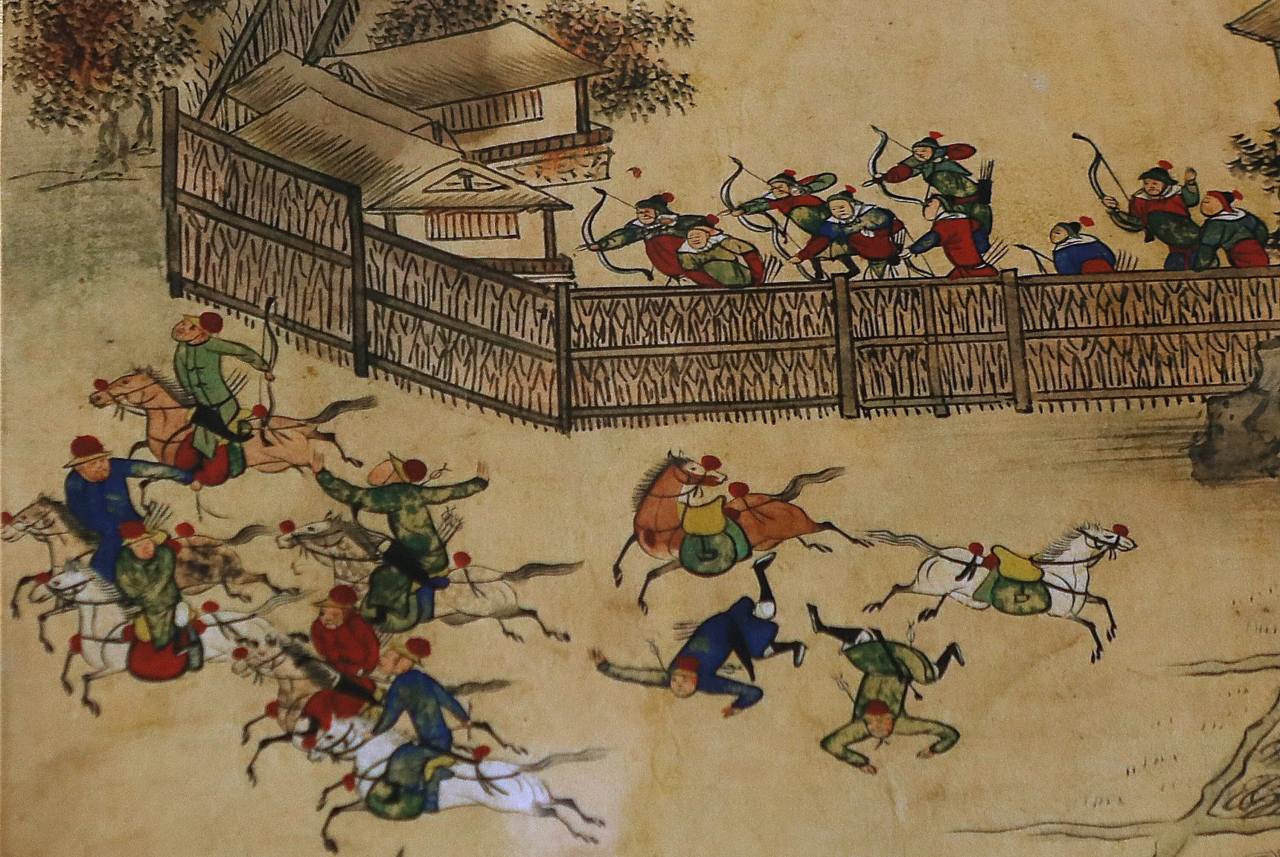 Gakgung bows are used by soldiers in this 1587 painting of “The Wooden Barricade Battle,” in Korea’s Noktundo Delta in the Tumen River at the northern tip of Korea. © 2020 Hyungwon Kang
From 631 to 646, all able-bodied Goguryeo men were pulled into building the ”1000-mile Wall“ just on the east side of the Great Wall of China, along the western frontier of the outskirts of Goguryeo in present-day Liaodong Province, to prevent the invasion of the Tang Dynasty.

The 1000-mile Wall didn’t stop Tang dynasty‘s top ruler, the emperor Taizong Li Shimin who chased out his father and killed his brother to become the second Tang Emperor in 626 to invade Goguryeo. Li Shimin lost one of his eyes to a Goguryeo arrow and died from that wound in the 645 invasion of the Anshi fortress. The impenetrable fortress was possible with Koreans armed with Gakgung bows.

The secret to the Korean composite bow, which hits targets as far as 145 meters away, is in the Gakgung’s explosive power. For reference, the Olympic archery event‘s target distance is 70 meters. 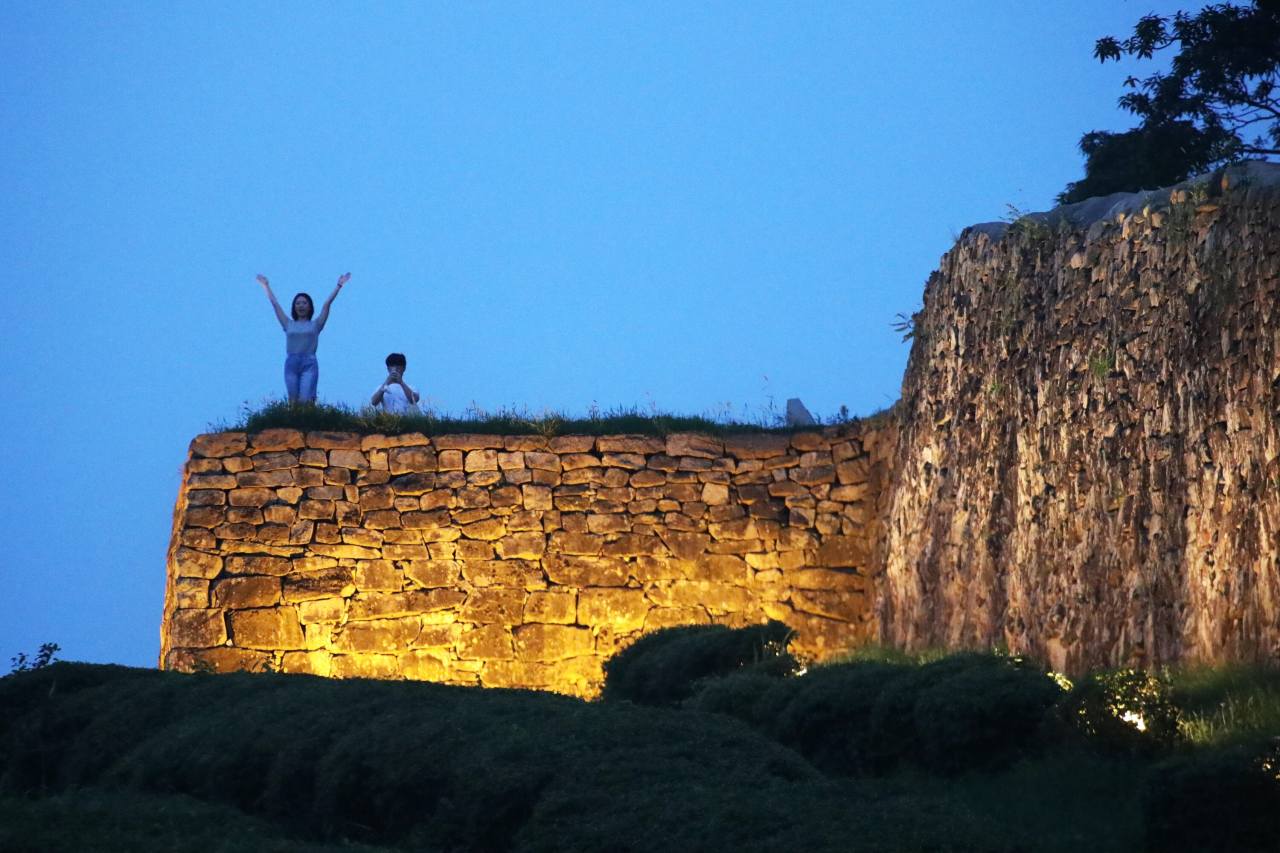 Gochang Fortress in North Jeolla Province ©2020 Hyungwon Kang
The Gakgung’s powerful weapons capability is in the construction of using three types of wood and a pair of horns from water buffalo, wrapped in buffalo tendons.

The process of making Gakgung starts in late fall when the weather gets chilly enough to harden the glue made from croaker air bladder, through the following summer.

Many Kings and leaders in Korean history were excellent archery marksmen.

Jumong (58 BCE - 19 BCE), the founder of Goguryeo, was known for his divine archery skills. In fact, the name Jumong means “expert archer” in Buyeo language. Goguryeo splintered off Buyeo which historians say was around from 10 century BCE.

The earliest stories of Jumong and his archery skills is when he was a kid. According to the tale, his mother made him a toy bow and arrows with which Jumong accurately shot flies.

During the Goryeo Empire, which continued the tradition of Goguryeo through 1392, General Yi Sung-gae, the future king, led an expedition against a horde of Japanese forces at Hwangsan Mountain in southern Korea during one of the final battles of the Great Japanese War of 1380. 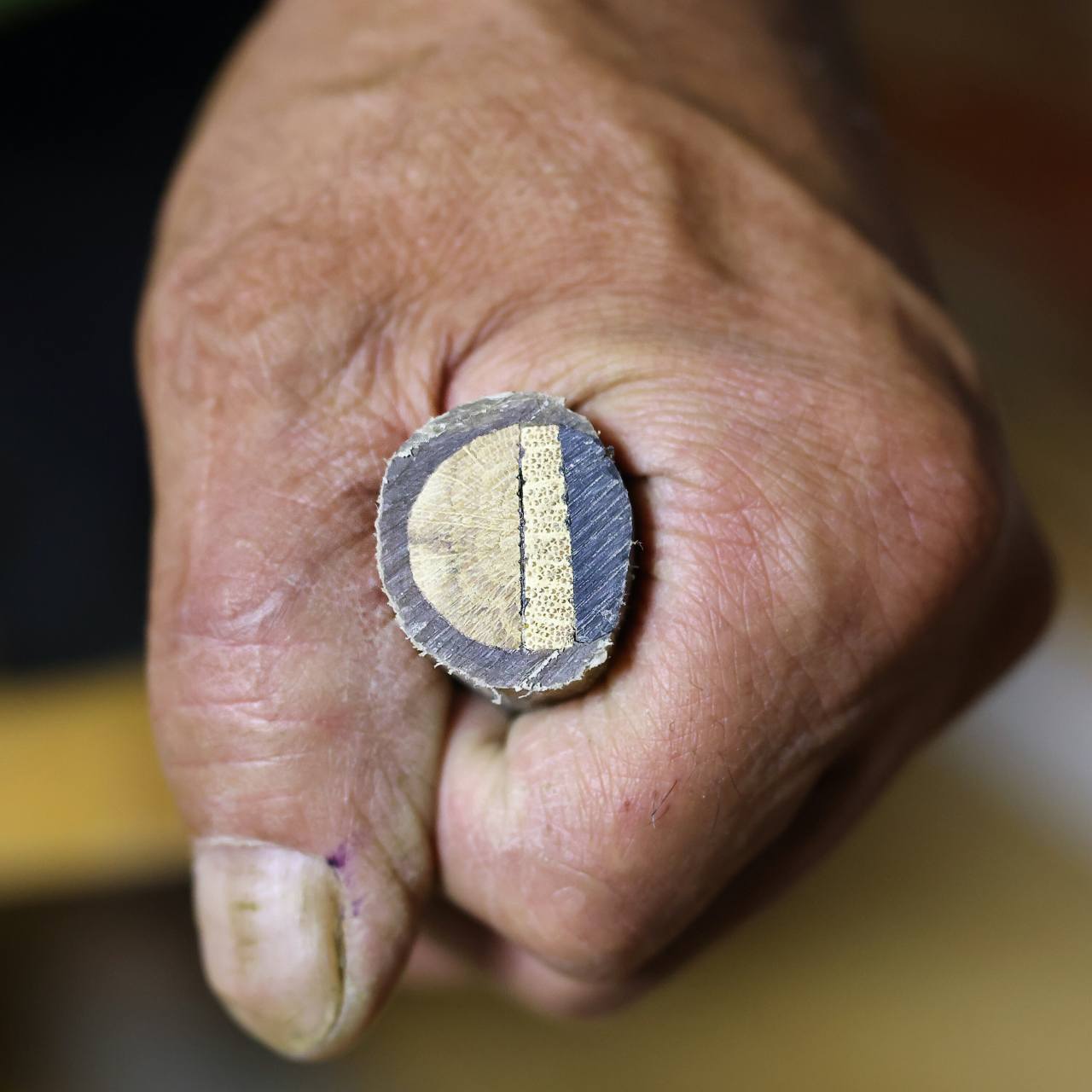 A cross section of a Korean bow shows water buffalo horn (right) bamboo and oak wood wrapped with several layers of cattle tendon, glued with boiled air bladder from a croaker fish. © 2021 Hyungwon Kang
An enemy commander named Agibaldo, in full armor, appeared flanked by a squad of soldiers on both sides. General Yi Sung-gae fired off his arrows, hitting the left eyes of all the soldiers on the left of the enemy commander and the right eyes of all the soldiers on the right side. Then using an arrow with a heavy tip, making a thundering noise, knocked off Agiblaldo’s helmet, and with the next arrow, pierced his neck.

General Yi Sun-sin, the most beloved general in all of Korea’s history, is best known for decimating an overwhelming number of enemy Japanese battleships in the Battle of Myeongnyang, on Oct. 26, 1597.

On April 13, 1592, the day before the first attack of the Japanese Invasion of Korea, Joseon military saw hundreds of Japanese warships anchored just off the Busan coast but took no action. When Admiral Yi Sun-sin heard the news days later, he was heard saying “We could have prevented the Japanese invasions of Korea at an early stage by burning their ships down, had we used fire arrows that night.”


Korean American photojournalist and columnist Hyungwon Kang is currently documenting Korean history and culture through images and words for the future generations. -- Ed.