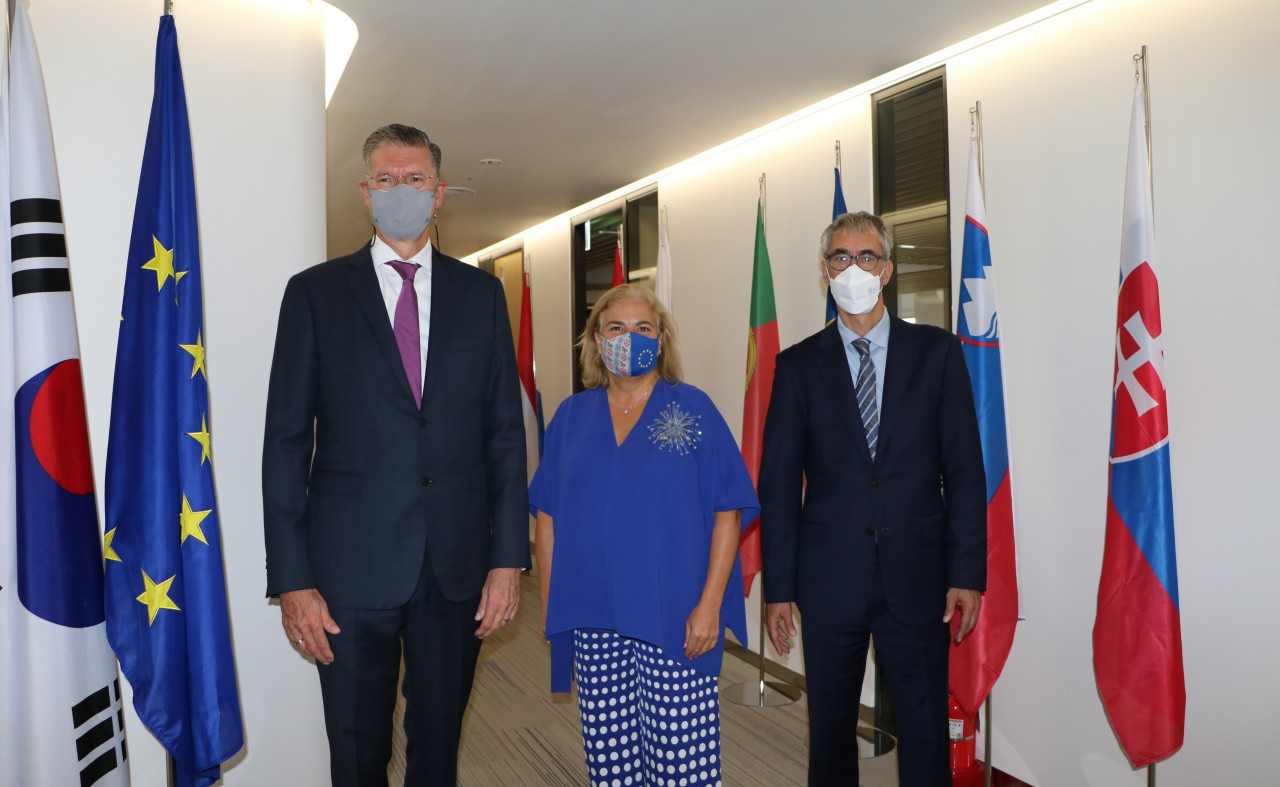 From left: ECCK Chairperson and CEO of Schenker Korea Dirk Lukat, Ambassador of the European Union to the Republic of Korea H.E. Maria Castillo-Fernandez and Christoph Heider, ECCK president, pose for a photo before an online event held Wednesday. (ECCK)
Rules and regulations tend to change too quickly in South Korea without adequate input from stakeholders, often leaving foreign companies doing business here perplexed, the chief of the European Chamber of Commerce in Korea said Wednesday.

“In many instances, the new policies lack the adequate evaluation on whether they will have the desired effect without unintended consequences,” Dirk Lukat, chairperson of the ECCK, said at an online press conference.

The chief and other senior members of the group called for efforts to align local regulations to a global standard, citing a number of challenges they face from market restrictions unfavorable to foreign companies.

Wednesday’s press event was held to introduce the seventh edition of the ECCK white paper, expressing views on the business environment in Korea by ECCK member companies operating in a wide range of industries.

CEOs of companies from fields of industries including health care, food and vehicles attended the event and spoke about key industry issues and suggestions across 16 different sectors.

They cited some areas that could be improved for Korea to catch up with international standards.

In the food and beverages sector, members suggested allowing companies to sell and distribute alcohol via e-commerce platforms. Regulations on food labeling were also mentioned as being too harsh on foreign companies and for limiting customer choices.

The organization’s Passenger Vehicles Committee Chairperson Kim Hong-joong, who is an executive of Mercedes-Benz Korea, asked the government to give more sufficient lead time before changing subsidy policies for eco-friendly cars.

Whether or not a particular model becomes eligible for the subsidy has a huge impact on auto firms’ sales plans, he said, calling for more predictability in subsidy policies.

In the pharmaceuticals sector, the president of Zuellig Pharma Korea, Erwan Vilfeu, encouraged the government to work with companies for drug development to allow patients faster access to innovative drugs in the post-pandemic era.

In addition, ECCK President Christoph Heider highlighted some administrative changes related to international travel in the pandemic era. He recommended the government ease restrictions on inbound travelers who are fully vaccinated.