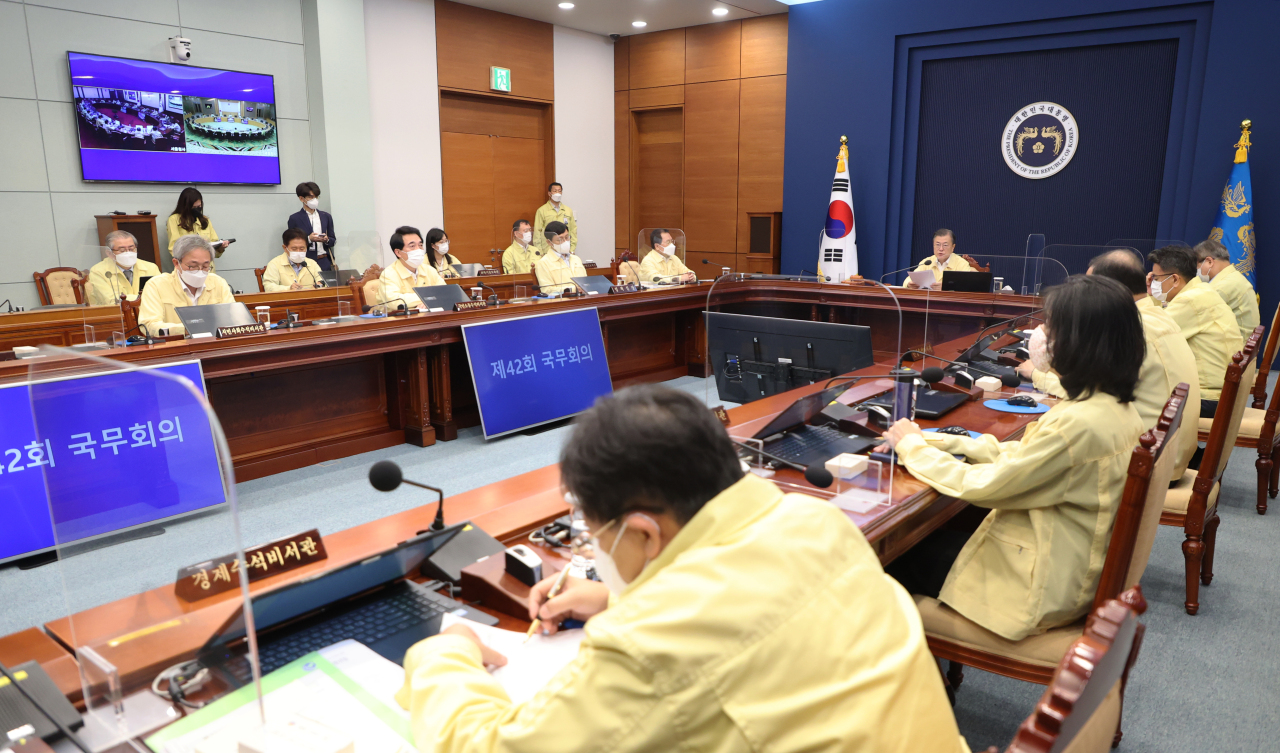 President Moon Jae-in speaks during a Cabinet meeting at Cheong Wa Dae on Tuesday. (Yonhap)
A new law aimed at improving safety and protection for employees from industrial accidents by punishing those responsible has been endorsed by the Cabinet on Tuesday, despite criticisms from both employer and employee groups.

President Moon Jae-in and his Cabinet members approved the enforcement decree for the so-called workplace disaster law, paving the way for its effectuation in January.

The law itself passed the National Assembly in January. It seeks to enhance safety management by increasing punishment of business owners and chief executives for any industrial accidents caused from lax oversight or poor safety management.

The enforcement decree, approved Tuesday, specifies the scope of occupational diseases, the size of the business sites for application of the law, and also on the duties that company chiefs must fulfill for the safety of employees.

According to the new law, business owners and chief executives are subject to a minimum one-year prison sentence, or a fine of 1 billion won ($855,000) in case of deadly industrial accidents, caused from insufficient safety measures. The corporate entity could also receive a fine of 5 billion won.

The enforcement decree stipulates the scope of occupational diseases subject to the law, as diseases caused by, or found to be related to acute poisoning of 199 types of chemical and harmful factors.

Brain and musculoskeletal illnesses, and cardiovascular-related diseases which labor groups have demanded, linking them to overwork, were not included.

A mandatory monitoring and review of work hazard conditions in every six months, has also been stipulated in the enforcement decree.

For companies with more than 500 full-time workers, and construction firms listed within the top 200 of a construction ability assessment should also establish a working unit dedicated to safety and health control.

A company that is convicted for violation of the law will also be made public, according to the new decree. Not only the name of the company, but also the details of the accident relevant to the punishment, and previous cases of past five years will be revealed on the Labor Ministry website for a year.

“The focus of the envisioned law is not on punishment, but on prevention of serious workplace disasters. It will provide as the minimum legal framework for safety,” the government said in a press release.

The new law, however, is receiving backlash from both worker and management sides.

The Federation of Korean Industries, one of the leading business representations here, issued a statement Tuesday to criticize the “ambiguity” in the new law, citing concerns on business contractions and unnecessary lawsuits.

“Smaller companies that lack safety management capabilities, would suffer greatly (from the lack of consideration and details),” FKI said.

Employers have demanded a provision on penalty exemption when the cause of an accident is clearly by the fault of an employee, or by natural disasters, but it was left out of the decree.

Korea Enterprises Federation also pointed out on the vague definitions and description of duty for chief executives.

“We have long demanded for clarification on who is the chief executive of a company to take charge of an industrial accident, and also on the specific duties for the management,” KEF said in a statement.

“To raise the effectiveness of the law for accident prevention, and to reduce the side effects of excessive punishment, the law should be revised.”

The Korea Chamber of Commerce and Industry also expressed regret for the enactment being finalized without fully addressing the concerns of companies.

“The enactment decree only broadly stipulates the safety and health duties, and companies experiencing confusions,” KCCI said in the statement, and urged the government to provide a detailed guideline.

The passage of the workplace disaster law also fell short of expectations from workers.

The Federation of Korean Trade Unions expressed dissatisfaction, saying that most of its recommendations were not taken into account. It also pointed to how the new enactment decree excluded brain and cardiovascular-related diseases as possible occupational diseases.