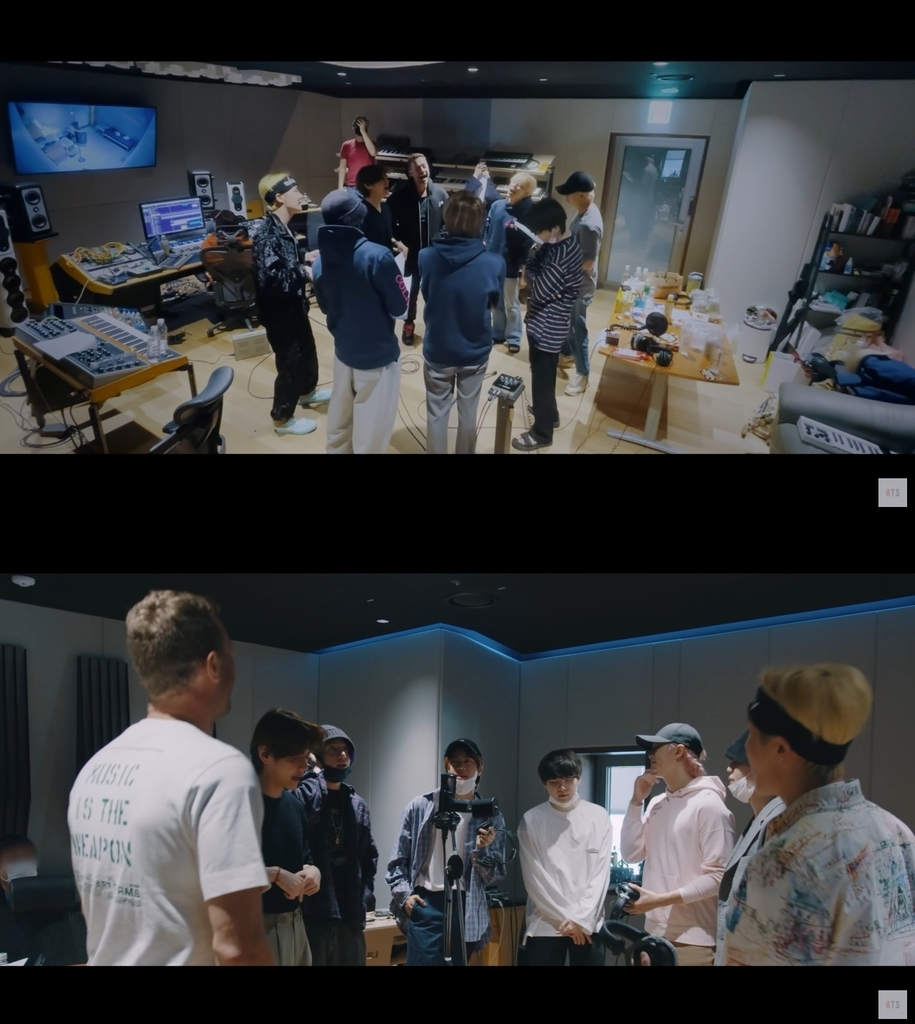 The 13-minute video was posted on BTS' YouTube channel Sunday, two days after the song dropped amid high anticipation from fans worldwide.

The documentary opens with Coldplay frontman Chris Martin relaying a story about how the high-profile collaboration began."About 18 months ago, I got a message from somebody. They said, 'BTS want to do a song with you' and I said, 'How would that work?' I didn't understand how that could be possible," Martin says in the video.

The Coldplay vocalist flew to Seoul in April despite the restrictions posed by the COVID-19 pandemic.

"It's been very difficult to get here to Korea," Martin said. "We've been very lucky with people allowing us to come in for two days just to record. And it was quite a stressful journey, and I was a little bit nervous. I've never met BTS before."

From what is shown in the documentary, Martin and BTS' seven members hit it off as soon as they met.

Martin entered a room carrying gift-wrapped boxes, and the South Korean superstars jumped up from their seats, greeting him with howls and hugs.

"He was once my role model," BTS member V said in the video. "He really had an enormous influence on me."

Jin recalled his amazement. "Someone I considered a celebrity wanted to work with us, and I was like, 'Oh! What do we do?'"

Both Martin and BTS dressed casually and looked comfortable as they practiced their parts in recording booths and came together to harmonize on the chorus.

"That was perfect!" Martin cried after V sings his part in Korean.

"My Universe," which was co-written by the two acts and produced by hitmaker Max Martin, will be included on Coldplay's ninth album "Music of the Spheres," to be released Oct. 15.

"This song is about how the power of love transcends all things -- orders and rules and genders and race and sexuality," Martin says. "If you look at people right now who are divided by a border or can't be together, that's what the song is about. About how nothing can really stop people loving each other."

"When we say, 'You are my universe,' the target clearly has to be ARMY," he said, referring to the K-pop act's fan base. "We imagined the day we will eventually meet with ARMY as we wrote it."

J-Hope said he appreciated Martin for traveling to South Korea when they could have worked together remotely.

And Martin was full of praise for BTS.

"It's very special to me that the most popular artist in the world speaks Korean and is like a group of brothers not from the West," the 44-year-old said. "It feels very hopeful to me in terms of thinking of the world as one family. Then of course, when you see who they are as people and their songs, then it's really a message of togetherness and being yourself, all the stuff I agree with."

Describing the day as "one of the most fun days for me in the studio, ever," he added, "Today has just been like everything I could have dreamed, but a little bit better."

"It's like a dream coming true," Martin said, "because I saw it in my head for so many months and now here we are." (Yonhap)