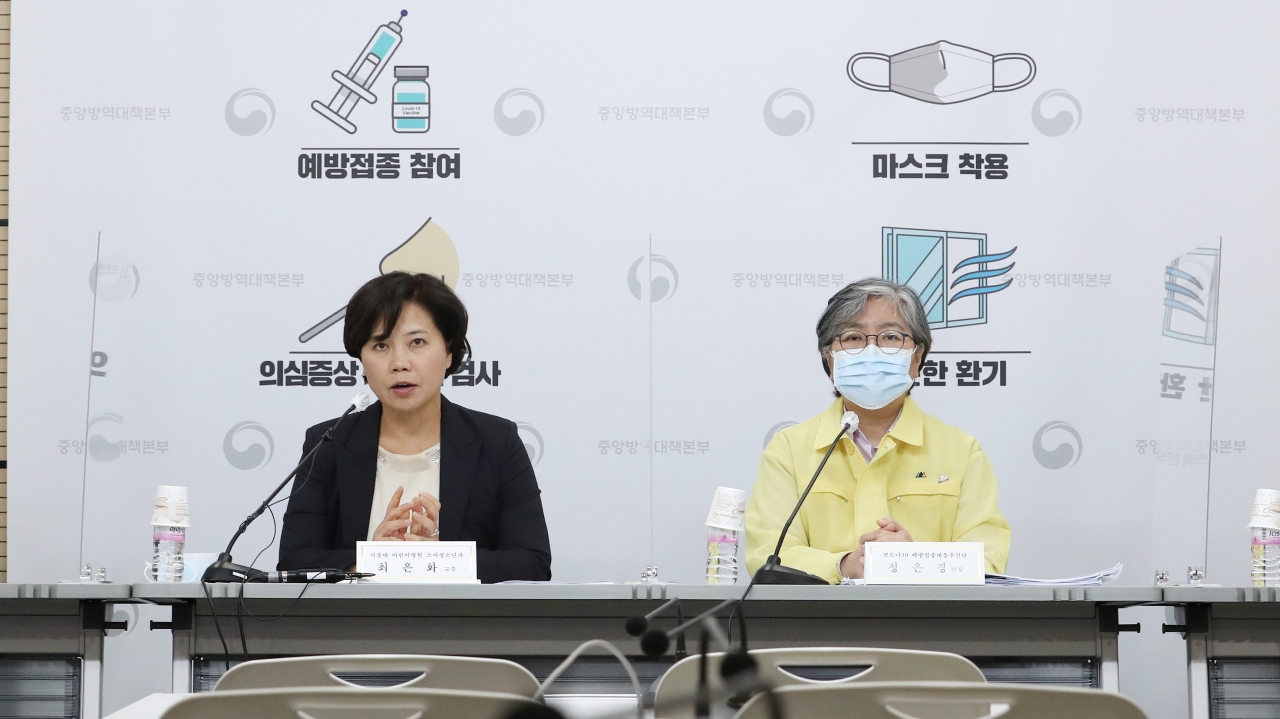 The head of the national advisory committee on immunization practices Dr. Choi Eun-hwa (left) speaks during Monday's news briefing. She removed her mask briefly while she spoke. On the right is Jeong Eun-kyeong, the Korea Disease Control and Prevention Agency's Commissioner. (Yonhap)
Korea said Monday that it would only “strongly recommend” COVID-19 vaccinations for children and teenagers if they are medically vulnerable, as it plans to roll out vaccinations for under-18s in late October.

In a news briefing, the Korea Disease Control and Prevention Agency’s chief Jeong Eun-kyeong said with regards to vaccination of children and adolescents, “an informed and voluntary decision is recommended.”

But children with underlying health issues -- including obesity, diabetes, chronic conditions of the kidney or lungs, neurological conditions or other immunocompromising conditions -- are “strongly recommended to take the vaccines,” she said.

COVID-19 vaccination is not mandatory for anyone in Korea, but the advice for adults has been more definitive. The KDCA says all adults aged 18 and older are “strongly urged” to get vaccinated.

Speaking at the same briefing, Dr. Choi Eun-hwa, a pediatric infectious disease specialist heading Korea’s national advisory committee on immunization practices, said, “Children and adolescents are not as at risk of severe illness or death from COVID-19, but on rare occasions, they can come down with some worrisome complications.”

The harms of getting COVID-19 were not strictly physical, she explained. For children, isolation following diagnosis may be a traumatizing experience.

Social distancing and other nonpharmaceutical interventions may also lead to psychological distress.

“That being said, we have to consider the safety problems like heart inflammation following COVID-19 vaccination, which are very rare but could turn out to be serious,” she said. “So it’s paramount that guardians and parents make informed decisions after understanding both the risks and benefits.”

Responding to press queries, she said that “for children who are not clinically vulnerable, benefits of COVID-19 vaccine do not far outweigh the potential risks.”

“But if parents wish to get their children vaccinated, or children themselves wish to get vaccinated, they will have the option to do so based on information that is provided to them starting next month, most preferably after consulting a pediatrician.”

Choi went on, “I would like to stress that the decision of whether to get the vaccine or not should be respected either way. There should be no stigmatizing or shaming whichever way one decides.”

The age group between 12 and 17 comprises some 2.7 million, who will be able to receive vaccinations from mid-October onward. Legal guardians or parents must consent for eligible children and teens to be vaccinated.

So far in Korea, most children with COVID-19 have had mild cases, and all made full recoveries, according to official statistics.

Patients aged 10 to 19 make up roughly 8 percent of more than 300,000 identified cases of COVID-19 here, which translates to an incidence rate of about 460 cases per 100,000 people. Out of those cases, three developed severe symptoms, all of whom had preexisting health issues such as obesity. No one under 20 has died.

There have been six known cases of a pediatric complication linked to COVID-19 called multisystem inflammatory syndrome in children, or MIS-C, which is an immune response marked by inflammation throughout the body. Four of them had to undergo intensive care.

The KDCA’s Aug. 12 preliminary report on vaccinations in older teens said the surveyed adverse events “did not deviate from those described with adults” and “none involved events that were not previously reported globally.”

Although Korea so far has offered vaccinations only to adults 18 and older in descending order of age, priority was given to high school seniors taking college admissions exams.

Since their eligibility opened in July, 443,686 17- and 18-year-olds have received Pfizer’s vaccine, of whom 1,139, or 0.26 percent, reported experiencing adverse events, according to the report. Most -- 1,109 -- were classified as minor, while 30 were “adverse events of special interest” including myopericarditis, acute paralysis, encephalitis or thrombocytopenia.

Myocarditis and pericarditis, inflammatory conditions of the heart associated with Pfizer and Moderna vaccines using mRNA technology, were confirmed in five boys and one girl, the report said. Four of them developed symptoms such as chest pain and breathlessness after their first dose, and two after their seconds. All four that required intensive care admissions were boys.

The only vaccine available to children is the one from Pfizer, which is to be given three weeks apart per the standard protocol, as opposed to six weeks here for adults, the KDCA said.

The KDCA also said its advisory committee on immunization practices had advised that minors aged 12 and older be included in COVID-19 vaccine program, but only after the rollout in adults is complete.

Over the next month, Korea’s vaccination efforts are mostly set to focus on distributing second doses to adults who had their first doses between August and September. The goal is to fully vaccinate at least 80 percent of the adult population before the end of October.

Also being newly added to the program are pregnant women, who can expect their first doses of either Pfizer or Moderna vaccines sometime next month. Older people aged 60 and up as well as front-line health care workers working with COVID-19 patients will be provided third booster doses in the fourth quarter as well.

For those getting vaccinated in November, the interval between two Pfizer and Moderna doses could be shortened from the current six weeks to four or five weeks, depending on availability, the KDCA added.

Since the vaccine program kicked off on Feb. 26, some 74 percent of 51 million people in Korea have been vaccinated with at least one dose of a vaccine, while 45 percent have been fully vaccinated.