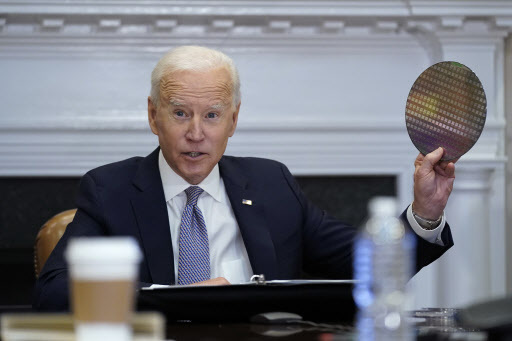 US President Joe Biden speaks during a virtual meeting with chip industry leaders on April 12. (Yonhap)
The US government’s strategic interest in chips is putting South Korean chipmakers in a quandary, as Washington adds pressure on chipmakers to share sensitive data on technology, clients and inventory status.

With a stated purpose of solving the chip shortage, which is affecting automotive and other industries around the world, US authorities on Thursday held an online meeting with major automakers and chipmakers, which Samsung Electronics attended.

Following the meeting, the US Department of Commerce posted a list of questions on the Federal Register homepage, asking companies to answer them by Nov. 8.

The problem is the questionnaire touches on sensitive business information, including types of technology nodes, semiconductor materials and devices. It also asks the firms to reveal order backlogs, their top three current customers, the estimated percentage shares of each customer and other details of their inventory status

“This is unprecedented,” said an official at a Korean chipmaker.

“The information the US government is asking for is what companies keep confidential as trade secrets,” commented a senior official at another chip firm. “There is no company that reveals their backlogs or customer list.”

Of the two major Korean chipmakers, Samsung appears to be in a more difficult situation as the company is close to finalizing a $17 billion plan for a new foundry plant in the US, highly likely to be in Taylor, Texas. The world’s No. 1 producer of memory chips was the only Korean participant of Thursday’s meeting.

However, SK hynix, in the long run, would also be subject to the US executive order, since it is defined to be applied to all semiconductor providers that supply chips for any devices or equipment bound for the US.

Yet, the US program still looks unclear to many in the industry.

The semiconductor meeting was originally held to “understand and quantify bottlenecks that may exist” in the supply chains for the US automobile industry that is suffering the ongoing chip shortage.

“It is unclear whether the US order would be applied to general-use memory products as well, or auto chips in particular,” an industry insider said.

It was the second meeting held by the Biden administration on the current chip shortage problem, which called in Korea’s top chipmaker Samsung.

In April, the Commerce Department held its first meeting with chipmakers and automakers, in which President Joe Biden appeared briefly with a wafer as a sign of pressure.

Under the Biden administration, the US is moving to reclaim its leadership in the global chip industry, which it ceded to Asian players like Samsung and TSMC in the last 20 years.

Intel has declared it is restarting its foundry business with the backing of massive tax incentives and policy support from the Biden administration.

Seoul-based industry officials expressed concerns that such a US government move would only benefit Intel.

“The questionnaire requires chip manufacturers like Samsung and TSMC to reveal not only current technologies, but also their production yields that are key to price negotiations in the market,” said a company official. “We can’t rule out that the information could be leaked to US firms including Intel.”