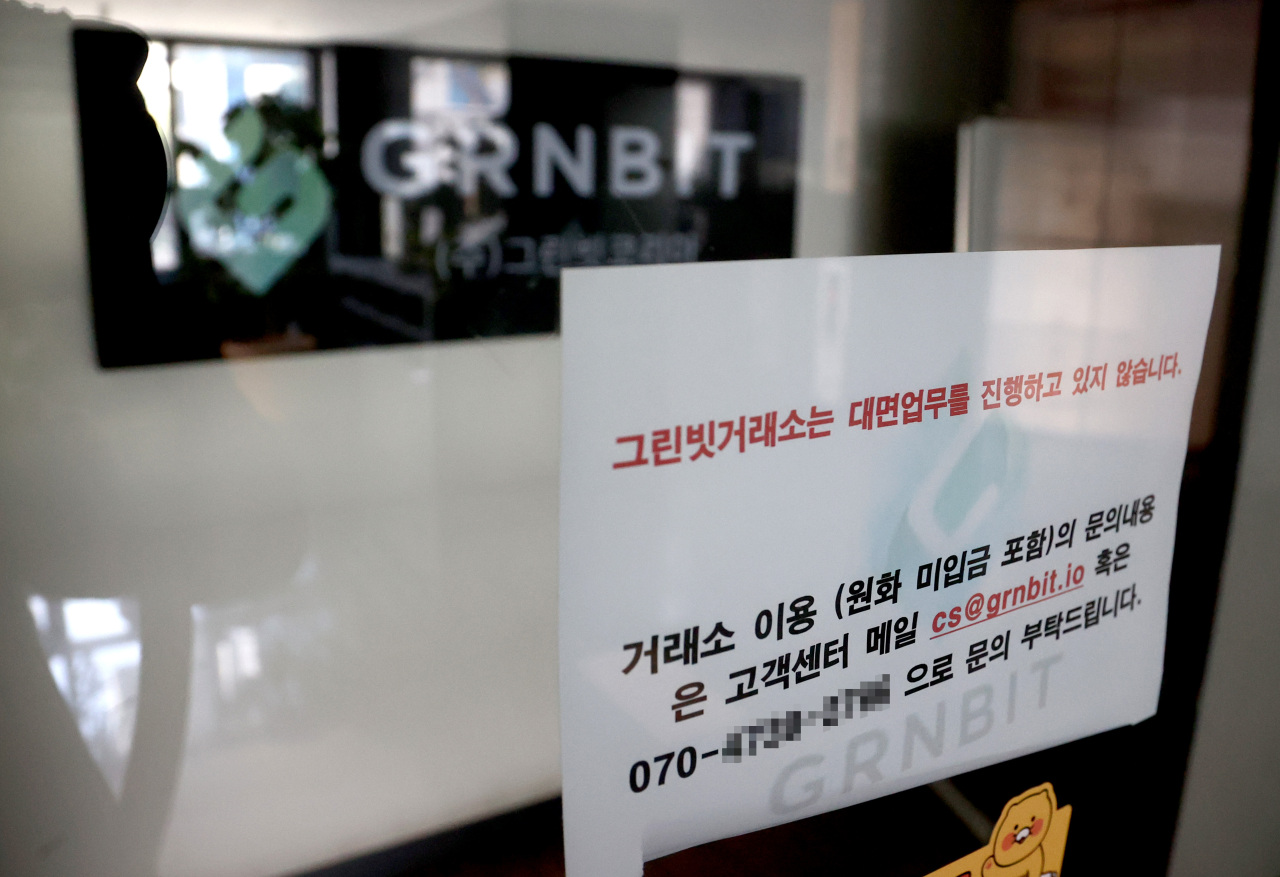 A sign is posted on the door of a closed cryptocurrency exchange on Friday. (Yonhap)
Twenty-nine of Korea’s 66 cryptocurrency exchanges met a legal deadline to put themselves under regulatory supervision, but they still face challenges, market insiders said Sunday, such as risks from legal breaches and an inability to convert coins into Korean won.

The Financial Services Commission said Saturday that 29 exchanges submitted applications to register their businesses by Friday and will process them within three months, legitimizing their status as market players but also subjecting them to regulatory monitoring and supervision.

The registration brings them out of local legal blind spots, but the exchanges now have to abide by global rules on anti-money laundering and other measures and could face closure for failures of compliance.

And of the 29 exchanges that met the deadline, only four of them -- Upbit, Bithumb, Coinone and Korbit -- were able to secure real-name accounts in partnership with local banks, a requirement for allowing traders to buy and sell cryptocurrencies in exchange for Korean won.

Gopax, Huobi Korea and Gdac tried to reach a deal from banks but to no avail, and will have to halt their Korean-won trading services.

The 29 exchanges are obliged to set up a system to adopt global anti-money laundering standards called the “travel rule.”

The travel rule is a global standard imposed by the Financial Action Task Force, an intergovernmental anti-money laundering watchdog, on virtual asset service providers such as cryptocurrency exchanges and digital wallet providers. The country’s virtual asset service providers are required to establish the travel rule system, which requires real-name verification of senders’ identities for international transfers, by March 25 next year.

Three exchanges -- Bithumb, Coinone, and Korbit -- launched a joint venture to develop a travel rule system together, while Upbit, the largest exchange in South Korea, announced its own system developed by its subsidiary.

The Act on Reporting and Using Specified Financial Transaction Information requires crypto exchanges to be equipped with ISMS and to form partnerships with banks by Friday.

After the Friday deadline, 37 exchanges without the required qualifications face closure as their businesses became illegal by the new law. They face a fine of up to 50 million won ($42,365) or up to five years of jail time. The shutdown of the 37 exchanges, however, is expected to make just a minor impact to the market, as their trading volume account for less than 0.1 percent of the total transactions made here. Their hold of investors‘ money is estimated to not exceed 500 million won.

The industry is also paying keen attention to ongoing discussions on legislation regarding the virtual asset industry as a whole at the National Assembly. There are 13 proposed bills in Parliament that could possibly set the foundation for the industry.

In legislation proposed by the opposition People Power Party, the requirement for real-name accounts would be removed while another bill proposed by the ruling Democratic Party and Justice Party stipulates an exchange has to gain approval from the government, strengthening the current registration system.

“It is meaningful that many unqualified exchanges are sorted out during the registration process,“ an official at a cryptocurrency exchange said. ”But it is also true that real-name accounts became an entry barrier, even for blockchain startups that have great potential.”