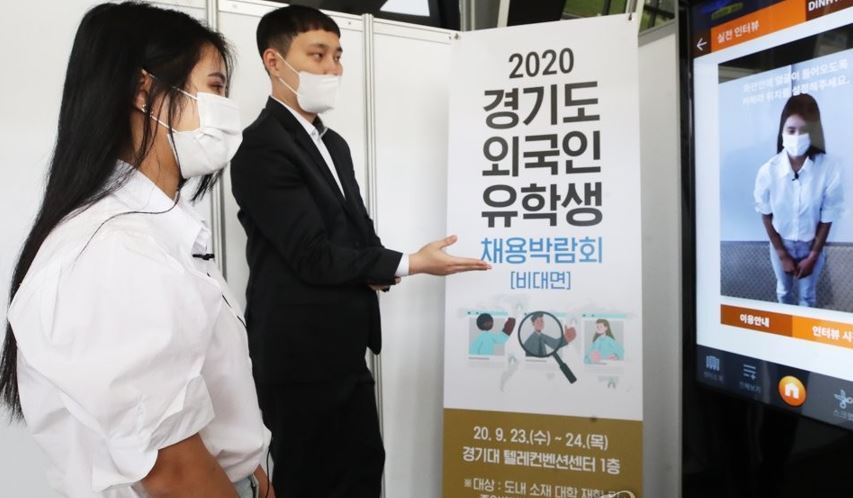 A foreigner is interviewed online during a job fair in Suwon, Gyeonggi Province, in September 2020. (Yonhap)
SEJONG -- The number of foreigners in South Korea climbed last month, in the first monthly increase since COVID-19 hit the nation in early 2020, immigration data showed.

According to the Korea Immigration Service, the tally for foreign nationals -- both long-term and short-term visitors -- reached 1.976 million as of August, up 2,858 from a month earlier.

This is the first time in 20 months that the tally has grown on-month. After peaking at 2.52 million in December 2019, the figure has declined. 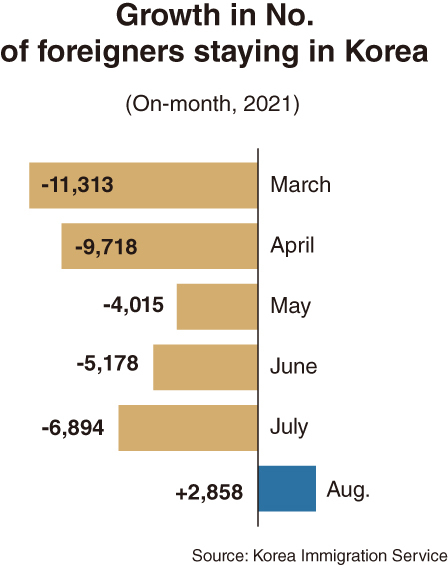 (Graphic by Kim Sun-young/The Korea Herald)
The rebound in August, though the extent was meager, was somewhat attributed to a surge in the number of inbound visitors to study in universities or international schools, while the figure for inbound tourists remained in the doldrums.

KIS data showed that the number of visitors for study increased more than 800 percent from 1,753 in July to 17,319 in August. Those included foreign students, who returned to Korea for new semesters after residing in their homelands for several weeks or months.

In contrast, the tally for foreign nationals for sightseeing or other short-term stay with B-2 visa decreased by 16 percent from 11,820 to 9,908.

Despite the bounce-back, the number of foreigners staying in the nation as of last month still stayed at the level of mid-2016.

On a yearly basis (each December), the number of foreigners here broke through the 1 million-mark for the first time in 2007, rising every year until 2020

The sharper drop among those for short-term stay could be attributable to a marked fall in the number of inbound travelers for sightseeing or business amid the pandemic.

Chinese still made up the greatest portion of the total, with 851,615 Chinese nationals in Korea as of August, though the figure slid by 22.7 percent from 1.1 million in December 2019. Ethnic Koreans from China, or Chinese citizens of Korean descent, made up more than 73 percent (621,733) of the 851,615 Chinese here.

The tally for Vietnamese and Thais trailed after, accounting for 209,839 and 174,052 people, respectively. US nationals made up the fourth-biggest group with 145,724, including about 28,500 US military troops stationed here.

The number of Japanese visitors showed a noteworthy decrease over the corresponding 20-month period.