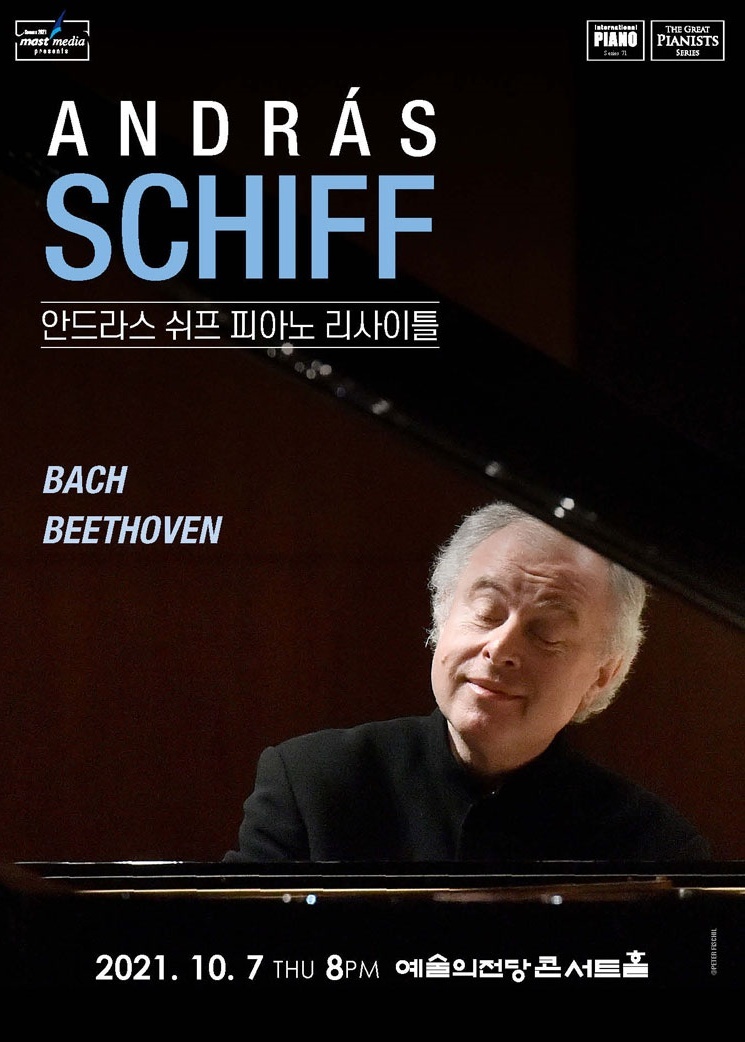 Poster image for Andras Schiff‘s solo recital at the Seoul Arts Center (Mast Media)
With the local performing art scene preparing for the new normal amid the COVID-19 pandemic, pianist Andras Schiff is to go onstage in Korea with a series of performances, from solo concerts to a four hands piano recital.

Classical pianist Schiff who has received numerous awards, including Grammy and Grammophon awards, the Bartok Prize and the Royal Academy of Music Bach Prize, is to hold multiple performances in Korea in October.

Schiff will hold a solo recital at the Seoul Arts Center in southern Seoul on Oct. 7, performing Bach’s Chromatic Fantasy and Fugue in D minor BWV 903 and Capriccio in B flat major BWV 992, Beethoven’s Sonata No. 17 in D minor, Op. 31 “The Tempest,” Sonata No. 26 in E flat major Op. 81a “Les Adieux” and more.

The Hungarian-born pianist is widely recognized for his interpretation of Bach and Beethoven. Schiff is considered a Bach specialist, his recording of the Goldberg Variations in 2003 gained critical acclaim.

Since his late 40s, Schiff has been focusing on Beethoven. He completed the recording of Beethoven’s 32 piano sonatas in 2009. He is a member of Beethoven-Haus in Bonn, Germany.

After the Seoul recital, Schiff will hold another solo recital in Daegu on Oct. 9 with the same program.

Kim, the winner of the 2006 Leeds International Piano Competition, is a celebrated concert pianist in and out of Korea. Earlier this year, he went onstage with the Berlin Philharmonic, performing Chin Un-suk’s piano concerto. He has also been conducting, taking the baton for the KBS Symphony Orchestra.

The program for the recital -- which will be released on the day of the recital -- is to include the works of Mozart and Schubert. The two pianists will take to the stage at the Seoul Arts Center as part of the same program on Oct. 14.