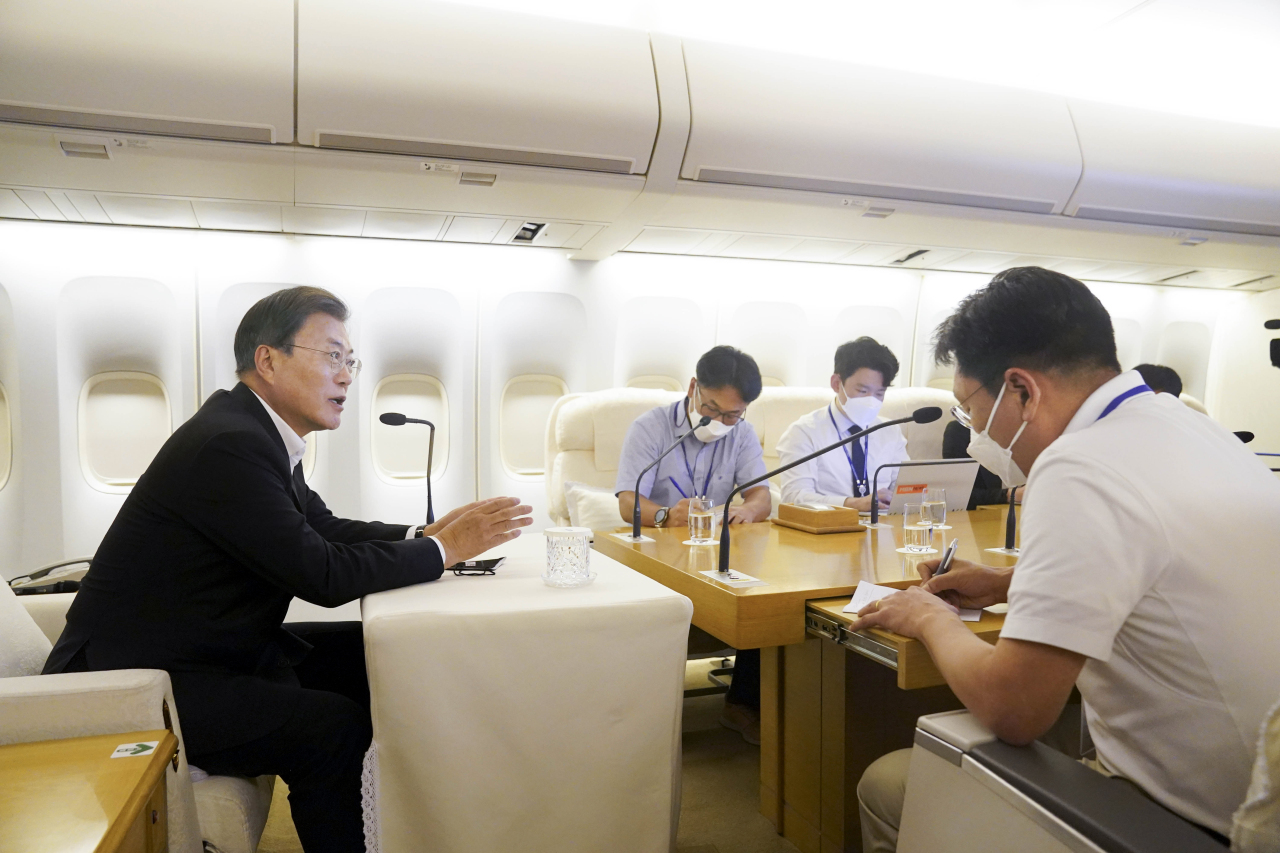 In his fifth and final keynote speech as president at the UN General Assembly, he reiterated his push for the declaration of a formal end to the 1950-53 Korean War that ended in an armistice, not in a peace treaty.

“I think there is a lack of understanding about an end-of-war declaration. It’s not a peace treaty but the starting point to discuss the peace treaty,” he said of the non-binding and political nature of the war-ending declaration.

He said he had expectations about making a breakthrough in the stalled inter-Korean relations during the UN gathering as this year marks the 30th anniversary of both Koreas becoming UN members. “But it didn’t work as intended,” he said.

Despite North Korea’s recent missile tests, he stressed the reclusive regime will return to the negotiating table with the US in the end, saying it still maintains its self-moratorium on nuclear testing and intercontinental ballistic missile launches, leaving the door open for dialogue.

“North Korea will return to dialogue in the end but it remains to be seen whether that could happen during my presidency or in the next government,” he said. His five-year single term ends in May next year.


The full transcript of the Q&A session is below:

Q: What is your impression of this US trip?

Moon: Because this year is the 30th anniversary of South and North Korea becoming UN members, I had expectations that the UN General Assembly could be an opportunity to make a breakthrough in inter-Korean relations. But that didn’t work as intended.

But it was rewarding that I and BTS together attended the Sustainable Development Goals event as the guests of honor and helped extending interest and understanding about the SDG vision across generations.


Q: You finished the trip by paying tribute to war veterans.

Moon: Repatriating the remains of war veterans was the key purpose of the Hawaii visit. It is a nation’s duty to find the remains of people who have devoted themselves to the country and return them to their families. The government has continued related efforts and there have been some achievements but we still have a long way to go. We will do our best for their repatriation until the end.

It was also a rewarding event to award medals of honor to two Korean immigrants (to the US) for their independence activities during Japan’s colonial rule.


Q: In your UN speech, you suggested declaring a formal end to the Korean War. Were there any communications with the US, China and North Korea in advance?

Moon: After checking media coverage, especially the response of opposition parties, I thought there is a lack of understanding about an end-of-war declaration. Actually, the two Koreas had already agreed on the war-ending declaration by three or four parties through the Oct. 4 Joint Declaration signed in 2007. The three parties were the two Koreas and the US, and China could join if it wanted. Since then, I think there has been a consensus among the nations that the end-of-war declaration is necessary.


Q: It’s your third suggestion but no progress has been done so far. Do you think other nations are passive about the issue?

Moon: No, they are not. The overall process was relatively simple in the past, but now things have become more complicated, with North Korea advancing its nuclear capabilities. We need a two-track approach: While working on peace treaty talks, there should be separate talks for denuclearization, under which sanctions relief will be carried out in phases and the US takes corresponding measures.

That’s why we need a more strategic consideration on when and how an end-of-war declaration can be made. I think there is a clear consensus among the nations on the issue and it is an issue that can be discussed when inter-Korean and US-North talks start.


Q: COVID-19 is also a factor in the inter-Korean talks.

Moon: Yes. North Korea’s nuclear weapons and long-range missiles may be the biggest hurdles in the development of inter-Korean relations but for now the key issue is North Korea’s border shutdown due to COVID-19. But we cannot spend time doing nothing because stalled talks could lead to new tensions. It’s time to talk. The US also shows a strong will. They hint at a more gradual and practical approach to dealing with the North Korea issue, urging the regime to resume talks.


Q: The inter-Korean hotlines have been cut off again. Were there any exchanges or contacts between the two Koreas?

Moon: Both South Korea and the US have sent overtures for dialogue but there is no response from North Korea. But I wouldn’t say the door between the two Koreas is closed. Even though North Korea recently fired missiles, they maintain a self-moratorium on nuclear testing and intercontinental ballistic missile launches. They are escalating tensions with low intensity acts, which are not serious enough to make the US abandon dialogue. North Korea appears to be making many considerations, keeping the door open for dialogue.

North Korea is urging the US to scrap its hostile policy and to compensate them in return for denuclearization. They are saying they can return to the negotiating table once their conditions are met. In the meantime, the US is saying these conditions can be discussed once talks are resumed. I cannot predict but I believe North Korea will conclude that taking the path of dialogue and diplomacy would be in its interests. Still, it remains to be seen whether the time will come within my term or later in the next government.


Q: Do you expect an inter-Korean summit before your presidency ends? How about at next year’s Beijing Olympics?

Moon: We will do our best until the end if there’s any hope of advancement in inter-Korean relations. I’m not so sure about summit talks. I think the Beijing Olympics could become one of the occasions for rapprochement.


Q: In your UN speech, you said you expected that the international community remains ready and willing to reach out to North Korea. Did you mean possible sanctions relief?

Moon: The key achievement of the three inter-Korean summits and two North Korea-US summits was inducing North Korea to the international community. It’s regrettable that the process has been suspended after the breakdown of the Hanoi summit (between then President Donald Trump and North Korean leader Kim Jong-un in February 2019).

There are restrictions because North Korea has not yet abandoned its nuclear weapons program and UN sanctions remain intact. But it is an international consensus that humanitarian cooperation should continue. I think the international community should pay more attention to humanitarian aid that helps its people, not the regime.


Q: I was surprised to see maskless people in New York. What’s the ‘With Corona’ plan for Korea?

Moon: I think what’s important is not my plan but opinion of experts. We have not yet reached our vaccination target, with the number of people vaccinated with first shots exceeded the 70 percent mark. I think the vaccination rate could reach 70 percent by the end of next month. Then we can consider ‘With Corona.” But countries with higher vaccination rates also struggle to deal with a surge in infections. So ‘With Corona’ doesn’t mean easing all the quarantine measures. On this issue, experts will start discussions soon and we could share the results with the public possibly next month.


Q: Do we have enough vaccines now?

Moon: There were advancements in the two key directions. As part of our global vaccine production hub vision, we had achievements in meetings with Pfizer CEO and other vaccine developers. We also signed vaccine swap deals with the UK and Vietnam, through which we would play a role in improving the accessibility of vaccines for countries struggling with vaccine shortages.

Securing more vaccines is not an issue anymore. We had some issues with delayed shipments but those issues have been resolved. Sometime next month, we will become one of the most advanced countries in terms of vaccination rate. As you can see in our swap deal with Vietnam, we now have enough vaccines to help other countries. We tried to secure more vaccines in case of emergencies and some extra vaccines can be used for donation. There should be no concerns for domestic consumption.


Q: What’s your opinion about the media law revision?

Moon: Cheong Wa Dae is not leading the revision. There was a rough consensus between the ruling party and the government that countermeasures should be come up to prevent national or individual damages from false or fabricated news and then the Democratic Party led the revision. I think concerns raised by the media, civic groups and the international community should be fully reviewed.


Q: In the UN speech, you said you would make ceaseless efforts until your very last day in office.

Moon: It’s the fate of my administration. Due to COVID-19, our government will be a risk-management government until the end. There will be no easing even in the last days of my term or ahead of the next presidential election.