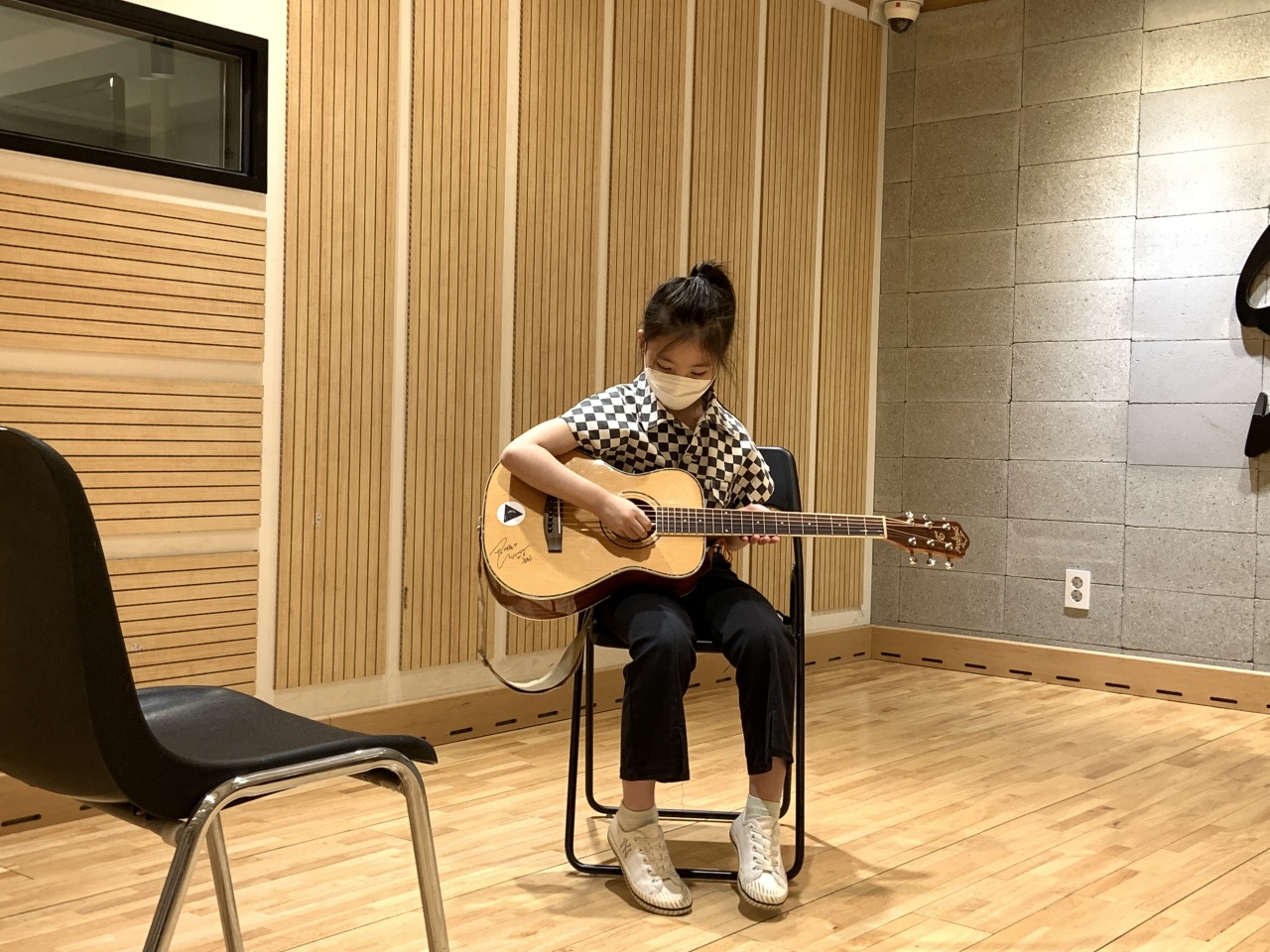 But the number of private academies that offer dance and vocal lessons has mushroomed as more youngsters aspire to K-pop stardom.

Lee Jae-won has run a dance academy in Apgujeong-dong, southern Seoul, for eight years, training young idol-wannabes. Lee’s institution systematically instructs trainees with the goal of eventually getting them into big agencies so they can debut as entertainers.

“There are many academies that welcome adults and teenagers, and some even offer classes that focus on auditions, but there are barely any institutes that teach basic skills to young kids,” he said.

The institute offers dance courses at the introductory, intermediate and advanced levels. Beginners learn the basics, such as how to use their bodies and do easy dance moves to K-pop music. At the next level they learn more complicated choreography and try out genres like hip-hop and popping.

In South Korea, the average age of a debuting singer is getting younger, and some K-pop powerhouses set age limits for auditions. Lee said this is why he provides thorough training -- because idol hopefuls cannot survive the big agencies’ wide trainee pools without the basics. 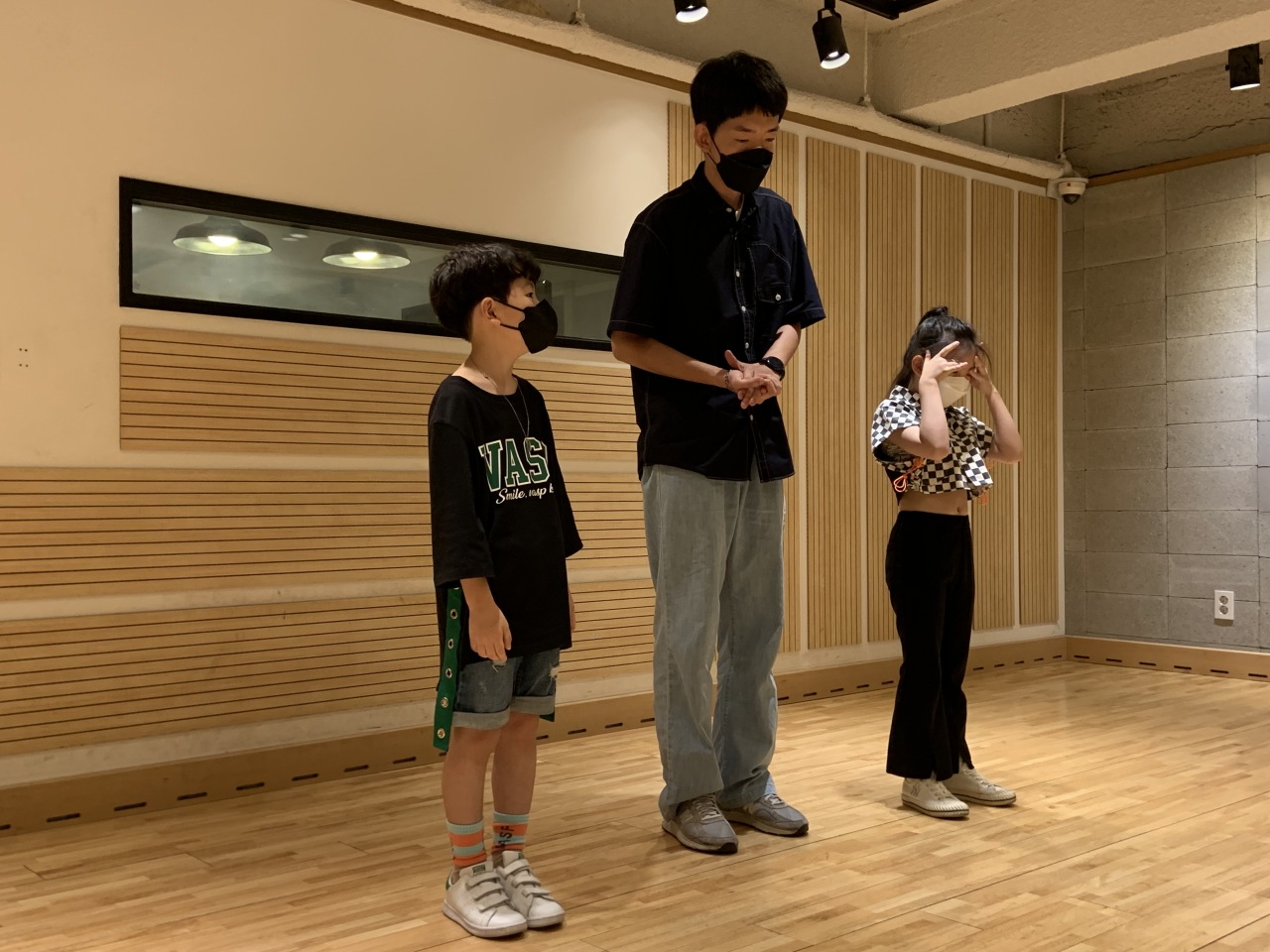 Lee Yu-chan (left), 9, and Woo Seo-yul, 8, get vocal training. (Park Jun-hee/The Korea Herald)
Lee offers separate classes for boys and girls because male and female trainees need to learn different dance styles. The academy also organizes lessons based on age -- there are classes for grades one to three, grades three to six and middle schoolers, as abilities vary.

While talking about trainees from the academy who got into big-name agencies, Lee fondly recalled one excellent student who is now with Big Hit.

“(The kid) had numerous charms and had many talents tailored to him. But his parents didn’t want to see their son onstage. Fortunately, he got into Big Hit two years ago as one of the youngest trainees and aces every end-of-the-month evaluation.”

Lee added that apart from gaining the necessary skills, idol hopefuls should know how to be modest and diligent because becoming an A-lister in the music scene isn’t a walk in the park.


Wishing to be the next K-pop sensation

“I am a versatile idol-wannabe with a pretty face.”

Woo Seo-yul dreams of becoming the next IU, a K-pop superstar. The 8-year-old, who lives in the southwestern Seoul district of Geumcheon, wakes up at 7:30 a.m. for school, attends her elementary school classes from 9 a.m. until 1 p.m. and then heads out the door for practice.

This scene is peculiar in a nation where academic subjects decide one’s future. But now the name of the game is working to become the next global sensation. 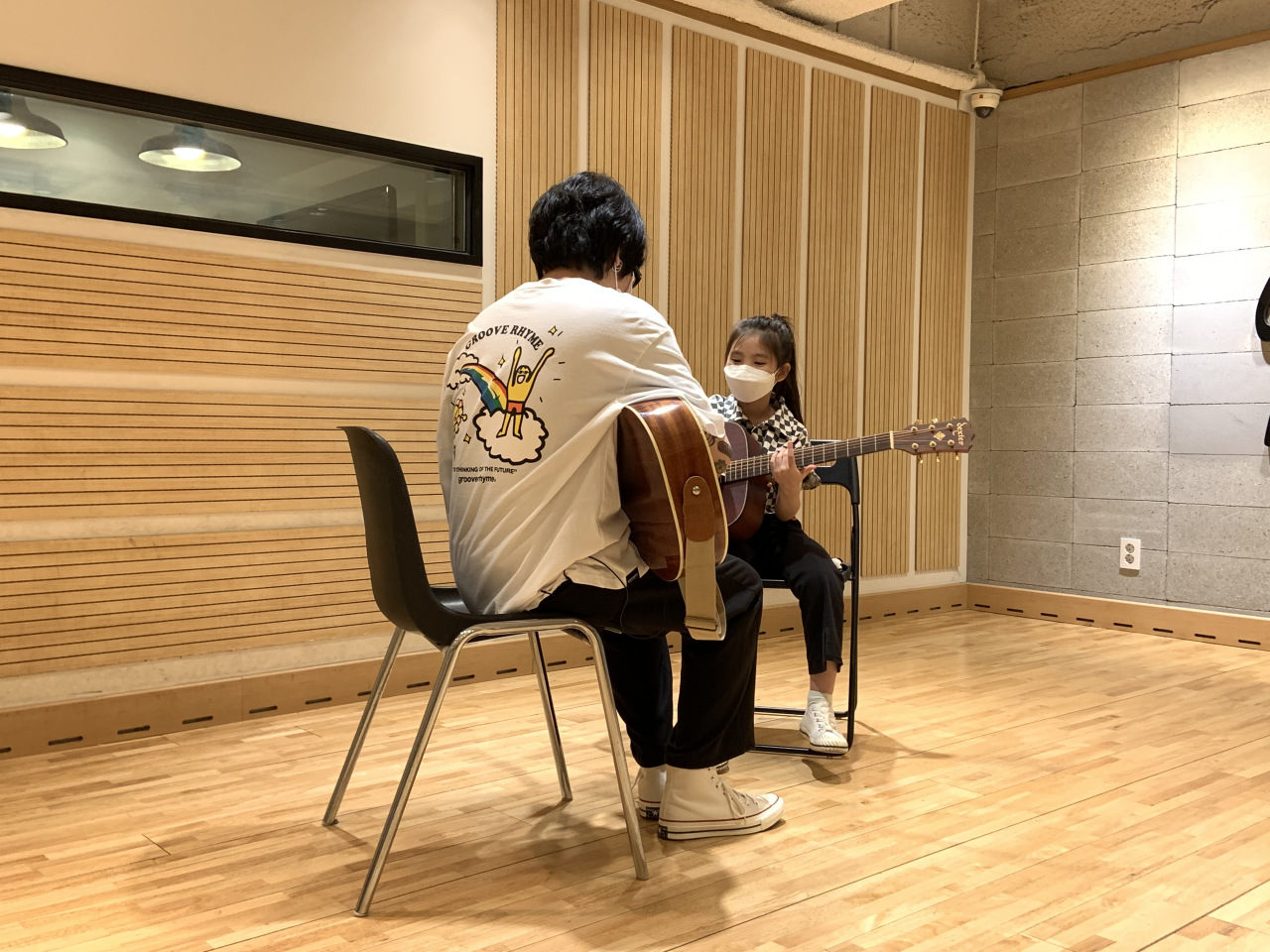 Idol-wannabe Woo Seo-yul gets a guitar lesson. (Park Jun-hee/The Korea Herald)
“The industry has been flooding with audition programs that have been aired on the nation’s network channels and other streaming platforms,” said pop culture critic Kim Hern-sik. He added that K-pop gurus such as Park Jin-young of JYP Entertainment and Lee Soo-man of S.M. Entertainment appear on the show and engage in the scouting process in some cases as well.

He went on to say that in addition to their talent and skills, idol bands are revered because of their wealth and privilege, which is why idol-wannabes hope to be the talk of the town like BTS.

Lee Sun-kyoung, Seo-yul’s mother, said she never pictured herself as the parent of an idol hopeful. But now she drives more than an hour to drop her daughter off at a kids’ dance academy in the Gangnam district twice a week.

“It’s heartbreaking seeing my daughter want to become an idol because everybody wants to be one. My daughter only sings and dances, apart from going to school,” Lee said. She added that the tuition was a burden as well.

But Lee thinks her daughter’s efforts will eventually pay off.

“I’m aware that the road to a debut is not easy, which is why I’m constantly supporting my daughter. But even if she doesn’t become one, hopefully my daughter will be able to showcase her talent as a dancer or a dance teacher.”


Big dreams, out of reach

Led by boy band BTS’ meteoric rise to stardom over the past few years, more and more K-pop figures have gained immense popularity around the globe among people of all ages.

But that kind of fame is hard to attain. Lesser-known musical artists often confront difficulties in the music scene. 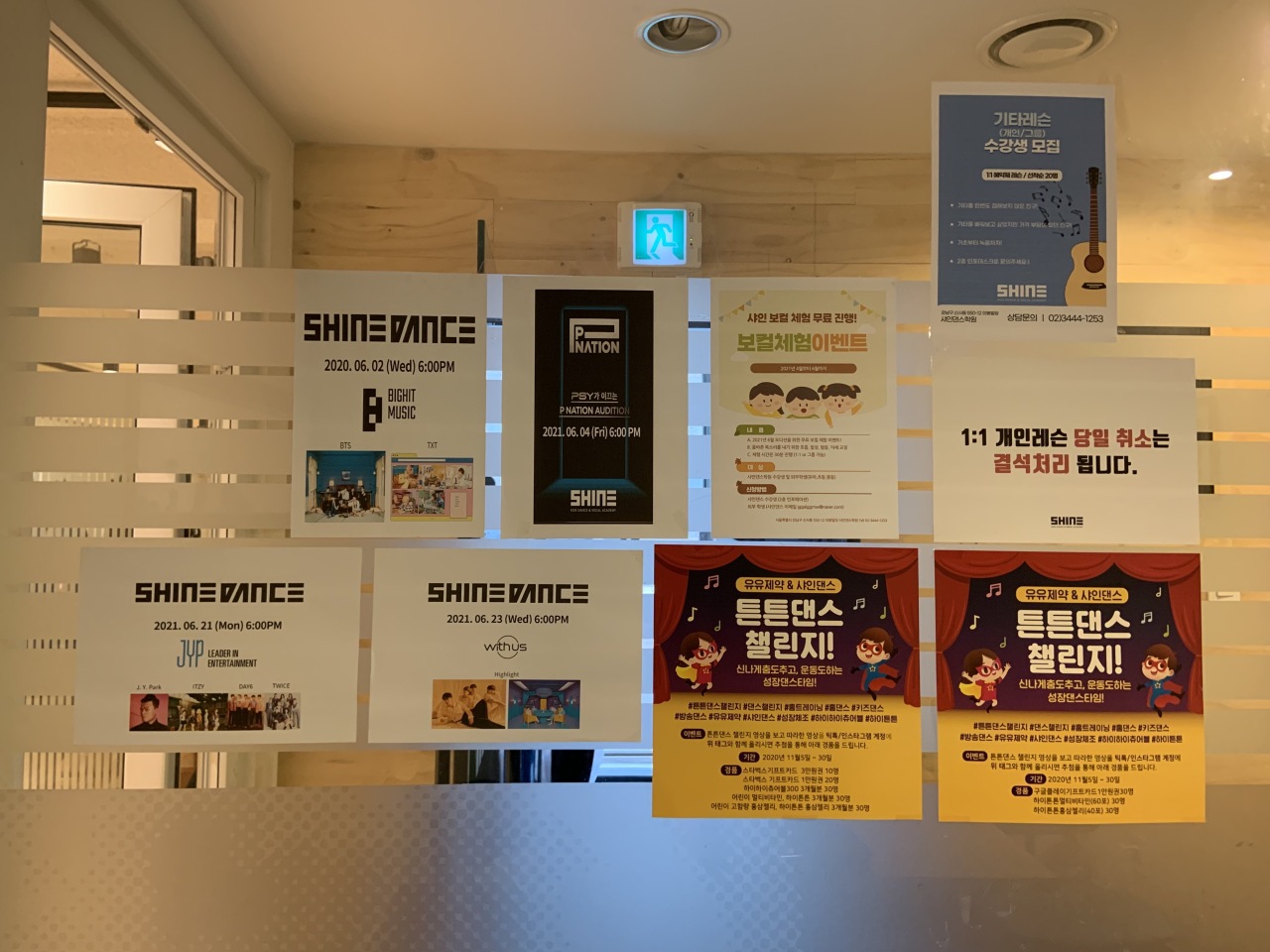 Audition dates for Korean entertainment companies are displayed on posters. (Park Jun-hee/The Korea Herald)
One 27-year-old woman, surnamed Park, was always a would-be K-pop idol in her mind’s eye. As a child in the US, she was always fascinated with K-pop, although she never thought she would pursue it as a profession. But at the end of her senior year of high school, she hopped on a plane to Korea after passing an audition for the second season of the survival television program “K-Pop Star,” which aired on terrestrial network SBS in November 2012.

After attending 10 auditions in Korea, she got accepted to an agency and finally made her debut. But the experience ultimately ended in disappointment.

“Being in a smaller company has more cons than pros. From the way how staff members of high-ranked broadcasting people treat you, and how you don’t get preferential treatment, unlike other bands who entertainment giants house,” Park said.

“The bigger your company, the better you get treated.”

Favoritism toward big companies affects which shows performers get booked on, she said, as well as screen time, waiting rooms and whether they can make a living.

“Companies invest in trainees, and it takes at least one to three years to pay off until the point when the group starts making money,” she said. But Park ended up with more debt than money because she wasn’t given the opportunity to promote herself, which was one of the main reasons she decided not to continue her K-pop career.

“Doing what you love and making money sounds almost too good to be true,” Park said.