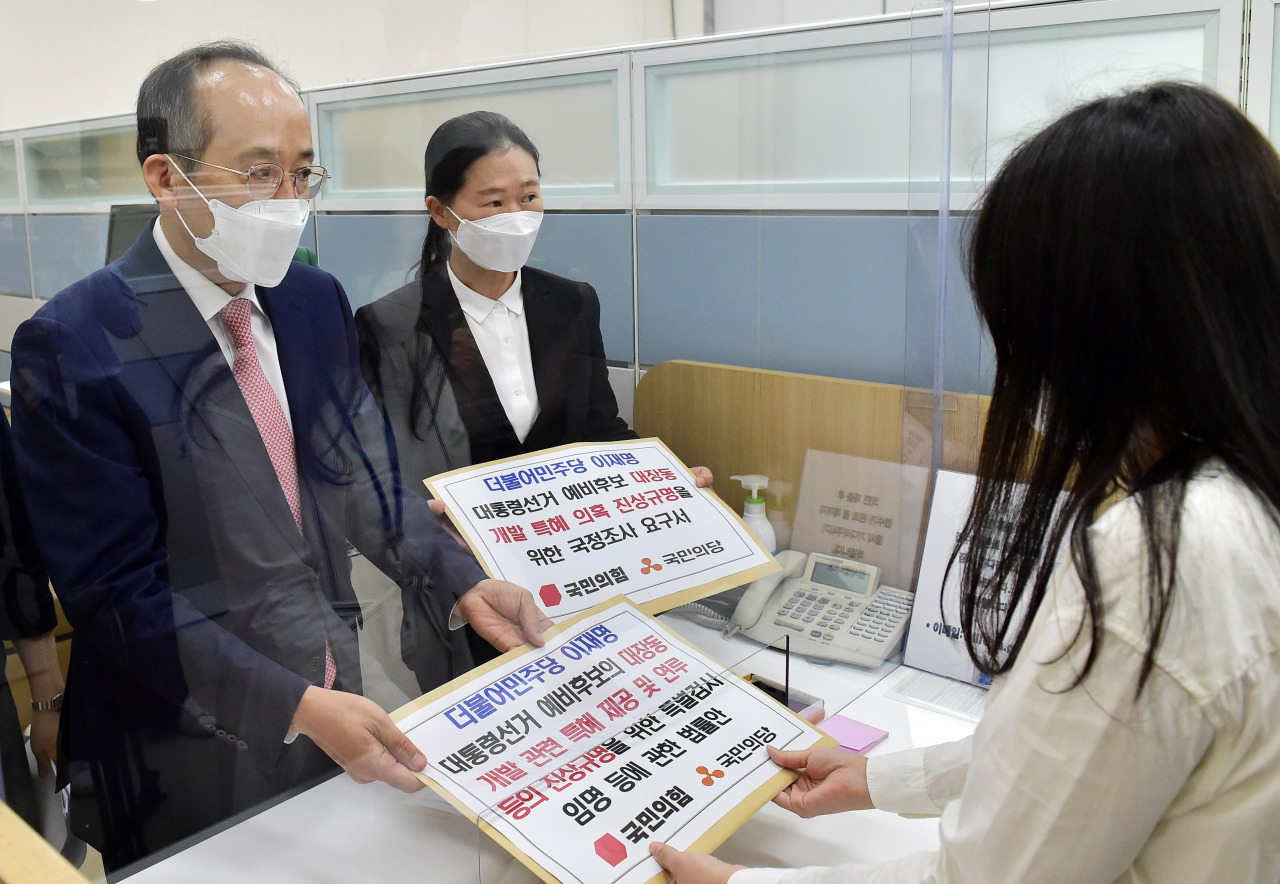 This photo, distributed by the National Assembly press corps, shows Rep. Choo Kyung-ho (L), chief deputy floor leader of the People Power Party, and Rep. Kwon Eun-hee, floor leader of the People's Party, submitting a bill and a letter calling for the appointment of a special counsel and a parliamentary probe into corruption allegations against Gyeonggi Gov. Lee Jae-myung (Yonhap)
Two allied opposition parties on Thursday proposed a bill for a special counsel probe into growing corruption allegations against Gyeonggi Province Gov. Lee Jae-myung, the front-running presidential contender for the ruling party.

The main opposition People Power Party and the conservative minor People's Party together said they submitted the bill to the legislature earlier in the day, along with a letter officially requesting a parliamentary investigation into the allegations.

The bill, proposed and endorsed by all 107 lawmakers from the two parties, calls for the appointment of an independent counsel to be in charge of investigating the allegations that Lee gave business favors to certain companies to join a lucrative public land development project in the Seongnam city's Daejang district in 2015 when he was the city's mayor.

The parties also claimed in the bill seven companies, including Hwacheon Daeyu, with a combined capital of 350 million won (US$297,063) pocketed more than 400 billion won in dividends from the public land development project and Lee was involved in the process.

The bill set the scope of its proposed investigation to range from the alleged abuse of power and embezzlement by officials at the city of Seongnam, the city's land development agency and other firms involved in the controversial project, and the alleged granting of business favors as well as the suspected abuse of insider information.

Under the bill, the president is entitled to pick a special counsel out of two candidates consented by rival parties after the Korean Bar Association proposed four initial candidates. The investigation is to run for up to 70 days and renewable once by 30 more days.

The prospect of the bill's parliamentary passage is unclear, however, as such a bill on a special counsel requires a majority vote at a plenary voting session. Currently, the ruling Democratic Party controls 169 of the National Assembly's 300 seats.

"As there are limits (in the probe) by investigative bodies, a parliamentary investigation (needs to step in) to look into the allegations, thus preventing the spread of corrupted development projects like this one into other municipalities," Rep. Kwon Eun-hee, floor leader of the People's Party, told reporters.

Police have earlier said an internal probe is currently under way after they were informed in April of a suspicious flow of funds at Hwacheon Daeyu.

Lee flatly denied the possibility of any irregularities in the project and pledged, "I will step down (as presidential contender and governor) if I profited a penny from it." (Yonhap)