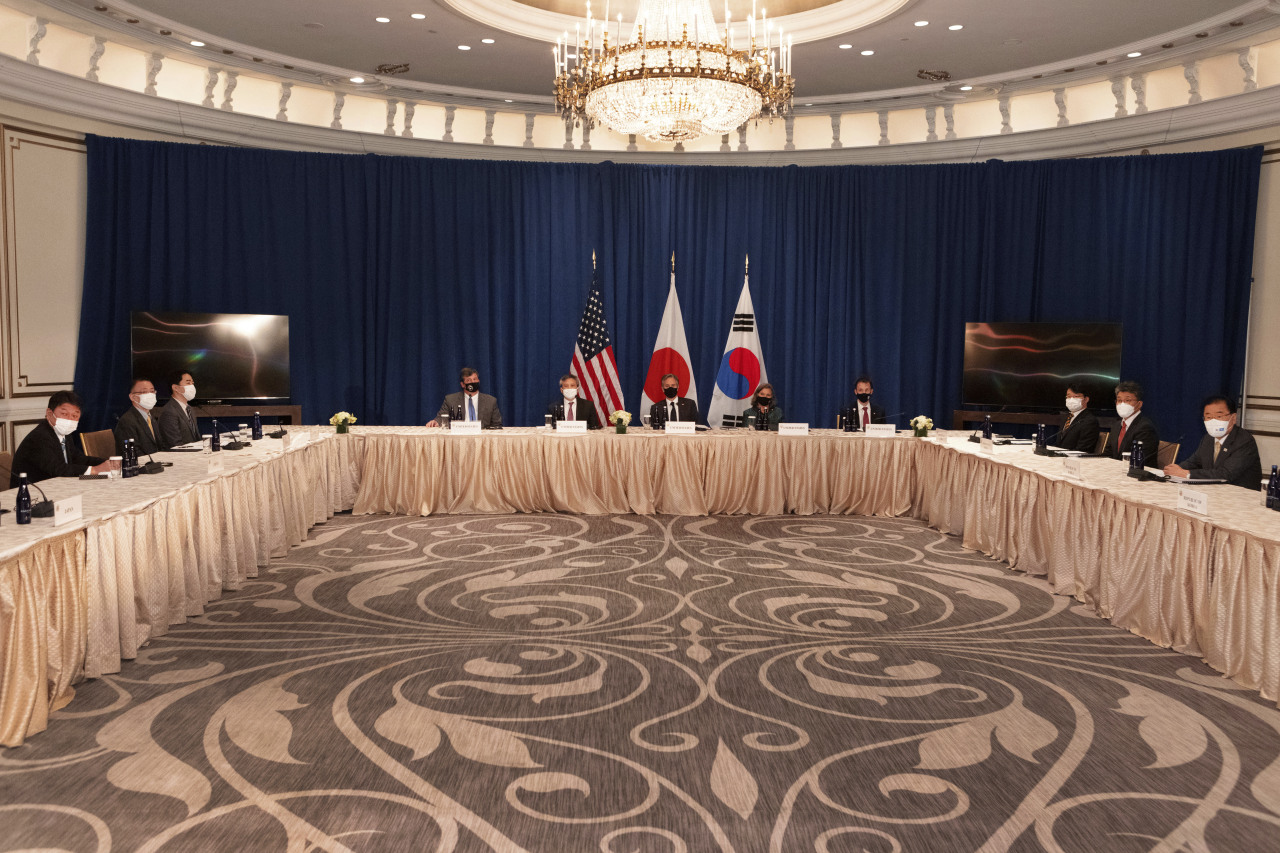 South Korea's Foreign Minister Chung Eui-yong (far right) meets with US Secretary of State Antony Blinken (center), and Japan's Foreign Minister Toshimitsu Motegi (far left) on the sidelines of the 76th Session of the United Nations General Assembly on Wednesday in New York. (AP-Yonhap)
South Korea, the US and Japan will further bolster cooperation to persuade North Korea to abandon its nuclear arsenals, the three countries’ foreign ministers concluded at a meeting on Wednesday.

South Korean Foreign Minister Chung Eui-yong held talks with US Secretary of State Antony Blinken and Japanese Foreign Minister Toshimitsu Motegi on Wednesday (US time) in New York, on the sidelines of the UN General Assembly.

During their session, the three discussed the recent situation on the Korean Peninsula, and pledged to strengthen diplomatic efforts for the complete denuclearization and establishment of permanent peace on the peninsula, according to the Foreign Ministry.

The three-way talks come a day after South Korean President Moon Jae-in reiterated calls for a formal end to the 1950-53 Korean War -- that finished in an armistice and not a peace treaty -- in his address to the UN General Assembly.

It also arrives as tensions are running high on the peninsula, after the North fired two ballistic missiles into the East Sea last week, defying a UN ban, just days after testing a new long-range cruise missile.

The three discussed Moon’s proposal to end the Korean War, with Minister Chung explaining to Blinken and Motegi that the end-of-war declaration could serve as an important momentum in the progress toward the peace process on the peninsula, according to Foreign Ministry spokesperson Choi Young-sam.

The trio also touched on the North’s missile test, with Motegi saying the North’s recent missile launches “pose a threat to Japan, the region and the international community and we shared the view,” according to Kyodo News.

The Biden administration has put trilateral ties with Seoul and Tokyo at the center of its Asia policy, as it believes a security coalition of like-minded allies is key to tackling mounting challenges in the region, such as containing China’s aggression and North Korea’s nuclear ambitions.

The three ministers last met in person in May on the margins of the Group of Seven foreign and development ministers meeting in London.

Aside from the North Korean issue, the top diplomats also discussed ways to deepen cooperation between the three nations to tackle pressing global challenges, such as combatting the climate crisis and securing supply chains, according to the State Department.

It said the two discussed “creative and various” measures to engage the recalcitrant regime, without specifying details.

Seoul and Washington have been discussing the possibility of offering humanitarian assistance to the North as a way to engage the regime, with Biden’s point man on North Korea, Sung Kim, saying the US supports aid to the North regardless of progress on denuclearization.

But the North has remained largely unresponsive, saying it will not return to talks until the US drops its “hostile” policy toward Pyongyang, an apparent reference to US-led sanctions.

Meanwhile, Chung is set to hold talks with Motegi on Thursday (US time), amid strained ties between the neighbors due to an ongoing trade and political feud