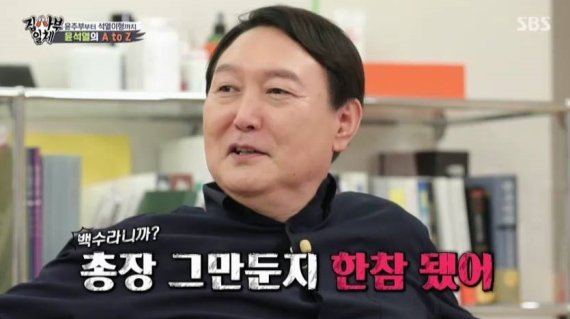 With the upcoming presidential election set for March, presidential hopefuls are going on reality TV programs to show their more personal sides in an attempt to woo voters.

Former Prosecutor General Yoon Seok-youl, a major presidential contender from the People’s Power Party, starred in an episode of SBS’ reality show “Master in the House” which aired on Sunday, giving the show hosts a tour of his home and cooking for them.

“I asked (the hosts) to come to cook them something nice,” Yoon said on the show. He showed himself to be a deft cook, preparing kimchi jjigae, bulgogi and egg rolls for the show hosts.

When asked how he made the decision to run for the presidency, Yoon answered, “It was not an easy decision to make.”

Yoon had to field some politically sensitive questions as well, such as whether he always wants to fight President Moon Jae-in and what former Justice Minister Choo Mi-ae means to him. Choo is considered Yoon’s political rival.

Gyeonggi Province Gov. Lee Jae-myung and former Prime Minister Lee Nak-yon, two presidential hopefuls from the ruling Democratic Party, will also appear on the same program in the coming weeks. The three are currently seen as the strongest candidates in the upcoming presidential election.

It is not the first time Lee Jae-myung will star in a reality show. In 2017, Lee appeared with his wife on the SBS reality show “Same Bed, Different Dreams,” a show where married couples talk about their relationship and overcoming obstacles.

Over the years, it has become a norm for politicians to star in TV reality shows, revealing a more private, human-side of themselves.

Political heavyweight Na Kyung-won, former floor leader of the conservative opposition, featured on TV Chosun’s “Flavor of Wife” with her family in January, showing herself as a mother and wife. In 2018, then-former and current Seoul Mayor Oh Se-hoon, featured on the same TV show, making his return from a seven-year political hiatus from the public eye.

In 2012, then-presidential candidates Moon Jae-in and Park Geun-hye featured on SBS talk show “Healing Camp,” sharing their political visions and personal stories. Their appearance on the talk show created a buzz at the time.