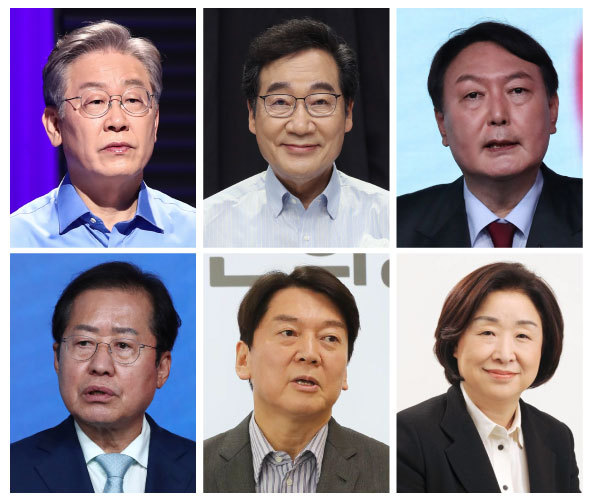 The election is still nearly half a year away, but the race for the South Korean presidency is already heating up. Despite the two largest parties -- the ruling Democratic Party and the main opposition People Power Party -- having already shed several hopefuls, the number of people vying for the nation’s top job still stands at 30.

This is a quick rundown of some of the main candidates.

Gyeonggi Province Gov. Lee Jae-myung’s life is South Korea’s quintessential rags-to-riches tale, a backstory that has given him a unique appeal to the working class and to young voters concerned about fairness and justice.

Gov. Lee was born into a poor farming family as the fifth of seven children and spent most of his school years working in factories. He took equivalency tests to earn his middle and high school diplomas, and later he passed the South Korean bar exam and worked as a labor rights lawyer.

As a politician, Lee has shown decisive action and follow-through. He has succeeded in getting publicity by paying careful attention to timing and earned nationwide fame early on in his career.

While he has gone against his party at times, his support ratings have held steady.

The governor has stayed consistent with his political beliefs and core values, which has helped him build a concrete support base since he first joined politics in 2005 as a member of the defunct liberal Uri Party.

Former Democratic Party Chairman Lee Nak-yon is the other major contender for the ruling party’s ticket. He has a strong appeal to supporters of President Moon Jae-in, especially after former Prime Minister Chung Sye-kyun, also a close aide of Moon’s, dropped out of the primaries.

Lee Nak-yon, who spent nearly 20 years as a journalist before entering politics, has a proven track record of success in leadership as a lawmaker and prime minister. He comes from South Jeolla Province, one of the two main strongholds for the Democratic Party, which guarantees some level of support from party members and liberal voters.

However, the Democratic Party’s crushing defeat by the main opposition People Power Party during April mayoral by-elections has left a significant dent in Lee Nak-yon’s standing.

His major disadvantage is that his support base and campaign success depend so heavily on his party. Overall discontent with the ruling party has grown over time, and support for Lee Nak-yon, one of the closest aides to the Moon administration and a key member of the dominant faction within the Democratic Party, has fallen accordingly.

The 60-year-old is a political novice whose showdown with the Moon administration stirred the political landscape and made him popular among conservatives and those seeking change at Cheong Wa Dae.

A career prosecutor, Yoon oversaw an investigation into the corruption scandal that ousted conservative President Park Geun-hye in 2016, which ultimately put Moon in power. When Moon took office, Yoon climbed up the rankings and was appointed as prosecutor general in 2019, tasked with leading the drive to root out corruption in keeping with Moon’s mandate.

But Yoon later clashed with the president over investigations into Moon’s close aides, and he pushed back against the administration’s drive for prosecution reform. He stepped down in March and kicked off his presidential campaign.

Yoon’s popularity can be attributed to his hard-hitting rhetoric and fearless fight against the authorities and Korea Inc. throughout his legal career -- a breath of fresh air to members of the public who are tired of old-school politics.

But questions about his political competence, a series of corruption allegations, scandals involving his family and a weak political base could get in the way before the election in March.

With more than two decades in politics behind him, Hong, a former prosecutor, served as the leader of the Liberty Korea Party -- predecessor to the current main conservative party -- and as the governor of South Gyeongsang Province. He ran against President Moon Jae-in in the 2017 presidential election.

The tough-talking politician has often been compared to former US President Donald Trump for his outspoken, uncompromising rhetoric and political attacks.

It is his candid remarks that appeal to the younger generation, especially his controversial pledges to actively promote the death penalty, revive state-run exams for lawyers and abolish the draft in favor of an all-volunteer military. Hong is especially garnering support from men in their 20s and 30s.

With Hong quickly closing the gap with opposition front-runner Yoon Seok-youl in some opinion polls, winning the party’s ticket could be a real possibility.

But he is still regarded as a risky figure to carry the conservative flag, considering his ultra-hard-line stances on major issues and past controversial and sexist remarks.

Ahn Cheol-soo, the leader of the People’s Party, has yet to announce his bid but is widely expected to try for the presidency for a third consecutive time.

He has listed robust security, new economic growth engines, education, labor and pension reforms and better protection of the people as key areas the country should address.

Ahn says his strength lies in the expertise he has cultivated as a physician, scientist, CEO and philanthropist, calling himself a pragmatist who will solve problems. He has claimed to have rejected what he calls “old politics,” saying it has failed the country for too long.

Ahn has a number of weaknesses, including hazy positions on major issues such as North Korea, the minimum wage and labor regulations. He has painted himself as part of the anti-Moon administration faction, but has fallen short of revealing a concrete agenda of his own.

Ahn has appeared indecisive at times. In one notable case just before the 2012 presidential election, he withdrew his candidacy and threw his support behind the liberal bloc, whose front-runner was Moon.

Rep. Sim Sang-jeung of the minor Justice Party is a progressive icon. A four-term lawmaker, Sim is a vocal supporter of labor unions and has pledged to put chaebol families under greater scrutiny. She has also said she intends to aggressively tackle climate change as president.

The public response to Sim’s suggestion that the country introduce a four-day workweek has been mixed. Sim says reduced working hours are a right that all South Koreans should enjoy as citizens of a developed country. More people would have jobs, she says, and job seekers would have more opportunities.

Sim supports curbing the power of the country’s family-owned conglomerates.

The 62-year-old liberal leader believes platform tech companies such as Naver and Kakao should be kept in check to ensure workers get fair treatment. Sim has proposed rolling out stronger anti-monopoly rules for the tech giants, which have been accused of unfair trade practices.

Reducing carbon emissions is one of Sim’s two key foreign policy promises. She argues the country should go “coal-free” by 2030, though many experts doubt the viability of any plans to do so given the limited time to overhaul an economy that relies heavily on fossil fuels.

Floating a grand proposal that North Korea cannot rebuff is the other initiative Sim is backing. Seoul should assure Pyongyang that it will not face a regime change and should invite the reclusive state to take part in the global economy, she contends, though she has yet to offer details on how that could be achieved.