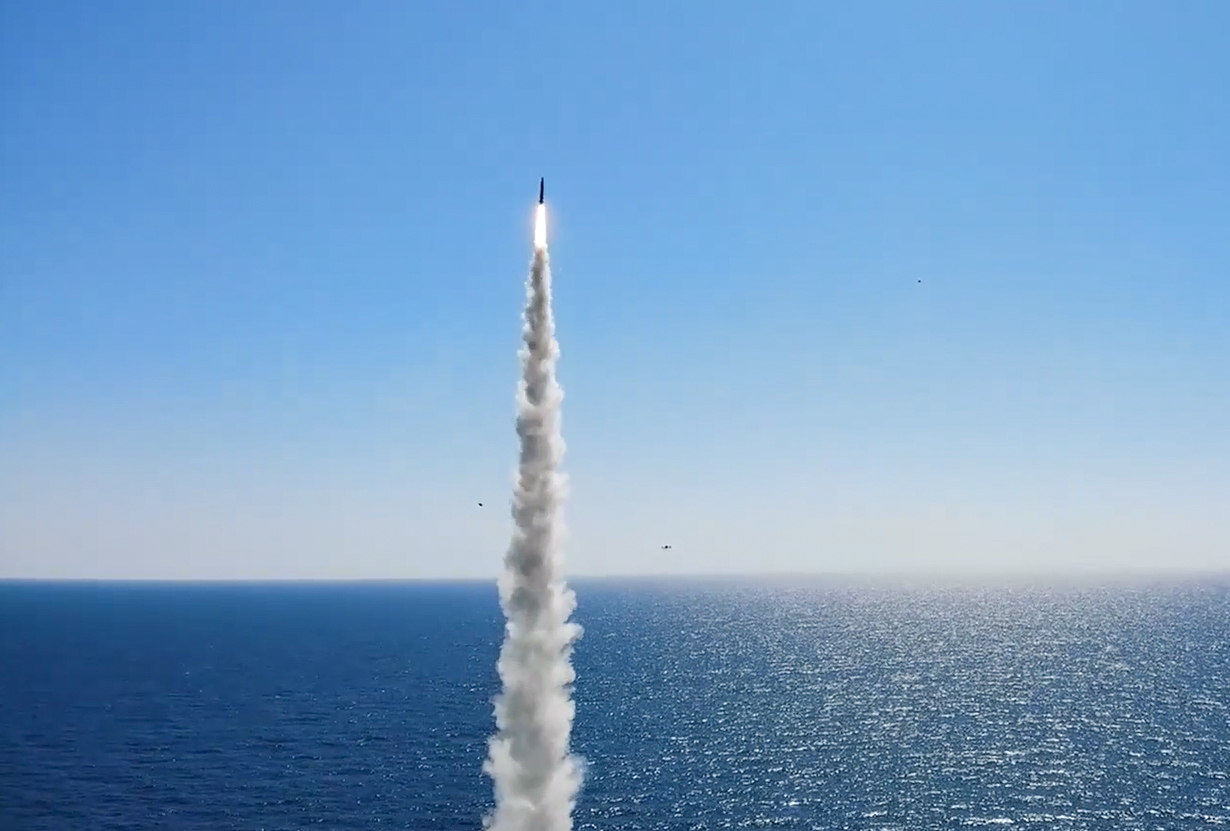 South Korea’s SLBM test. (Ministry of National Defense)
North Korea said Monday that the submarine-launched ballistic missile South Korea test-fired last week was primitive and not a threat. Pyongyang is seen as trying to discredit Seoul’s missile capabilities because South Korea is the first non-nuclear state to have tested an SLBM.

Previously, SLBMs had been developed by only six countries: China, France, India, Russia, the UK and the US.

“South Korea’s SLBM will not be effective in war. No strategic or tactical value there,” the official Korean Central News Agency said, citing North Korea’s national agency for research and development in defense technology.

The KCNA cast doubt over whether South Korea had actually test-fired a homegrown SLBM, saying it did not appear to be an actual SLBM based on the photos released by Seoul.

North Korea is still working on a submarine capable of firing SLBMs. Pyongyang, which in 2019 revealed a modified Soviet-era Romeo class model, has never publicly test-fired an SLBM from the 3,000-ton submarine.

North Korea, which last tested its SLBM lineup in October 2019 with the Pukguksong-3, revealed the latest 5 series in January this year. The 5 series has never been tested.

And it is unclear how long the North Korean submarines can stay underwater or how deep they can go -- essential questions to determine whether a surprise attack is possible.

Meanwhile, the South Korean military is planning to deploy its first SLBM in the second half of next year, sources said Monday.

“We’ll run a few more tests before putting it on the submarine,” a Seoul official said, referring to the Dosan Ahn Chang-ho class submarine, the country’s first homegrown 3,000-ton vessel. The Navy received it last month and plans to deploy it as early as August next year.

The South Korean military is working to roll out nine submarines by the early 2030s, including the Dosan. It is looking to make two more 3,000-ton ships, three 3,600-ton ships and three 4,000-ton ships. The 3,000-ton class could carry as many as six SLBMs, with the rest capable of firing up to 10.

The SLBM on the Dosan class will be from the Hyunmoo series, capable of flying about 800 kilometers and reaching any part of North Korea.

The military has said it will increase its range and firepower, though experts say South Korea cannot hope to bridge the gap in missile technology as long as North Korea’s missiles carry nuclear warheads.

North Korea, which under the UN Security Council resolutions is banned from developing or testing ballistic missiles but not cruise missiles, has repeatedly said it will bolster its preemptive strike capabilities.