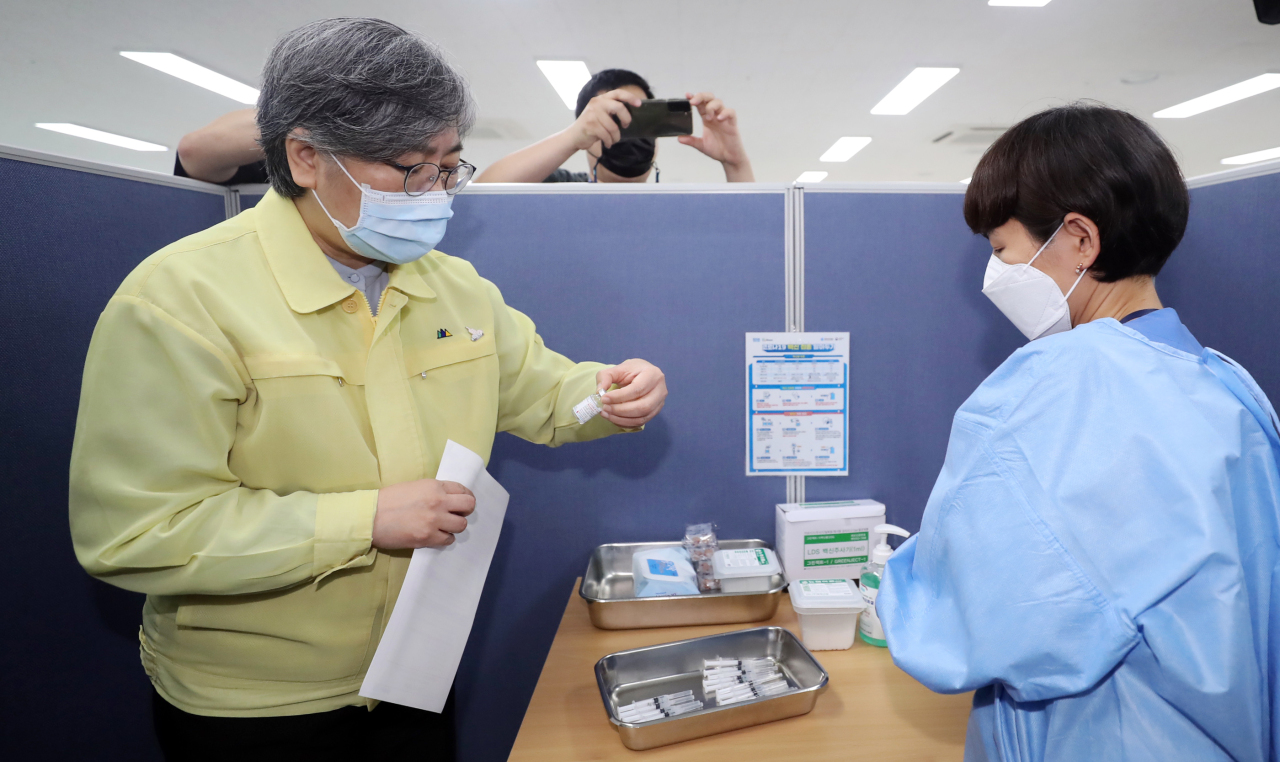 South Korea is close to reaching its goal of having 70 percent of the population vaccinated with a first dose of a COVID-19 vaccine before Saturday, when this year’s Chuseok holiday begins.

So what does this mean for the country’s pandemic response going forward?

Lee Ki-il, the Ministry of Health and Welfare’s deputy minister for health care policy, told Friday’s televised news briefing that Korea was close to hitting “a significant milestone in the vaccination campaign against COVID-19.”

Some 36 million people, or 70 percent of the Korean population, will have had at least one dose, more than six months since the very first batch of vaccines were put in arms back in February. As of Friday noon, the first-dose rate stood at 69 percent.

As the two rounds of Pfizer and Moderna vaccinations -- which have been the most widely distributed kinds here since July -- are completed within six weeks, the share of fully vaccinated people is expected to rise to 70 percent sometime in October.

The interval between the first and second AstraZeneca dose has been shortened to four weeks from eight weeks to boost the second-dose uptake, according to Thursday’s announcement.

Moving up appointments for a second Pfizer or Moderna dose, which is scheduled at six weeks after the first, is now possible through the online signup systems for “leftover” vaccines.

In the same briefing, the ministry’s spokesperson Son Young-rae said at the current trajectory, Korea was “anticipated to get to 80 percent, possibly even higher, within October.”

Asked to explain what crossing the 70 percent mark for first doses would entail for COVID-19 control in the country, he said that one dose still provided strong protection against hospitalizations and deaths.

But one dose of a vaccine is known to be less effective in preventing infection with the delta variant, which accounted for 98 percent of all analyzed cases last week. Nearly 1 in 5 patients diagnosed between July and September here were first-dose recipients awaiting their second dose, according to official statistics Wednesday.

Despite the vaccine progress, the fourth wave of the pandemic is not dying down, with 2,008 more cases confirmed in the latest 24-hour period until Thursday midnight. So far in September, an average of 1,796 cases were logged each day, slightly higher than the daily average seen in August of 1,712 cases.

Lee, of the Health Ministry, said this was due to the impact of delta, which is “about three times more contagious than the original virus found in Wuhan,” China, and the easing in social distancing restrictions earlier this month.

The limit on private gatherings has been eased to allow up to eight people to mingle past 6 p.m. -- if at least four among the group are fully vaccinated. Throughout summer only two people could meet up at a time in the evening.

“Our projections indicate that Korea will be heading on a downward trend for case rates over the latter half of September,” he said.

The ultimate goal is to raise the full vaccination coverage, Jeong Eun-kyeong, the Korea Disease Control and Prevention Agency’s commissioner, told reporters at a vaccination clinic near the agency’s headquarters in Cheongju, North Chungcheong Province.

“The most important task is to have more people fully immunized,” she said. “Do not to skip the second dose when the time comes.”

As of Friday’s count 41 percent in Korea were fully vaccinated.

By age, the full vaccination rate was highest in people who are in their 70s at 89 percent, followed by those in their 60s at 86 percent and those in their 80s and older at 79 percent.

For people in their 50s, for whom vaccinations began in the last week of July, it was 40 percent. The cohort of 30-somethings, many of whom were offered the US-supplied Johnson & Johnson vaccines in June, came next at 31 percent. For 40-somethings and 20-somethings, it was a tie at 26 percent.

An even busier phase in the rollout is ahead in October, when vaccinations for minors under 18 and pregnant women are planned, as well as third “booster” vaccinations for older, vulnerable people.