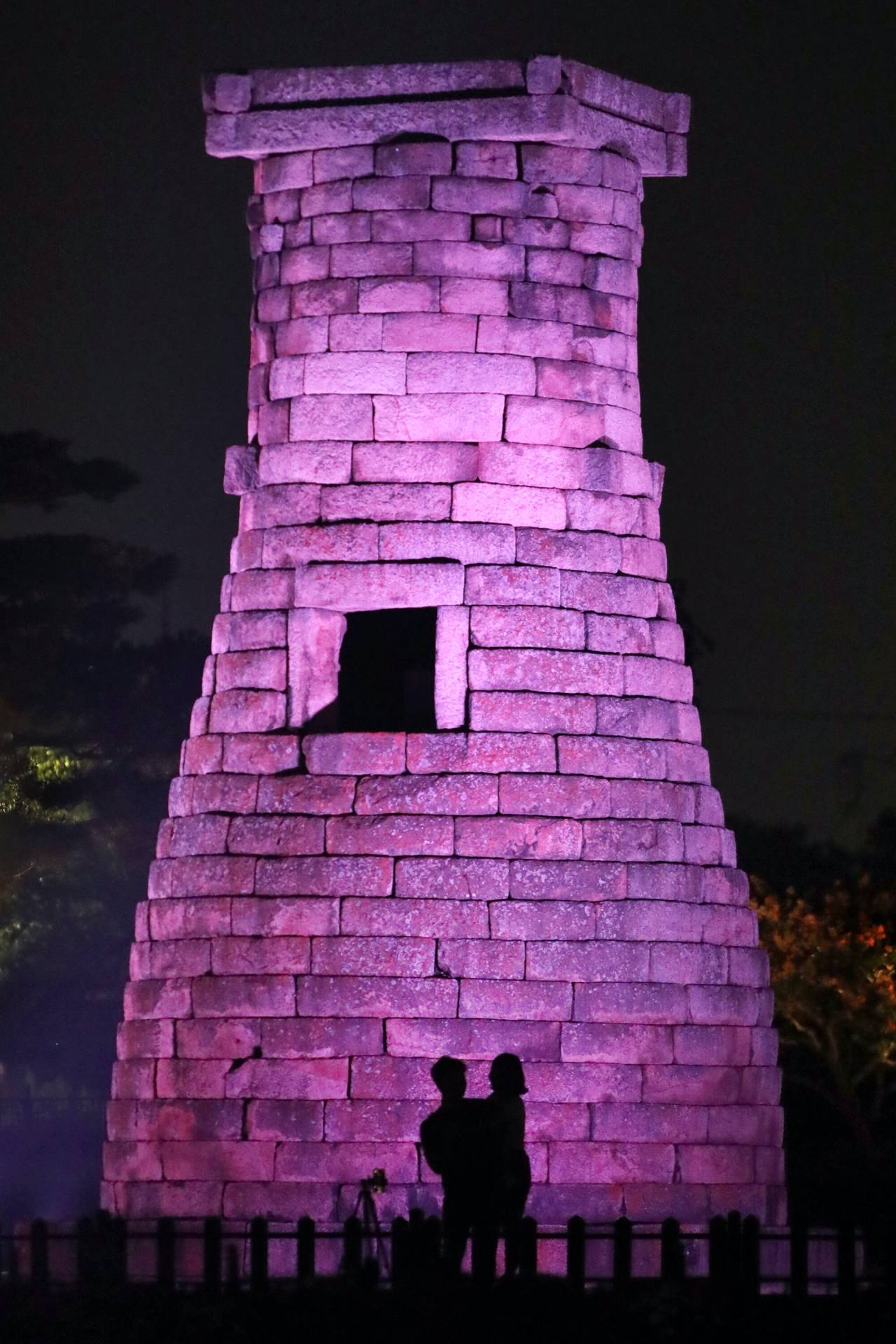 A couple is silhouetted in front of Cheomseongdae, the oldest surviving astronomical observatory in the world. It was constructed in 633 in the Silla Kingdom, in Gyeongju, North Gyeongsang Province.Photo © 2020 Hyungwon Kang
Reading the celestial skies and understanding mandates of heaven has always been the exclusive domain of kings and emperors.

When Queen Seondeok of Silla became the first female ruler in Korean history, not everyone welcomed her. In fact, her 15-year reign was riddled with rebellions and wars which undermined her rule.

King Jinpyeong, who held the longest reign of all Silla kings, for 54 years, had no son (in his caste) to hand over his throne.

Because the Silla caste system allowed Seonggol to marry only within their class, by the 26th King Jinpyeong, they had exhausted themselves of all male heirs as a result of the inbreeding.

Upon coronation following a unanimous approval by the Hwabaek, the chief Seonggol Royal Council of Nobles, Queen Seondeok had the Cheomseongdae, an astronomical observatory, built during her second year in power in 633 -- perhaps to pacify the naysayers and to claim the mandate of heaven.

Cheomseongdae, located just a stone’s throw away from the royal palace, would have provided an exclusive daily reading of the heavens and timely access to celestial messages.

Celestial messages could make or break a kingdom back in the day. Managing intelligence was vital to the survival of any royal family, let alone celestial news.

When a falling star, an omen of change in the kingdom, was observed during the Bidam rebellion of 647, Gen. Kim Yu-sin had a large kite climb the next night sky with a burning scarecrow streaming behind it, and spread the news that “The star that fell last night went up to the sky again!” Gen. Kim quelled the rebellion and executed all nine families implicated in the treason. 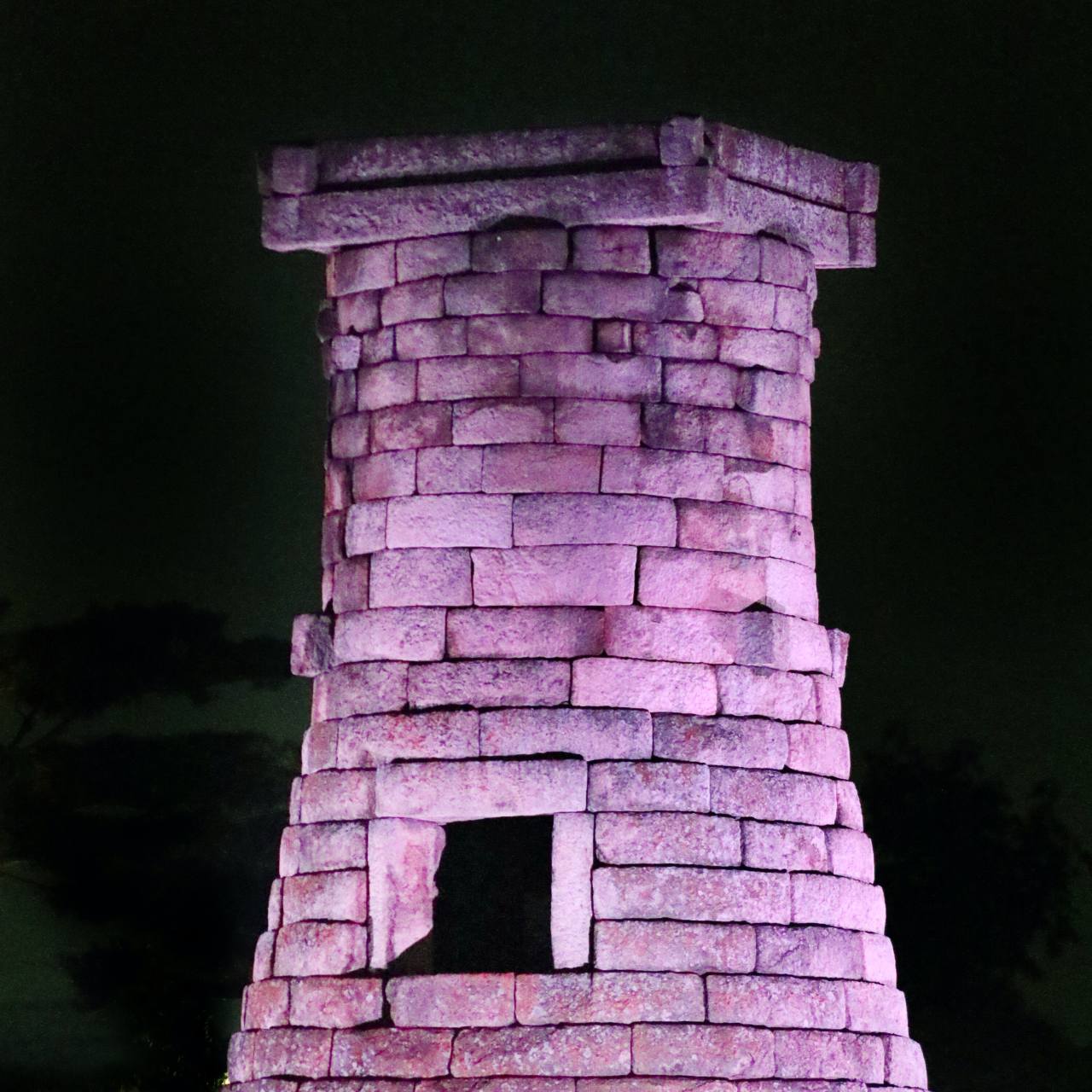 Local elders remember the Cheomseongdae being called “Bidu” until the turn of the 20th century. Bidu is a combination of two words -- “bi,” meaning to compare, and “du” standing for “bukduchilseong,” or the Big Dipper.

In fact, the Big Dipper and the sky around it can be observed from Cheomseongdae all year around.

The bottle-shaped astronomical observatory is made of granite stones standing on two layers of square foundation, which sits on the ground reinforced with approximately 1.5-meter-deep layer of gravel, rocks and dirt. The observatory is designed to withstand earthquakes, with its bottle-shaped cylindrical structure topped with two layers of an interlocked square frame at the top. 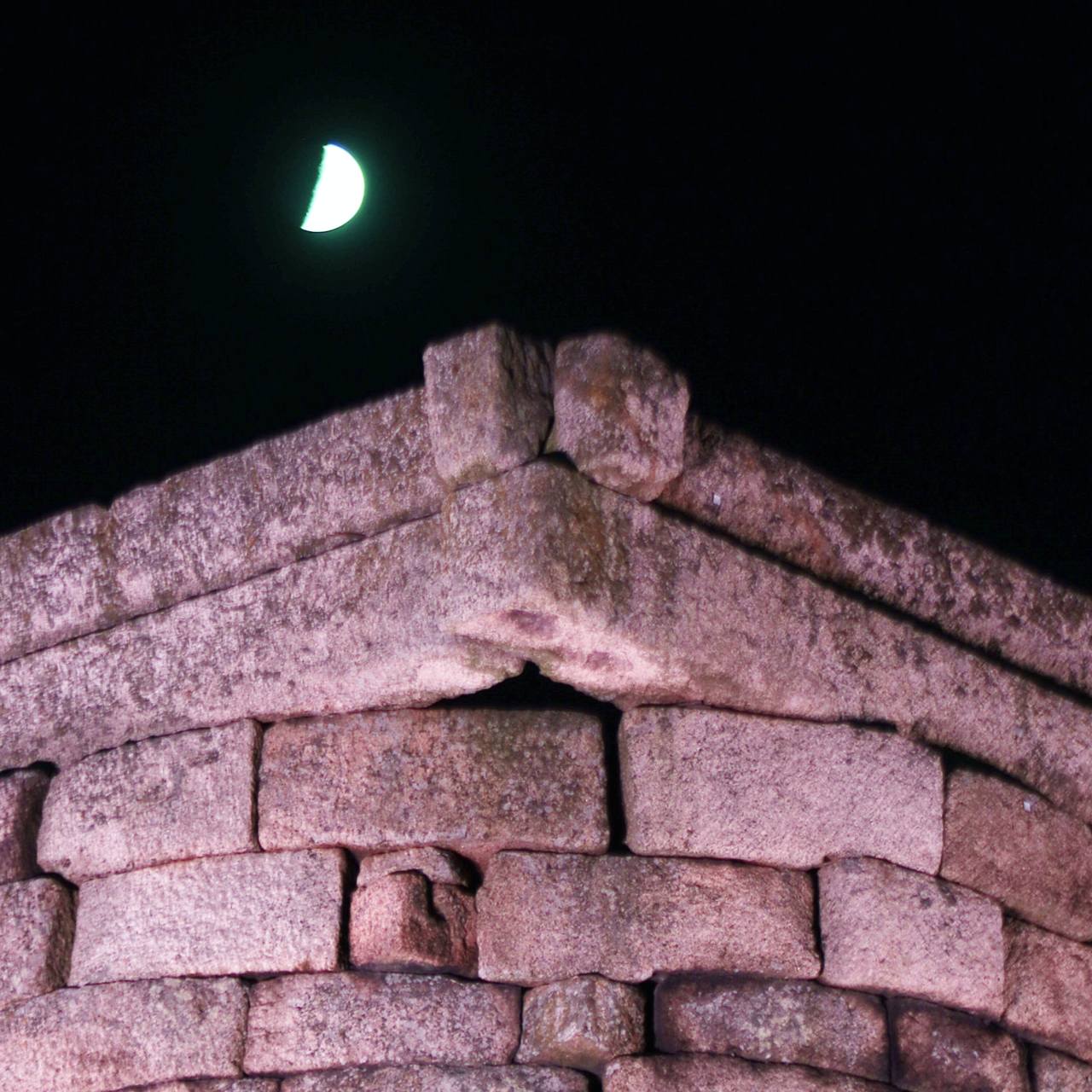 Cheomseongdae, the oldest surviving astronomical observatory in the world, was constructed in 633 in Silla Kingdom, in Gyeongju, North Gyeongsang Province.Photo © 2020 Hyungwon Kang
In building the observatory, 365 pieces of stone were used, representing the total number of days of the year. There are 27 round layers that represent Queen Seondeok, the 27th monarch of Silla. A total of 24 layers -- 12 bottom layers and 12 top layers -- represent the 24 solar terms in the lunar calendar, with three layers taken up in the middle for the only opening facing the south, through which sunlight shines year-round.

The bottom 12 round layers are filled with soil and pebbles, adding to the structural integrity and creating a center of gravity which returns the Cheomseongdae to its center after any earthquakes.

For almost 1,400 years, Cheomseongdae has withstood all weather events and multiple earthquakes, standing upright and holding its original shape.

While Koreans have been painstakingly keeping track of astronomical observations for several millennia, ancient record-keeping shows that celestial activity records increased exponentially after 633, the year Cheomseongdae was built.

Ancient Koreans followed celestial observations to understand weather patterns linked to agriculture, and to follow heaven’s mandate on their rulers.

One of the oldest ancient Korean astronomical observations is from the Gojoseon (Ancient Joseon) period (2333 BC-108 BC).

Astrophysicist Park Chang-bom, using NASA software to track planetary movements, confirmed a rare astronomical phenomenon observed in 1734 BC, of five planets -- Mercury, Venus, Mars, Jupiter, and Saturn -- lining up in the sky. The historical records had it written down as 1733 BC, an error of just one year. A one-year difference going back almost 4,000 years seems like a negligible margin of error.

Such a rare astronomical phenomenon, the lining up of Mercury, Venus, Mars, Jupiter, and Saturn, which are wood, fire, gold, earth, and water in Korean astrology, would have been a regime-changing event for the ancient people.

Additionally, astrophysicists Park and La Dai-Le reported in their research, titled, “Confirmation and Historical Consequences of Astronomical Records in Samguksagi,” based on their scientific calculations, the most likely places for observations of solar eclipses during the Baekje Empire, Goguryeo and Silla.

There were 67 recorded solar eclipses, of which 11 took place after Silla unified the three kingdoms (676-935). Fifty-six solar eclipses would have likely been observed near Inner Mongolia for Goguryeo, Yangtze River Valley for Silla, and Balhae Bay (Bohai Bay) in the northwestern and innermost gulf of the Yellow Sea, not too far from Beijing, for the Baekje Empire. These findings confirm the long-held understanding of the presence of Korean kingdoms in the mainland back in the day.

Cheomseongdae is said to have been modeled on the earlier Baekje’s Jeomseongdae observatory, which now exists only in historical records.

Queen Seondeok, who had three husbands, including one of her uncles belonging to the Seonggol caste, failed to produce a male heir.

When she died fighting a rebellion in 647, her cousin succeeded to the throne and became Queen Jindeok of Silla as only the second female ruler in Korean history, the 28th monarch of Silla and the last of the Seonggol caste to reign in Silla’s 1,000-year history.


Korean American photojournalist and columnist Hyungwon Kang is currently documenting Korean history and culture through images and words for the future generations. -- Ed.