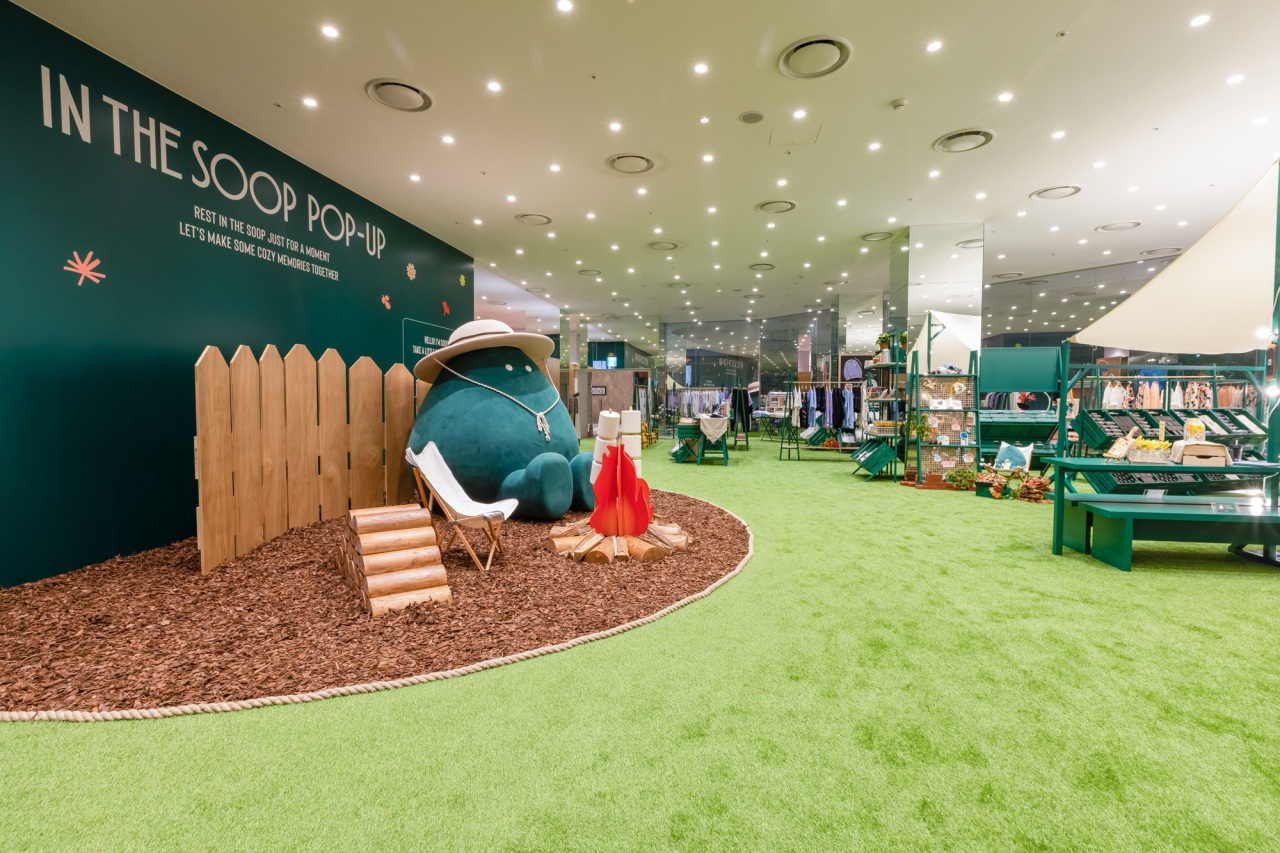 This file photo shows the main view of the In the SOOP pop-up store. (Hybe)
The amount of time K-pop entertainment giants get to greet fans has been ebbing as the coronavirus pandemic persists. But now, agency labels are reaching out to offline pop-up stores in and out of the country to garner more fans and customers.

The BTS Pop-up: Map of the Soul store offered products revolving around the group’s album “Map of the Soul: 7.” The stores were operated in five regions, including the United States and South Korea, for nearly four months through February. The shop in the nation’s capital alone attracted some 70,000 visitors during the period. 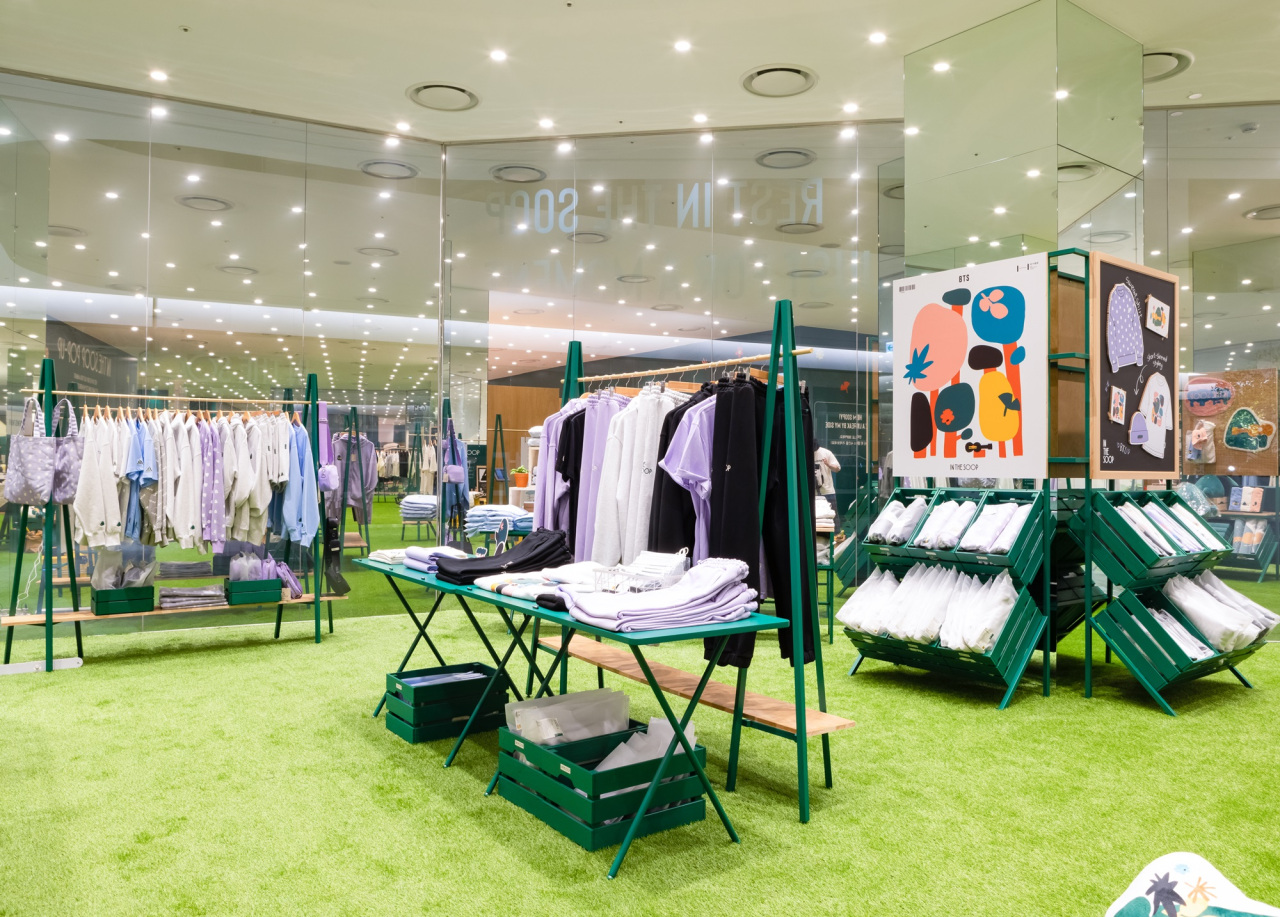 This file photo shows In the SOOP merchandise, including T-shirts, pajamas, hoodies, sweatpants, socks and sweatshirts. (Hybe)
Several K-pop powerhouses are hopping on the pop-up shop train by opening temporary stores in the Korean capital or major cities such as Busan to curate exclusive merchandise.

Hyundai Department Store and entertainment lifestyle platform Hybe, the company behind global sensation BTS, jointly launched a pop-up store called In the SOOP at the Hyundai Seoul in Yeouido.

The two said the launch of the event is part of its efforts to open up diverse experiences to consumers, especially millennials and Generation Z, who are rising greatly as major customers. 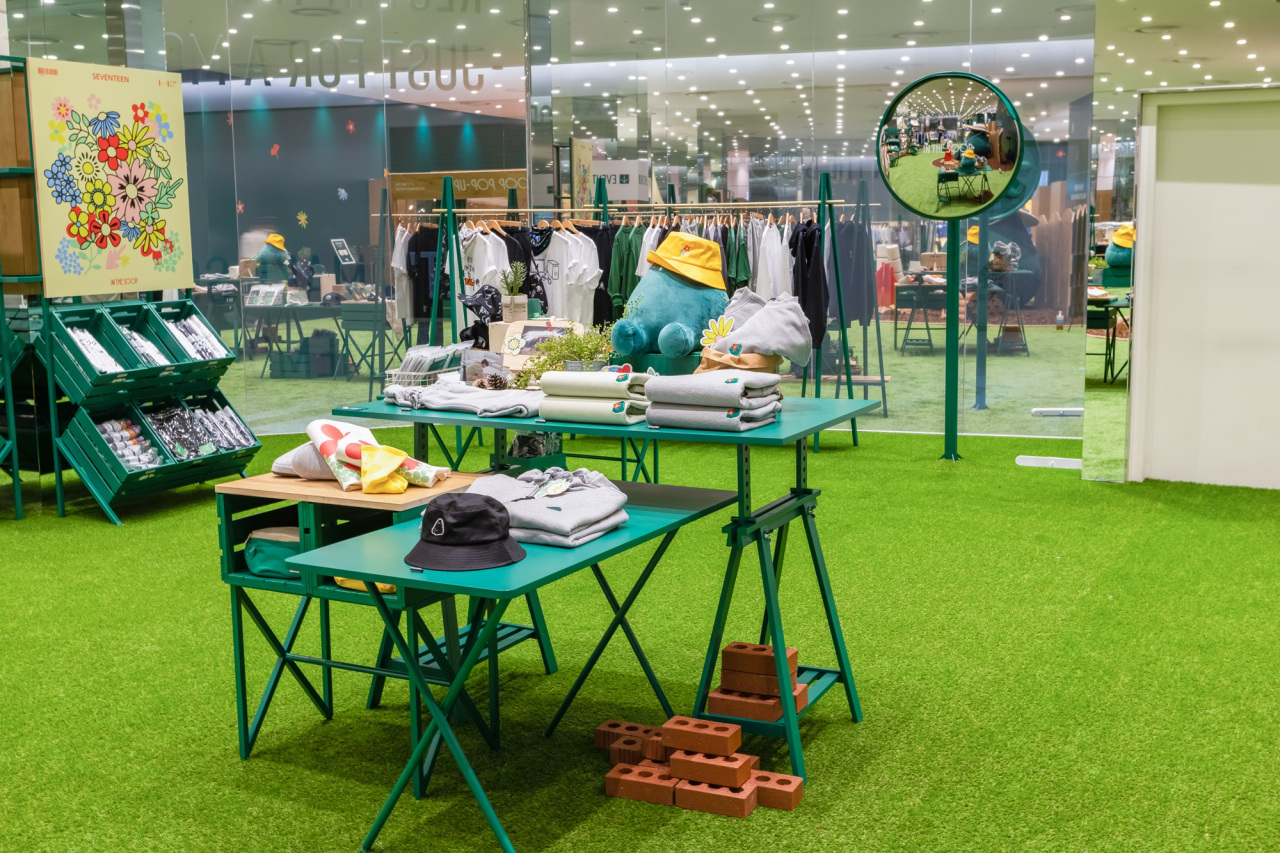 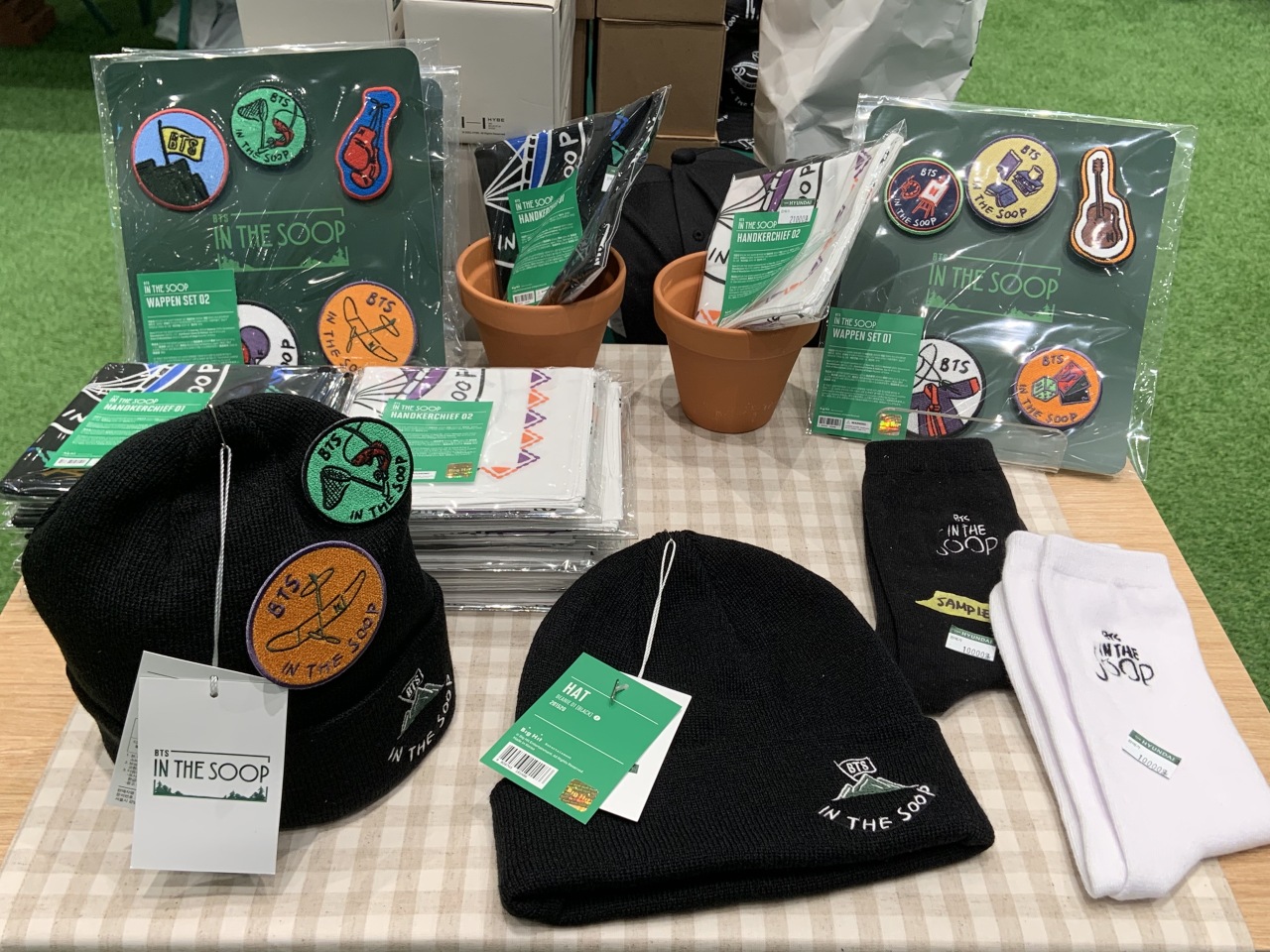 BTS merchandise such as hats and handkerchiefs are displayed on a table. (Park Jun-hee/The Korea Herald)
The pop-up retail shop is based on Hybe’s “In the SOOP” content, a reality program that allows idol groups the company houses to revel in the break and make new hobbies in nondescript areas.

“Soop” means forest in Korean, where the two groups -- BTS and Seventeen -- welcome fans to find a respite in nature. And as it suggests, the store welcomes visitors under the theme of “a healing forest at the heart of the city.”

The walls clad in restful green are ornate with slogans that read “Hello! I’m Soopy! Take a little break by my side,” luring passersby who peep into the store out of curiosity.

Although only a limited number of customers are able to step inside at the same time to prevent the spread of the coronavirus, the first floor of the shopping center is like a concert. At 2 p.m. on a Wednesday, hordes of fans found themselves scanning the QR code-based entry logs at the entrance.

Also, visitors who leave with goodies worth more than 150,000 won are granted either a BTS or Seventeen-themed cotton handkerchief. Many superfans can be spotted leaving with the special product and shopping bag. 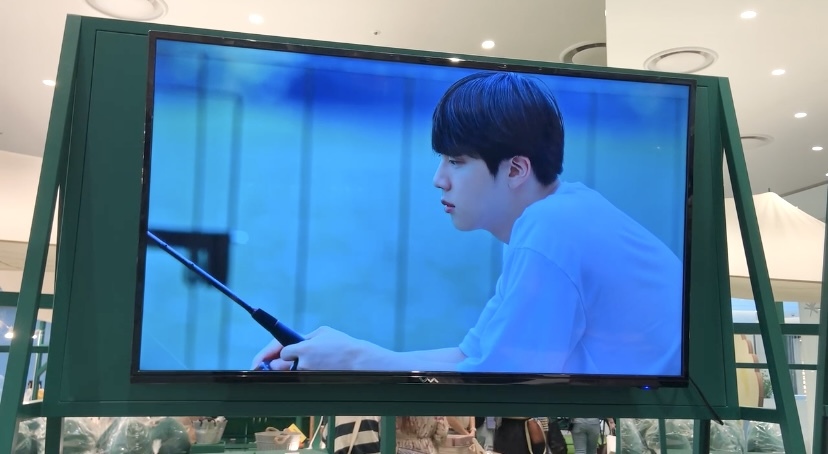 A scene from BTS’ version of “In the Soop” shows bandmate Jin fishing in the woods. (Park Jun-hee/The Korea Herald)
As the department store is cropping up as a new shopping hub for young people, students and even toddlers frequented the venue with their parents. Fans from the Philippines, Indonesia, Japan and China crossed borders to meet their favorite singers and put themselves at ease during times of trouble.

According to Hyundai Department Store, the number of posts on Instagram with the hashtag #TheHyundaiSeoul was 186,000 as of early September, the largest number among Korean department stores.

Professor Lee Eun-hee, a consumer studies professor at Inha University, said she thinks the Hyundai Seoul has a done a great job by teaming up with Hybe. 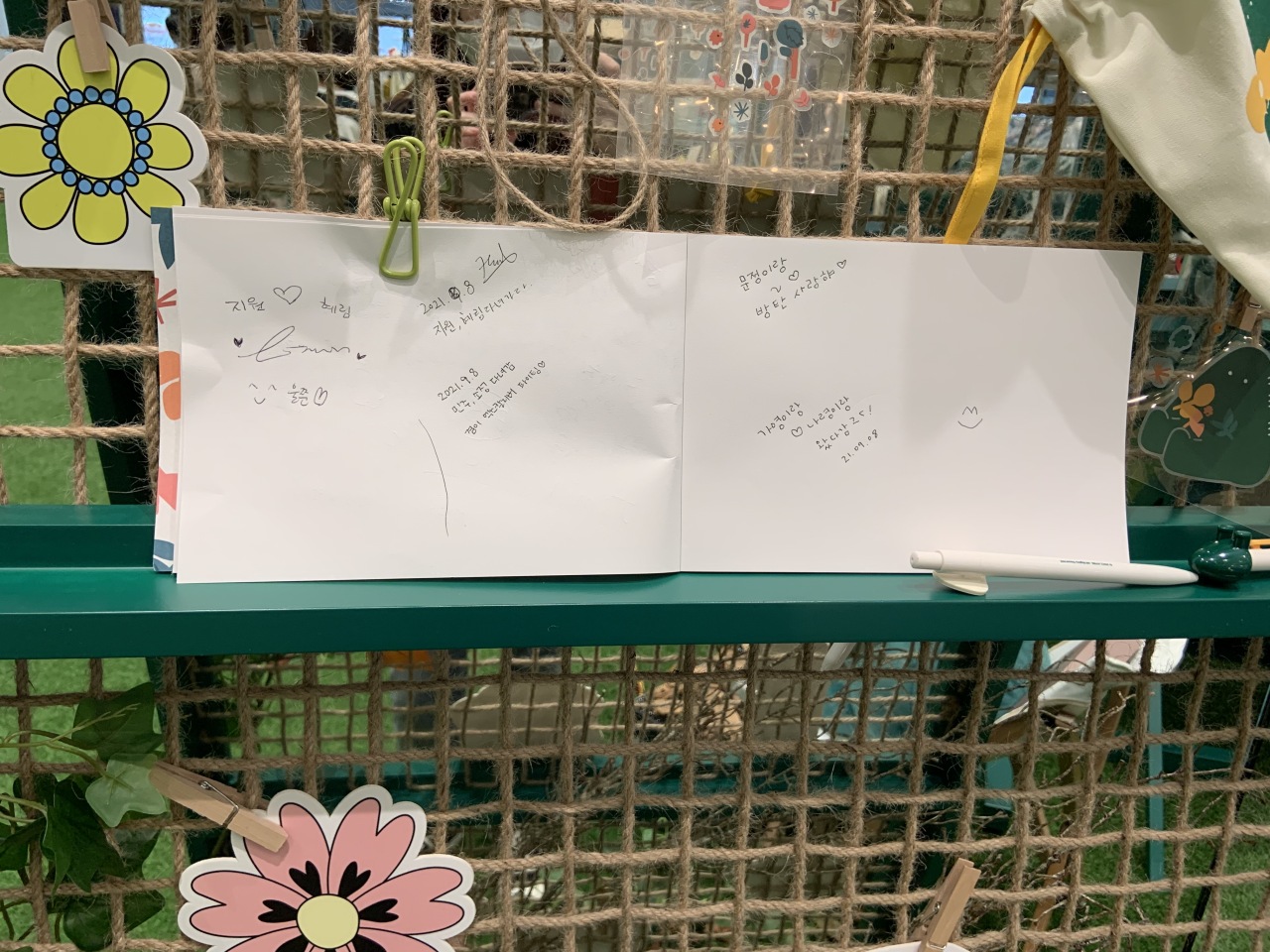 This file photo shows messages written by boy band BTS’ official fandom, Army. (Park Jun-hee/The Korea Herald)
“Many would come up with the term ‘luxury’ and ‘rich people’ if they think of a department store, but many youngsters donned in trendy fashion were roaming around the shopping mall when I made my visit. As a woman in my 60s, the vibrancy was something refreshing,” she said.

“Borders have been closed, but pop-up stores amid pandemic times allow fans to relish in new product lines and activities offered by agencies, putting fans and singers at ease.”

The event, which kicked off on Sept. 3, operates until Oct. 31 at the Hyundai Seoul in Yeouido, western Seoul.