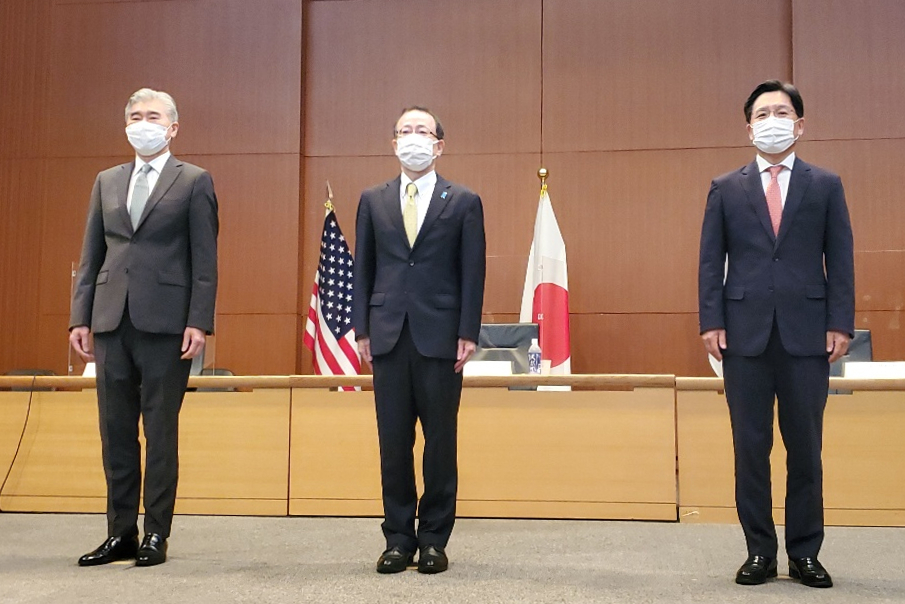 South Korea's chief nuclear envoy Noh Kyu-duk (right) poses with his US and Japanese counterparts, Sung Kim (left) and Takehiro Funakoshi, before their talks in Tokyo on Tuesday. (Yonhap)
Top nuclear envoys from South Korea, the US and Japan held a trilateral meeting in Tokyo on Tuesday to discuss how best to restart stalled talks and rid the North of its nuclear weapons, amid fresh tension after the regime’s latest missile tests.

The three-way session involved South Korea’s chief nuclear envoy, Noh Kyu-duk, and his US and Japanese counterparts, Sung Kim and Takehiro Funakoshi, respectively. A day earlier, the North announced it had successfully test-fired a new type of long-range cruise missile over the weekend, highlighting progress in Pyongyang’s military buildup amid a protracted standoff in nuclear negotiations with the US.

Despite the heightened tension in the region, President Joe Biden’s point man for North Korea reaffirmed Washington’s willingness to pursue dialogue with the recalcitrant regime.

“As we have made it clear repeatedly, the United States has no hostile intent with the DPRK,” Kim said at the start of the meeting, using an abbreviation for the North’s formal name, the Democratic People’s Republic of Korea. “We hope the DPRK will respond positively to our multiple offers to meet without preconditions.”

In the meantime, the US would continue to implement the UN Security Council resolutions against North Korea, Kim said.

The three touched on the North’s missile launch, with Kim stressing that the recent developments in the North served as a reminder of the need for close cooperation among South Korea, the US and Japan.

Funakoshi also said trilateral cooperation becomes “all the more important as North Korea advances furthermore in its nuclear and missile development,” according to Kyodo News.

During the meeting, the three envoys agreed “dialogue and diplomacy” was urgent to accomplish the complete denuclearization of the Korean Peninsula, according to South Korea’s Foreign Ministry.

The envoys also discussed humanitarian assistance prospects, with Kim saying the US supports humanitarian aid to the North regardless of progress on denuclearization.

The US envoy has sent similar messages since he was appointed as US special representative for North Korea in May. In June, during his first trilateral meeting with Noh and Funakoshi in Seoul, Kim said the US was willing to meet North Korea for dialogue “anywhere, anytime, without preconditions.”

In August alone, Kim and Noh met twice, and the US envoy reiterated his earlier position that he stands ready to meet his North Korean counterparts “anywhere, at any time.”

For months, the US has repeatedly called for dialogue with the North and held a series of consultations with the two Asian allies, but the North largely has remained unresponsive, including to Seoul’s offer of humanitarian assistance.

North Korea watchers say mere words are not enough to get Pyongyang’s attention. If the Biden administration is serious about inducing Pyongyang to return to talks, they say, it needs to lift sanctions and stop the US-South Korea joint military exercises.

“North Korea has long said that it will not return to talks until the US drops its ‘hostile’ policy toward Pyongyang, that is to cease joint military drills,” said Cheong Seong-chang, director of the Center for North Korean Studies at the Sejong Institute. “Pyongyang will not return to talks unless Washington is willing to make a concession in this regard or is ready to put this on the negotiating table.”

With the US and North Korea each unwilling to give the other what it wants, Cheong said, it is difficult to expect a breakthrough in the stalled talks.

Despite the lack of progress in the deadlocked nuclear diplomacy with Pyongyang, analysts say Washington will continue to use the trilateral mechanism with Seoul and Tokyo to tackle the North Korean problem.

“Through frequent trilateral sessions, the Biden administration seeks not only to solve North Korea’s nuclear issue, but also to hold China in check,” said Park Won-gon, a professor of North Korean Studies at Ewha Womans University.

The Biden administration has put trilateral ties with Seoul and Tokyo at the center of its Asia policy, as it believes a security coalition of like-minded allies is key to tackling mounting challenges in the region, such as containing China’s aggression and North Korea’s nuclear ambitions.

“Trilateral cooperation is also essential for the defense of a rules-based order in Asia, in light of long-term challenges posed by China,” said Leif-Eric Easley, a professor of international studies at Ewha Womans University. “While Pyongyang rejects diplomacy and Beijing remains uncooperative, Washington, Seoul and Tokyo can work together to incentivize humanitarian engagement and deter military escalation.”

Since the Biden administration took office, Washington has initiated a series of three-way talks, something that rarely happened during the previous Trump era.

In April, top security advisers from the three countries met in Washington to keep up pressure on North Korea to give up its nuclear and ballistic missile programs.

The three countries’ foreign ministers met on the sidelines of the G-7 summit in London in May and pledged to continue close cooperation in dealing with the North.