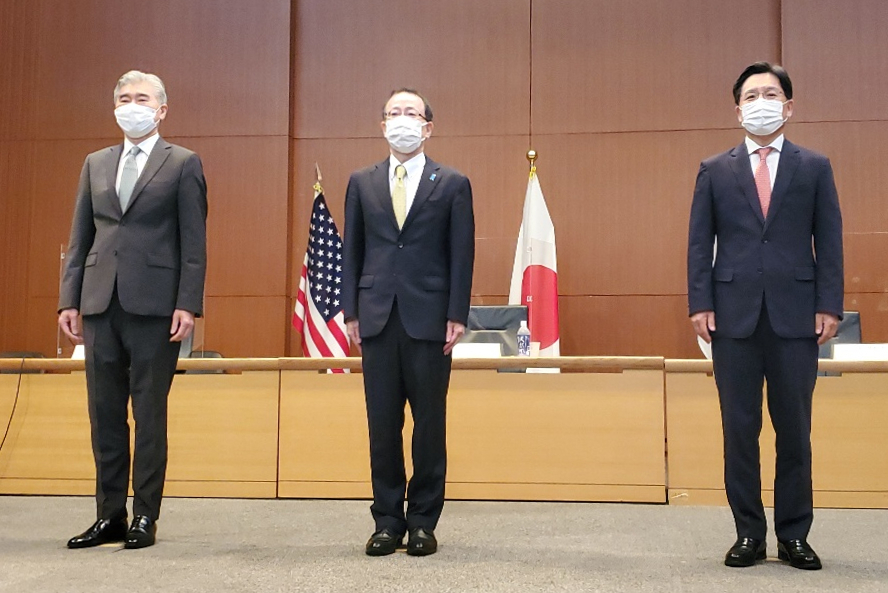 South Korea's chief nuclear envoy Noh Kyu-duk (R) poses with his US and Japanese counterparts, Sung Kim (L) and Takehiro Funakoshi, before their talks in Tokyo on Tuesday. (Yonhap)
The United States is prepared to work with North Korea to address its humanitarian concerns "regardless of progress on denuclearization," Washington's point man on Pyongyang said Tuesday.

Ambassador Sung Kim made the remarks after holding three-way talks with his South Korean and Japanese counterparts, Noh Kyu-duk and Takehiro Funakoshi, respectively, in Tokyo to discuss humanitarian aid and other incentives to resume dialogue with the North.

The talks came amid renewed security concerns over Pyongyang's weekend test-firings of long-range cruise missiles and signs of its reactivation of a plutonium-producing nuclear reactor.

"We are prepared to work cooperatively with the DPRK to address areas of humanitarian concerns regardless of progress on denuclearization," Kim told reporters after the trilateral talks and a bilateral meeting with Noh.

"The United States supports the provision of humanitarian aid, consistent with international standards for access and monitoring to the most vulnerable North Koreans," he added.

In recent months, Seoul and Washington have been thrashing out how to reengage with Pyongyang through humanitarian cooperation in such areas as public health, antivirus quarantines, sanitation and clean water.

But questions linger over whether the North would shift to dialogue given its avowed calls for self-reliance to overcome its economic hardships that have deepened under global sanctions and pandemic-driven border closures.

Kim also repeated the US' offer to meet with the North "without preconditions," though he reiterated Washington's "responsibility" to implement the UN Security Council resolutions on the North and its dedication to advocating for North Koreans' human rights.

"To explore the potential for the diplomacy, the US continues to reach out to Pyongyang to restart dialogue," he said. "Our intent is clear: We harbor no hostile intent towards DPRK, and we're open to meeting with them without preconditions."

At the start of the trilateral meeting, Kim stressed America's "strong" security commitment to South Korea, apparently mindful about the latest flare-up of tensions caused by the North's recent cruise missile tests.

"Our commitment to the security of Japan and ROK is strong," he said, referring to South Korea's official name, the Republic of Korea. "The recent developments in DPRK are a reminder of the importance of close communication and cooperation between the allies."

In recent months, Seoul has been revving up diplomacy to reengage with Pyongyang, seeking to tamp down lingering skepticism over a peace drive overshadowed by the reclusive state's continued pursuit of nuclear and missile programs.

The International Atomic Energy Agency has recently reported indications of the North resuming the operation of a 5-megawatt nuclear reactor at its main Yongbyon complex, including the discharge of cooling water from the reactor.

Noh, Kim and Funakoshi last held their three-way talks in Seoul in June. Last month alone, Noh and Kim held face-to-face talks in Seoul and Washington -- a sign of beefed-up cooperation among the countries over the North Korean issue.

Nuclear talks between Washington and Pyongyang have remained stalled since the Hanoi summit in 2019 between then US President Donald Trump and North Korean leader Kim Jong-un ended without a deal. (Yonhap)