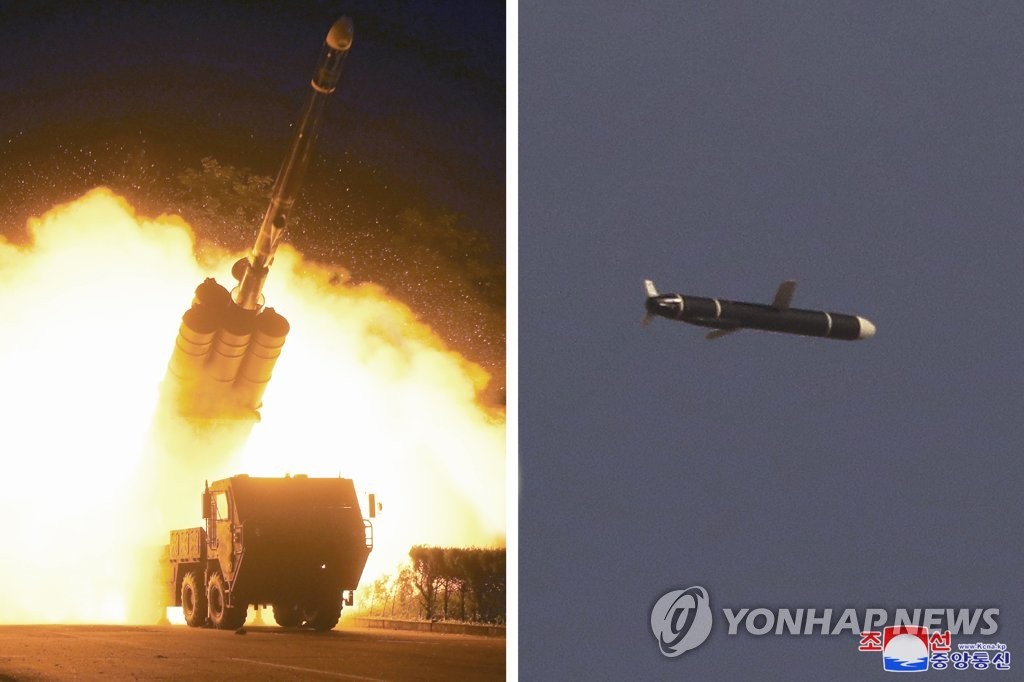 The test-firings, which took place Saturday and Sunday without leader Kim Jong-un in attendance, came right after the North held a scaled-down military parade, and appeared to be intent on demonstrating its military power in a low-level provocation without violating UN sanctions.

The North is banned from using ballistic technology under multiple UN Security Council resolutions. Cruise missiles, however, are not subject to the sanctions as they are considered less of a threat than ballistic missiles.

The missiles "traveled for 7,580 seconds along an oval and pattern-8 flight orbits in the air above the territorial land and waters" in North Korea and "hit targets 1,500 km away," the North's official Korean Central News Agency (KCNA) said.

The US Indo-Pacific Command said the latest test poses threats to the region and beyond.

"We are aware of reports of DPRK cruise missile launches. We will continue to monitor the situation and are consulting closely with our allies and partners," the command said in a release. DPRK stands for the North's official name, the Democratic People's Republic of Korea.

"This activity highlights DPRK's continuing focus on developing its military program and the threats that poses to its neighbors and the international community. The US commitment to the defense of the Republic of Korea and Japan remains ironclad," it added.

South Korea's Joint Chiefs of Staff (JCS) said that an in-depth analysis is under way in close cooperation with US intelligence authorities but refused to confirm details, including where the test was conducted and if they detected the launches in advance.

The South Korean military has disclosed information on North Korea's test-firings of ballistic missiles almost on a real-time basis, but not for cruise missile tests.

Ballistic missiles have a much longer range and move faster than cruise missiles of the same size. But cruise missiles are still threatening as they fly in a relatively straight line and at low altitudes, making them harder to detect. Cruise missiles can also carry nuclear warheads, according to the experts.

The latest test-firings came after the North held a scaled-down military parade at midnight Thursday to mark the 73rd state founding anniversary.

The North paraded mostly paramilitary troops, fire engines and artillery-carrying tractors rather than intercontinental ballistic missiles and other strategic weapons. The event appeared to be aimed at consolidating internal solidarity amid challenges from the coronavirus pandemic and global sanctions on its economy.

The test-firings also came after the North warned of "a serious security crisis" in protest against the major combined exercise between South Korea and the US last month. Many have expected the North to carry out major weapons tests or to undertake provocations.

Pak Jong-chon, member of the Presidium of the politburo of the ruling Workers' Party, watched the latest test-firings, along with other senior officials, the KCNA said. Leader Kim did not attend the tests.

"He stressed the need for the field of the national defense science to go all out to increase the defense capabilities, the war deterrence of the country and keep making achievements in meeting the grand and long-term targets of securing war deterrence," Pak said, according to the KCNA.

Experts said that North Korea appears to have conducted the test-firings in a way that demonstrates its military power, but by using cruise missiles, not ballistic missiles, it avoided provoking the US too much.

They still worried that the North could continue conducting such tests going forward and seek to make those missiles smaller and possibly adaptable to submarines down the line.

"Given that the missile development was launched two years ago as part of the five-year plan, the project appears to have started after mid-2019," said Hong Min, a senior researcher at the Korea Institute for National Unification, a state-run think tank.

"The North could continue such tests so as to make them smaller as part of the five-year plan, and there is also a possibility that the missiles could be developed to be able to be launched from submarines," he added.

The latest firing marks the third known major missile test by the communist country so far this year.

On March 21, the North fired two cruise missiles off the west coast, according to the JCS. Four days later, it fired off two ballistic missiles into the East Sea, believed to be an upgraded version of its KN-23 Iskander-type missile.