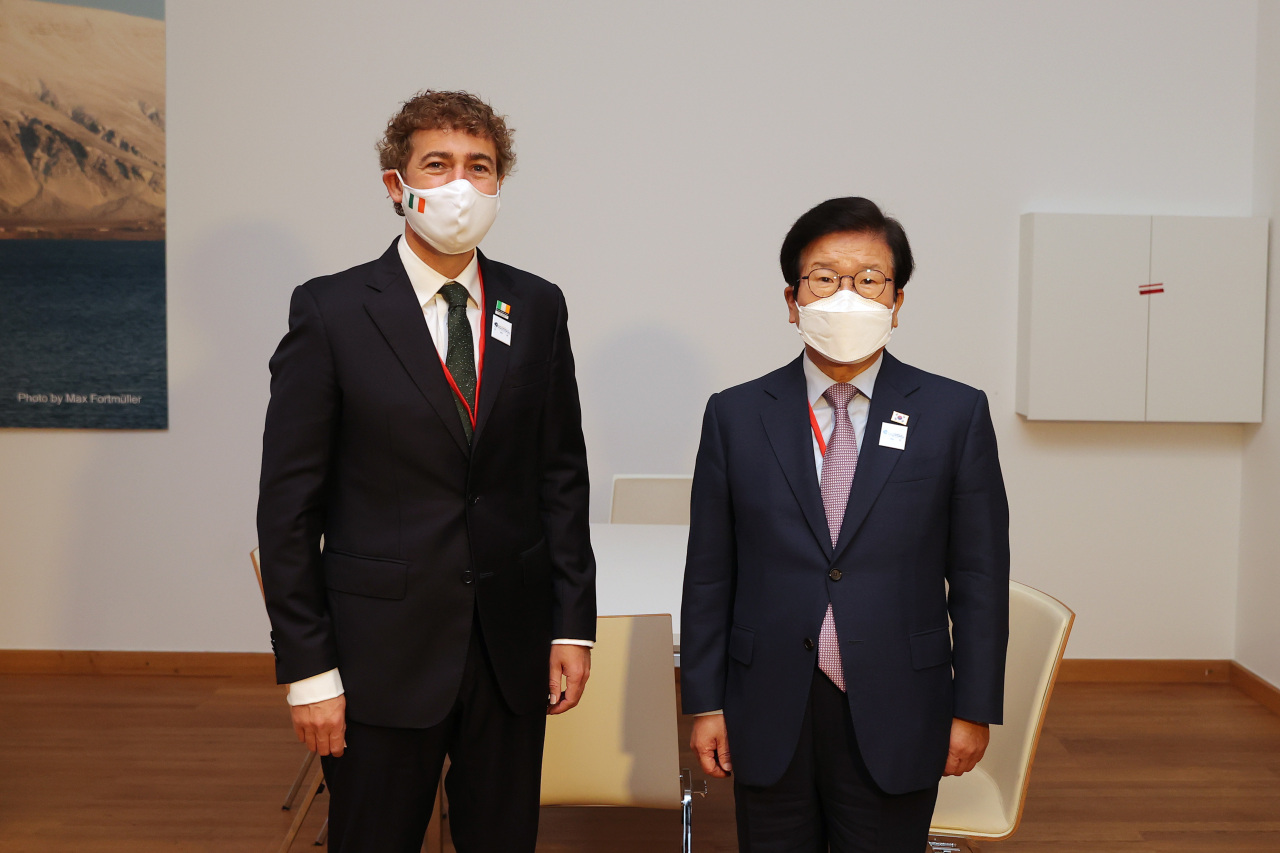 During the two-day conference, which began Tuesday, he met with 24 parliamentary leaders and with the secretary-general of the Inter-Parliamentary Union and expanded the horizons of South Korea’s parliamentary diplomacy, according to a statement released by his office.

On Wednesday Park met with Mark Daly, chair of the Senate of Ireland, to discuss bilateral cooperation between the two countries and humanitarian assistance for North Korea.

Park expressed hope that “North Korea engages with the international community and enhances the quality of life for its people” so that it can be recognized as a country that seeks peace. He also stressed South Korea’s firm stance that humanitarian assistance, including food aid, should be maintained regardless of the political situation.

Touching upon the Irish situation, Daly showed an interest in learning about South Korea’s experience of dealing with national division.

Park replied that it would be beneficial for the South Korean and Irish governments to share their experiences.

The speaker also met with Speaker Om Birla of the Indian Lok Sabha to discuss boosting cooperation in the defense and software industries.

Birla expressed his desire to promote interparliamentary exchanges for the sake of democracy, saying there were many possibilities for cooperation. Recognizing South Korea’s renowned high-tech prowess, the Indian speaker also expressed hope for greater exchanges for technology professionals.

Birla mentioned his hope that Park would visit a new Indian parliament after the building’s completion in 2022.

Given India’s well-known strengths in software and information and communication technology, the two countries can build a cooperative partnership in ICT, artificial intelligence and big data, Park said. He suggested that the two parliaments play essential roles in making this happen.

Park also met with the two presiding officers of the Belgian Parliament -- Senate President Stephanie D’Hose and Chamber of Representatives President Eliane Tillieux. Belgium is the first country to have women as speakers in both chambers.

Park said he was “happy to note Korea’s growing friendly ties with Belgium, a traditional partner which took part in the Korean War, in various areas.”

He said that “economic exchanges, trade and investment remain steady despite the pandemic,” demonstrating the “strength of the bilateral relations between the two countries.” He said there was enormous potential for cooperation between the two countries, considering their many commonalities in terms of openness and their highly skilled workforces. He proposed to strengthen practical cooperation in this regard.

In a meeting with Park, Alen Simonyan, president of the Armenian National Assembly, thanked Park for South Korea’s support for the installation of an electronic voting system in the Armenian parliament.

Park said he appreciated the quadrupled growth in bilateral trade volume over the past five years, but said the bilateral ties between South Korea and Armenia had not yet reached their potential. He expressed his desire to bolster exchanges and cooperation going forward.

He also expressed his hope that Armenia would soon complete its domestic procedures to sign the agreement on economic, scientific and technological cooperation with South Korea.

During the closing session of the fifth World Conference of Speakers of Parliament, Park met on the sidelines with President Esperanca Bias of the Assembly of Mozambique, Speaker Hanafi Ali Gibali of the House of Representatives of Egypt and Deputy Speaker Ana Maria Mari Machado of the National Assembly of Cuba. They discussed ways to enhance interparliamentary exchanges and cooperation.