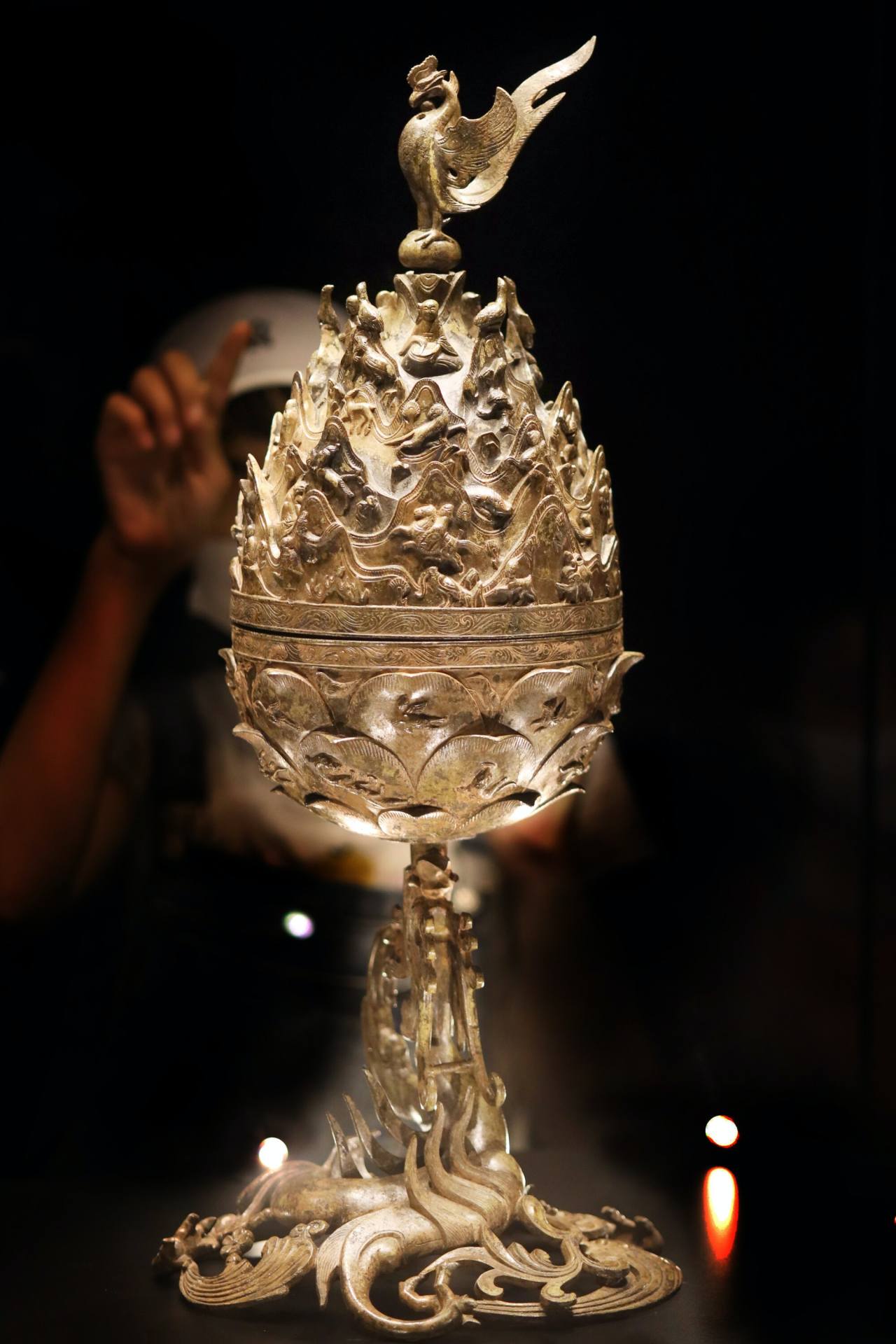 A Phoenix sits on top of the Gilt-bronze Incense Burner of Baekje, Korea’s National Treasure No. 287, which features the world of enlightenment on a lotus flower base blooming from the mouth of a five-legged dragon. The incense burner clearly features animals from distant places, not indigenous to Korea, an example of the far reach of the Baekje Empire’s maritime presence and the empire’s 22 “damro” vassal states.Photo © 2020 Hyungwon Kang
During Korea‘s tumultuous history, the Baekje Empire had a significant presence in East Asia for about 700 years starting about two thousand years ago.

Korean civilization which is one of the world’s oldest continuous civilizations, had profound spiritual and philosophical foundations in Dohak, or Taoism, and Buddhism during the Baekje period.

The Gilt-bronze Incense Burner of Baekje, which was excavated at an ancient temple site in Buyeo County in South Chungcheong Province in 1993, is considered the epitome of the Baekje Empire‘s metalcraft and artistry.

The Incense Burner, Korea’s National Treasure No. 287, offers a fascinating window into the world of Baekje people‘s spirituality showing aspects of Buddhism and Dohak beliefs. 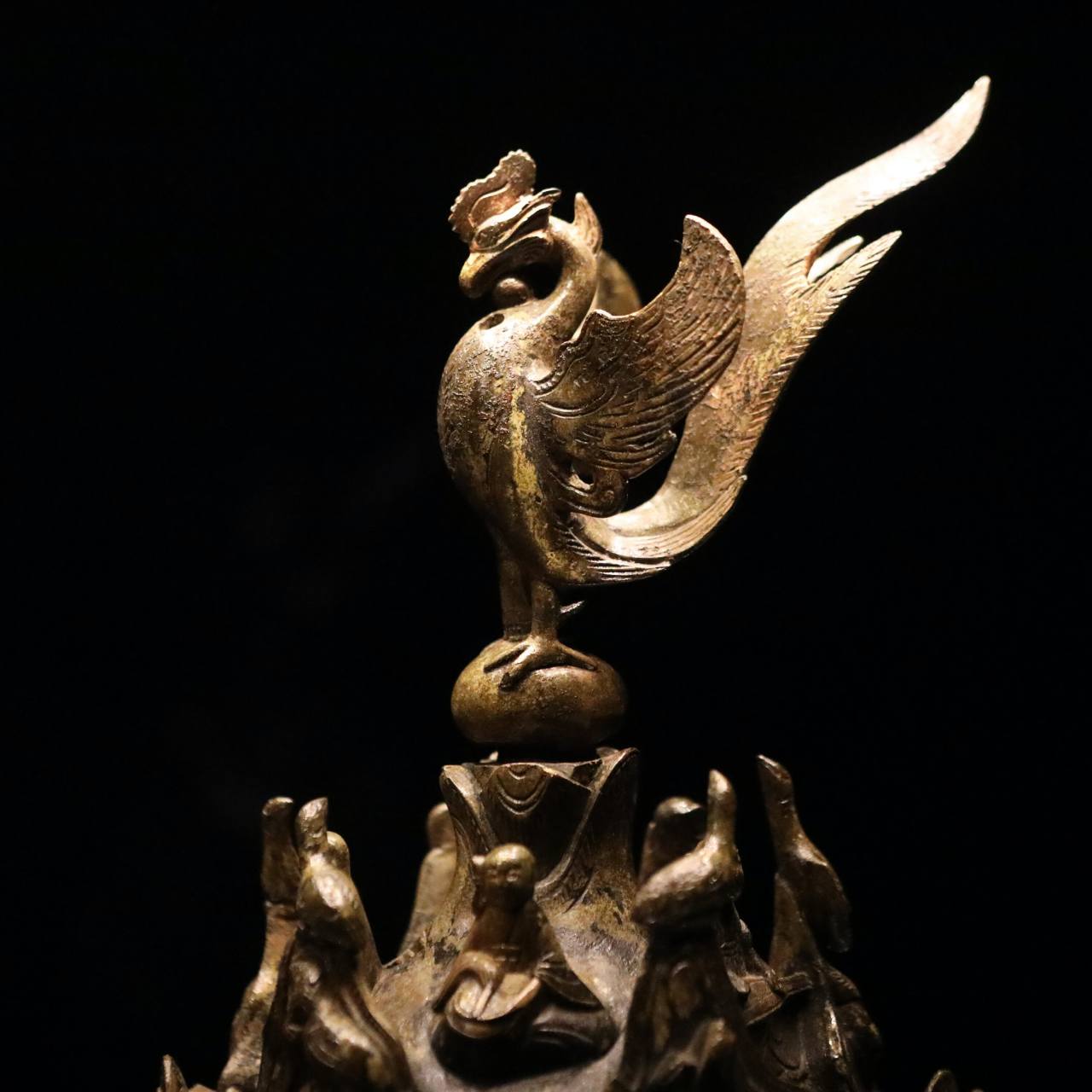 The water, symbolizing life, is expressed as a dragon, and the lotus flower base is blooming from the mouth of a dragon with five legs, which appear like splashing waves.

“The dragon in our culture is an animal that symbolizes water,” said art historian Han Jeoung-ho of the Dongguk University.

Incredibly, the Incense Burner clearly features a person riding an elephant. In addition, other animals like a monkey from distant Southeast Asian places, not indigenous to Korea, are sculpted on the incense burner. 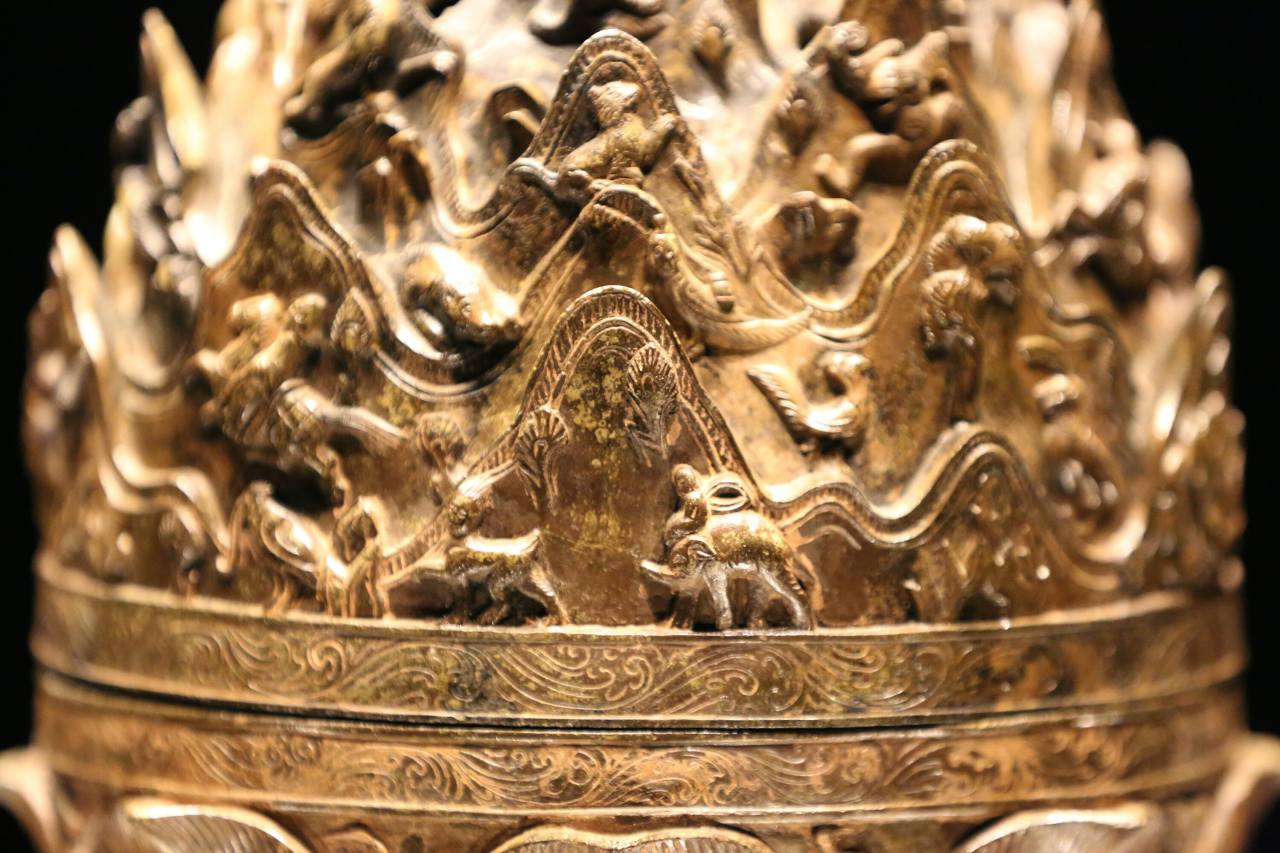 The Gilt-bronze Incense Burner of Baekje, Korea’s National Treasure No. 287, stands 61.8 centimeters tall and weighs 11.8 kilograms. It clearly features animals from distant Southeast Asian places, such as an elephant, which show the far reaches of the Baekje Empire’s maritime presence and empire’s 22 “damro” vassal states.
During the turbulent years in East Asia’s mainland, from the Han Dynasty (206 BC-AD 220), chaotic Six Dynasties Period (220-589), Sui (581-618) to Tang Dynasty (618-906), there was the Baekje Empire, which ruled continuously from 18 BC to AD 660, for 678 years.

Baekje‘s vassal states surrounding the Yellow Sea (West Sea) and the rest of Asian kingdoms along the continent’s coasts brought rich and colorful culture to fruition for the naval empire.

When Emperor Muryeong (462-523) of Baekje died, his coffin was made with Japanese umbrella-pine lumber, which does not grow in Korea.

Emperor Muryeong‘s burial chamber was made with bricks, in typical Liang Dynasty (502-557) burial style, instead of the traditional stone-wall burial chambers typical of Baekje, Goguryeo, Buyeo, Silla and the Gaya confederacy.

The Liang dynasty’s territory during the Southern and Northern Dynasties period (420–589) included the coastal areas south of the Shandong Peninsula, the cradle of the Dongyi people, whose ethnic and cultural ancestry ties to modern Koreans are well known.

Baekje people left a valuable history on a burial tablet, which was left inside the tomb of Emperor Muryeong. They called Muryeong‘s death a “Bung” -- a clear reference to the passing of an emperor.

In the year 490, hundreds of thousands of Wei cavalry attacked Baekje. King Dongseong the Great of Baekje defended Baekje with leaders of his vassal states inflicting considerable damage to the Wei. As an emperor, Dongseong the Great promoted several of his generals to various vassal states in modern day Hebei province near Beijing, Shandong province, and Jiangsu province north of Shanghai, all along the Yellow Sea.

The national identity of Baekje, which was inherited from Buyeo, was based on the indigenous population, and the empire’s name was even changed to “Southern Buyeo” at one point.

In the Samhan Period of the Byeonhan, Jinhan, and Mahan confederacies during the first century BC, one of the original tribal states named “Baekje” was among the 54 nations in Mahan, whose name some scholars believe Baekje Empire adopted later.

More than a thousand years after the Baekje Empire was destroyed by the Silla-Tang alliance, Baekje‘s cultural heritage remains deep in our culture and in neighboring states.

According to Japanese historical records, the island nation’s name of Yamato became Nippon (Japan), which means “the land where the sun rises,” a perspective from the continent looking toward the Japanese islands.

Between the late 7th century and 701, some 1.5 million refugees came to Japan after the fall of Baekje and Goguryeo, according to Japanese historical records.

Baekje, Gaya and Goguryeo migration also show up in dogs. There are many northern spitz breed dogs in Japan, which not only look similar to native Korean dogs such as Jindo and Pungsan, but DNA comparisons confirm a close match with Korean dogs. 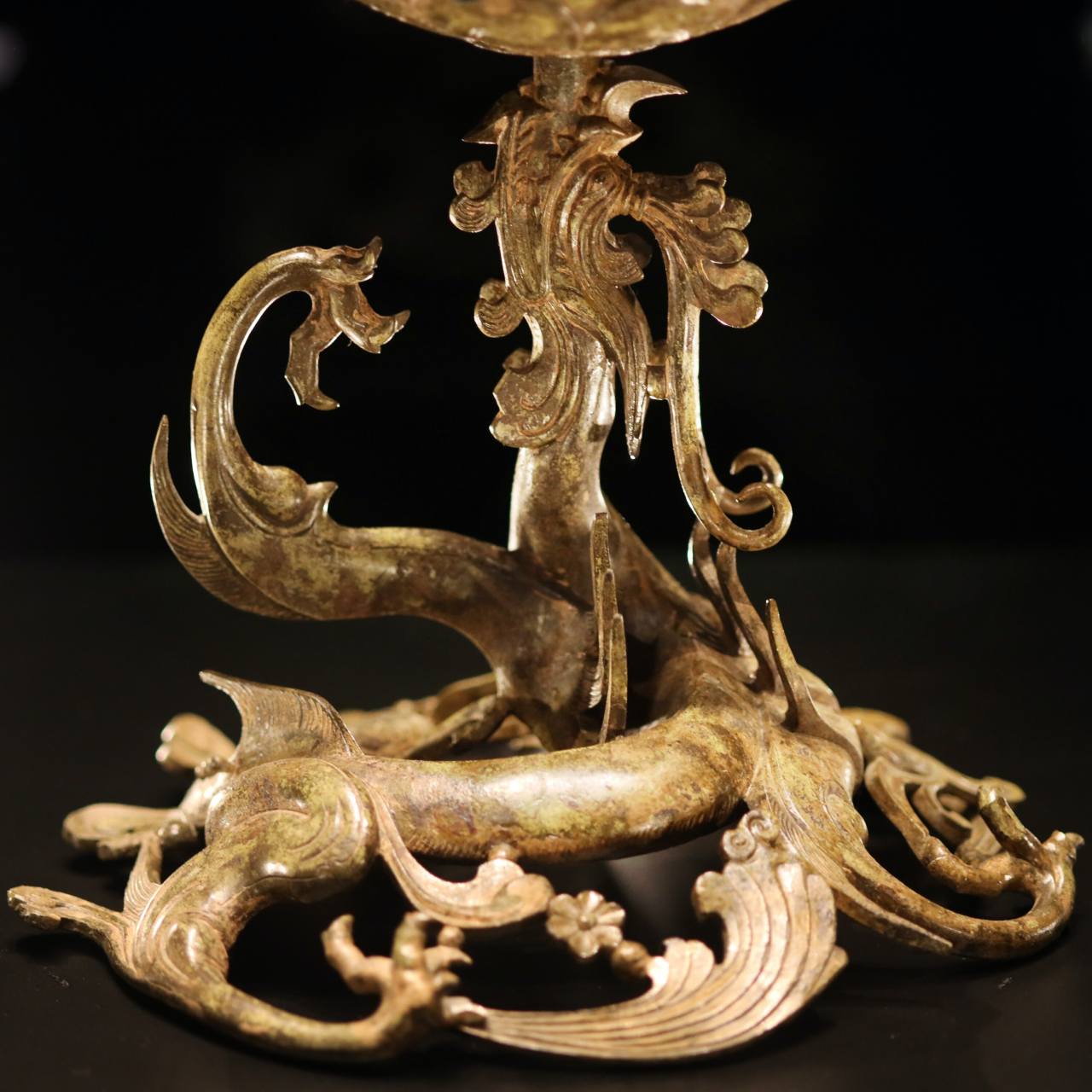 The water, symbolizing life, is expressed as a dragon on the base of the Gilt-bronze Incense Burner of Baekje. The lotus flower base blooms from the mouth of the five-legged dragon, whose legs appear like splashing waves.Photo © 2020 Hyungwon Kang
Japan’s Emperor Akihito, at his 68th birthday press conference, announced that “he felt personal attachment to Korea” because of the blood ties of his ancestors. “I, for my part, feel a certain kinship with Korea, given the fact that it is recorded in the Chronicles of Japan that the mother of Emperor Kammu was of the line of King Muryeong of Baekje.”

The Baekje Empire, which later called itself Nambuyeo (Southern Buyeo), was a formidable force which had 22 Damro, or vassal states, according to written historical records.

The original Baekje Gilt-bronze Incense Burner, which stands 61.8 centimeters tall and weighs 11.8 kilograms, is on display at the Buyeo National Museum. It is a true masterpiece of the artistry of the Baekje people.