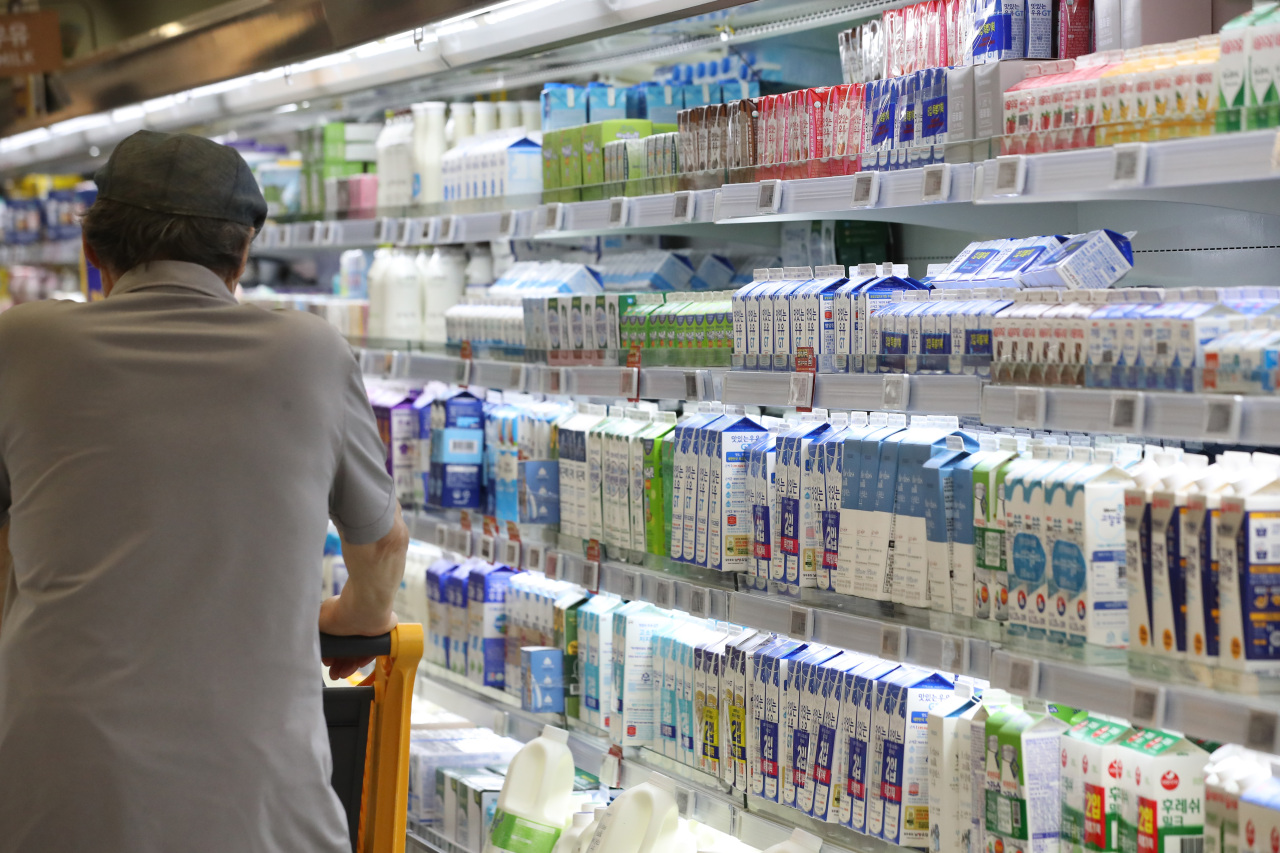 Containers of milk are being sold on refrigerator shelves a supermarket in Seoul. (Yonhap)
Retail milk prices are expected to rise soon following an increase in the price of raw milk last month.

After the decision by the Korea Dairy Committee to raise the price of raw milk from Aug. 1, major milk and dairy product suppliers are mulling when to reflect this in their retail prices.

“When to increase the prices or by how much are still under discussion,” one official at Seoul Dairy Cooperative, the largest milk producer in South Korea, told The Korea Herald.

“With raw milk having risen in price by 21 won to 947 won per liter, there is a cost burden on our shoulders.”

Maeil Dairies, which has not changed its milk prices since 2013, is also poised to take the same path.

“It has been a while (since the last price increase). There are other factors such as inflation and labor costs as well. We are looking at the situation,” one official at the company said.

Consumer prices have risen steadily in the country, increasing over 2 percent for the fifth straight month in August due to rising prices of farm and oil products, according to the latest data from Statistics Korea.

With jitters over an economic recovery from the pandemic, the rise in milk prices has been also met with fears over a domino effect it could trigger on other dairy products such as cheese and butter as well as bread.

And adding to the pressure is the fact that milk is already more expensive here than it is other countries.

“The competitiveness of South Korean raw milk has dwindled which is the result of its price increase rate of 72.2 percent (over the last 20 years), far steeper than 33.8 percent in Japan, 19.6 percent in Europe and 11.8 percent in the US,” Park Beom-soo, director of the Livestock Policy Bureau at the Ministry of Agriculture, Food and Rural Affairs, said in a recent meeting with industry experts and government officials.

During the 20-year period, Koreans’ consumption of dairy products rose by 46.7 percent.

Imports grew by 272.7 percent, while domestic production declined by some 10.7 percent, the data from the Agriculture Ministry showed.

“Given the trend, it is hard to expect sustainable development and the current system is in urgent need of reform,” Park said.


Why are milk prices rising?

The system was introduced in 2013 to protect dairy farmers and make the price negotiation process smooth by setting the price based on factors such as production costs and consumer price inflation, rather than demand.

The policy, however, has been blamed for putting the burden on milk companies and consumers. The criticism goes that, under the price sliding system, the rule of demand does not apply and it can lead to a price rise despite a drop in demand.

But when feed prices rise, the impact on farmers cannot be overlooked, according to Yeo Joon-mo, a professor at the department of dairy science the Korea National College of Agriculture of Fisheries. 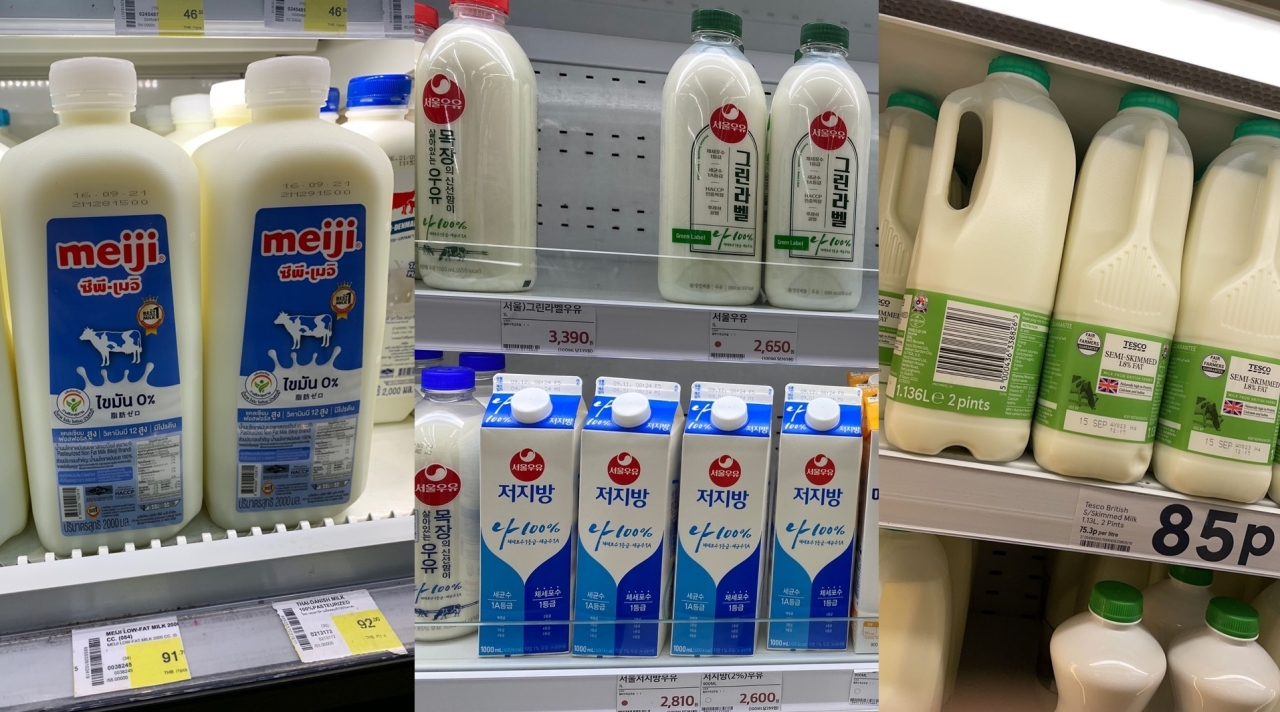 One liter of milk ranges between 2,600 won and 2,810 won at a supermarket in Seoul (left) while 2-liter cartons of milk are being sold at 91 bhat at a supermarket in Bangkok and two-pint bottles of milk at 85 pence at a supermarket in London. (Yim Hyun-su/The Korea Herald)
“The main factor driving up milk prices are production costs such as investment costs. And the price of feed plays a big role which means when feed prices increase even slightly, it leads to a significant loss in profit for farmers,” the professor said.

“For instance, if the feed price goes up by 50 won per kilogram, it could cost farmers an additional cost of 10 million won per year.”


Why is milk so expensive in Korea?


According to Numbeo, a crowd-sourced database of consumer prices, South Korea is among the top 10 countries in terms of milk price.

Experts say the high price of milk in Korea is the result of its lack of land for dairy farming.

“It is true that South Korea, with less agricultural land and production volume, has a less ideal environment (for the dairy industry) than major developed countries. By importing cattle feed, both grain and grass, it is inevitable that production costs are higher here,” one official at the Agriculture Ministry said.

“Milk is slightly more expensive here in Korea than Japan. But even in Japan, a significant amount of cattle feed relies on imports, driving up the production cost,” one industry expert said.

Rising milk prices have been bad news for the government which is fighting inflation.

Last month, the government made a last-ditch effort to delay the price hike in raw milk, but to no avail.

It is now planning to introduce a proposal later this year to reduce production costs and change the current pricing system to reflect the market situation, one official at the Agriculture Ministry said.

In the same month, the government also announced plans to import some 200 million eggs between August and September to help stabilize rising egg prices.