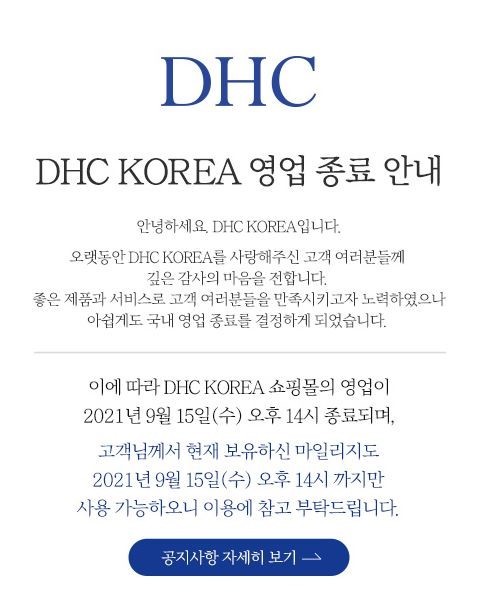 A statement was issued on DHC Korea's website on Thursday. (DHC Korea)
Japanese cosmetics firm DHC announced on Thursday that it was withdrawing its business from South Korea later this month amid growing criticism over the company’s racially discriminatory stance against Koreans.

In a statement on its website, DHC Korea said it had strived to satisfy customers with great service and products but “regrettably decided to end its operation in South Korea.”

The closure of the business is scheduled for Sept. 15, nearly 20 years after it entered the market here.

Though the company has not specified the reasons for the pullout, it has faced a nationwide boycott in recent years.

In 2019, DHC was dropped from major beauty stores in the country such as Olive Young and Lalavla after the company’s YouTube arm, DHC Television, aired comments suggesting that Japanese people introduced Hangeul, the Korean writing system, to Koreans. One panelist also said Korea was a “country that gets hot and cold easily.” The remarks came soon after a trade dispute between the two countries gave rise to a boycott of Japanese goods here.

On Wednesday, DHC Television was ordered by a Japanese court to pay 5.5 million yen ($49,984) in damages to Shin sug-ok, a Zainichi Korean human rights activist, for defamation after accusing her of orchestrating violent acts of opposition against the US military presence in Okinawa without presenting evidence. The Zainichi people are ethnic Koreans living in Japan.

The ruling marks the latest in a series of racism scandals surrounding DHC.

In November last year, DHC chairman Yoshiaki Yoshida used the word “chon” -- a racial slur for Koreans in Japan -- in a column criticizing the company’s rival Suntory and accused the firm of casting too many Korean Japanese models.

Earlier this year, he complained that multiple Japanese media outlets had rejected a TV commercial and a newspaper advertisement from the company. The proposed ad featured the names of ethnic Korean celebrities who “deserve to be despised for the benefit of Japan,” according to the post.

Yoshida also disparaged ethnic Koreans in an online post on the company’s website, saying other Japanese people could spot them by looking for features such as “small eyes,” “protruding chins” and a flat area on the back of the head.