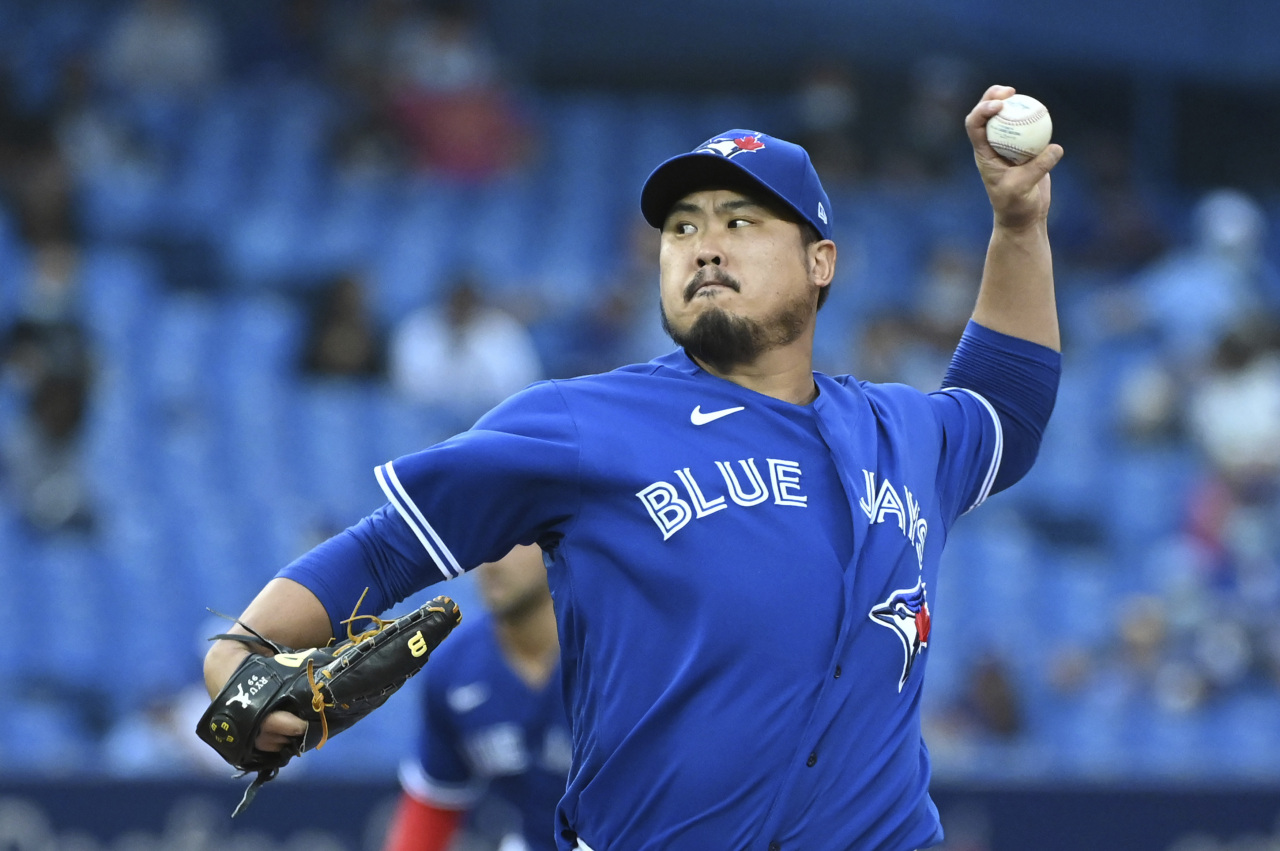 n this USA Today Sports photo via Reuters, Ryu Hyun-jin of the Toronto Blue Jays pitches against the Baltimore Orioles during the top of the first inning of a Major League Baseball regular season game at Rogers Centre in Toronto on Tuesday. (Yonhap)
It's a funny game, this thing called baseball. A pitcher can feel like he has the stuff to shut down the opponents, but in the blink of an eye, a lead can evaporate and the pitcher can end up with a loss.

Up against the Baltimore Orioles, the worst team in the majors, Toronto Blue Jays' starter Ryu Hyun-jin had confidence in all of his pitches. And he looked the part through two outs in the sixth inning at Rogers Centre in Toronto on Tuesday (local time), as he had held the Orioles without a hit.

But then the bottom fell out in a hurry. Ryu gave up, in succession, a double, a single, a walk and another double. The Orioles turned a 1-0 deficit into a 3-1 lead and chased Ryu from the game in the process.

"I have to be careful not to give up extra-base hits and create traffic on base paths," Ryu said in his postgame Zoom session. "I haven't been able to do that recently. I've made life tough on myself because I've given up multiple runs in one inning."

This was Ryu's sixth start in August, and he closed the book on the month with 23 earned runs in 33 1/3 innings.

Ryu suffered through one of his worst starts of the year last week against the Chicago White Sox, getting touched for seven runs on seven hits, including three dingers, in 3 2/3 innings.

Ryu said his pitches "had more life" Tuesday than his last start. After walking two Orioles in the first inning and needing 28 pitches to get out of that frame unscathed, Ryu quickly found his footing. Following a two-out walk in the first, Ryu retired 15 straight batters. He only threw 13 pitches combined for the third and fourth innings.

"Early on, I tried to be too perfect with my command, and that drove up my pitch count," Ryu said. "Once I realized I had some zips to my pitches, I tried to attack the hitters early in the count, and I was able to keep my pitch count low afterward."

August was by far Ryu's worst month of the season, and now the left-hander is ready for a clean slate in September, the final month of the regular season with the Blue Jays trying to stay alive in the postseason hunt.

"Physically and mentally, I feel good. I just have to make sure I do my job as a starting pitcher," Ryu said. "That means getting ready for each and every start on the day I am supposed to pitch."

Ryu had a no-hitter through two outs in the sixth. There have already been a record-tying eight no-hitters this season.

No South Korean pitcher has thrown a no-no in the majors. Asked if he was conscious of the possibility of a no-hitter, Ryu shook his head wearing a wry smile. (Yonhap)