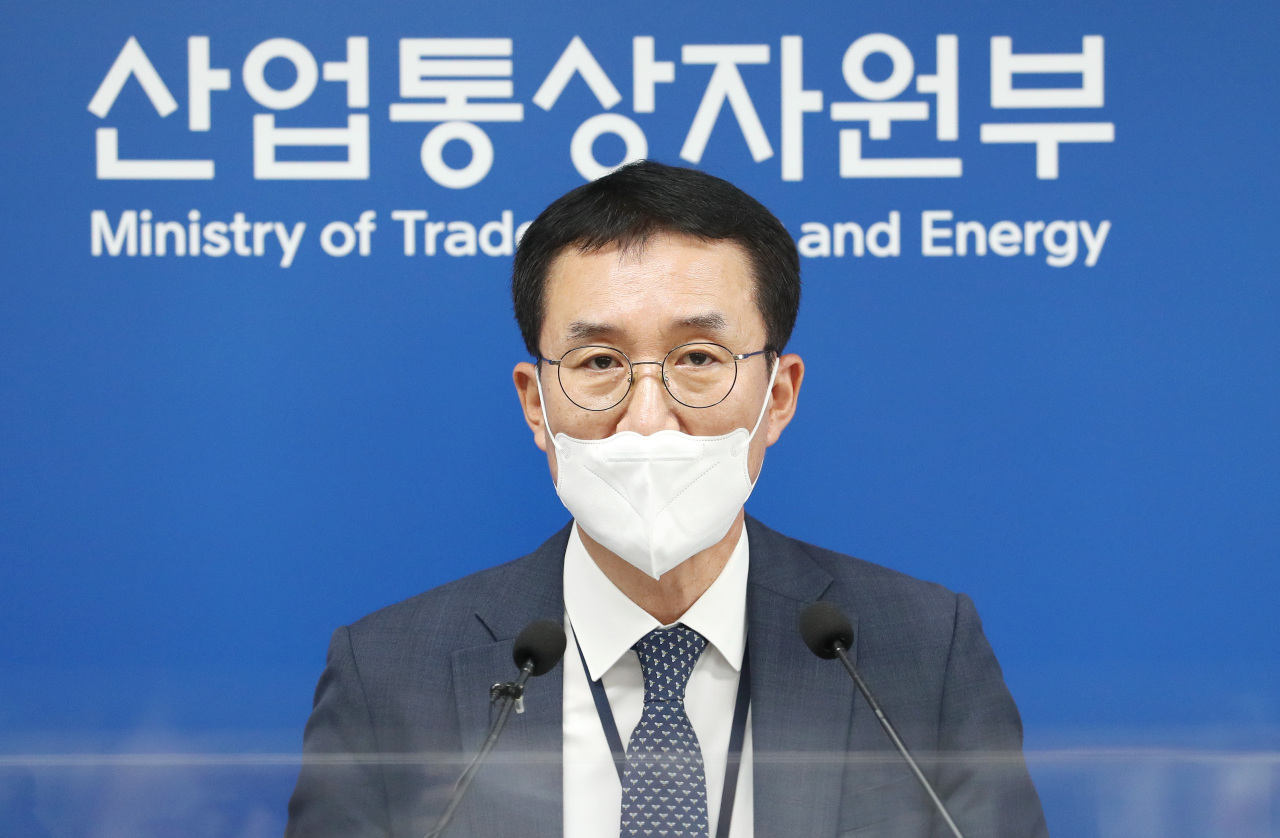 An official from the Ministry of Trade, Industry and Energy announces August export figures to reporters at the administrative office in Sejeong on Wednesday. (Yonhap)
South Korea continued to report record-shattering export results in August, data showed Wednesday, reinforcing an economic recovery almost single-handedly driven by overseas sales as domestic spending remains weighed down by the pandemic.

According to the Ministry of Trade, Industry and Energy, outbound shipments jumped 34.9 percent from a year earlier to $53.2 billion last month, the best performance that the Asia’s fourth-largest economy has ever pulled off in August.

The previous record was set in the August of 2018, when the tally stood at 51.1 billion.

Imports also soared by 44 percent on-year to $51.6 billion, resulting in a trade surplus of $1.7 billion for the month.

“Although the summer vacation tends to bring down export figures in August, South Korea achieved the highest-ever export figure for the month while maintaining its exports in the $50 billion-range for six consecutive months,” Trade Minister Moon Sung-wook said.

There was an improvement in quality, the minister noted.

“What’s encouraging is that exports are growing evenly across various sectors, rather than increasing on one or two specific items,” he said.

By sector, exports of petroleum products jumped 81.5 percent on-year and reached $5 billion, as oil prices rose and demand for these products grew from a recovery in construction and the automotive industries around the globe.

Outbound shipments of semiconductors, a key export item, grew 43 percent from a year earlier to $11.7 billion, mainly due to increased demand for memory chips for data centers.

Exports of cars increased by 16.9 percent on-year to $3 billion, backed by an overall sales jump in higher-priced SUVs and electric vehicles.

Exports of secondary batteries also grew 10.9 percent and cosmetics by 20.8 percent from the previous year.

Exports to China, Korea’s largest trading partner, rose 26.8 percent on-year. Shipments bound for Europe and the US grew by 41.6 percent and 38.1 percent from a year earlier, respectively.