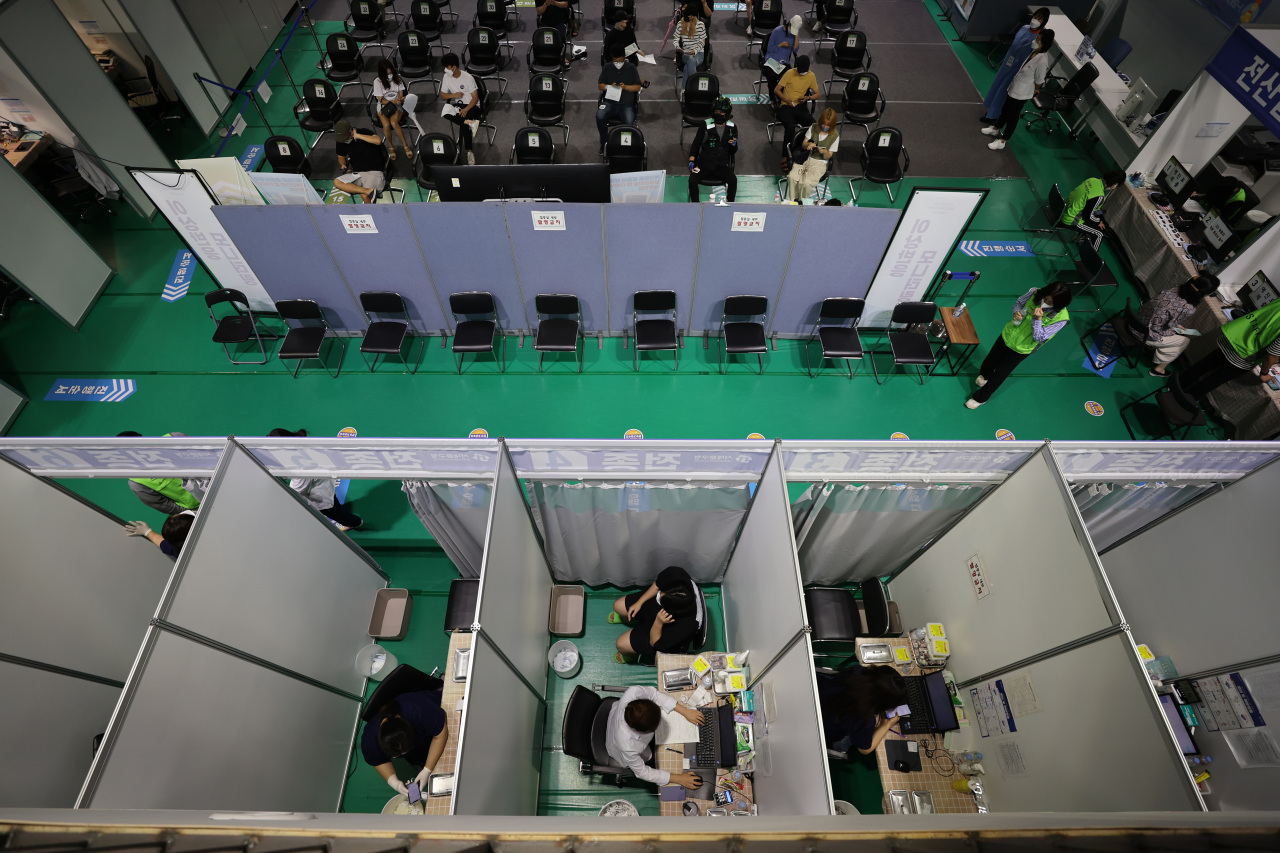 Photo shows the inside of a vaccination clinic in Seodaemun, central Seoul, on the last day of August. (Yonhap)

With fall just around the corner, concerns are once again rising of a possible “twindemic” -- a COVID-19 pandemic coupled with flu endemic -- which never materialized last year.

In Korea and across the Northern Hemisphere, the last flu season, which would have taken off around November and run through spring, was almost non-existent.

Widespread behavioral changes such as crowd avoidance, hand hygiene and masking put in place to keep COVID-19 at bay seem to have stifled other respiratory viruses, too, according to Dr. Chun Byung-chul of the Korean Vaccine Society.

Over the 2020-21 season, the number of influenza-like illness cases peaked at just 3.3 per 1,000 outpatients, compared to the previous year’s peak of 49.8 cases, according to the Korea Disease Control and Prevention Agency’s surveillance.

Chun said the flu’s low profile over the past year and a half meant a larger pool of people who have not been exposed to the infection. “Since fewer people have been infected, there’s probably less herd protection,” he said. Herd immunity against the flu was achieved through a combination of both vaccinations and natural infection.

The government has promised that social distancing and other measures to beat back the spread of COVID-19 would ease gradually after vaccinations pass a certain target later in the fall. As the protective rules ease, flu cases were bound to bounce back, Chun said.

“Staying clear of the flu will be a priority in the upcoming season, as we might be heading into a more severe one,” he said. “Once you are vaccinated against COVID-19, try not to skip your flu shot either.”

According to the central disease control agency guidance, people can receive COVID-19 and flu vaccinations at the same time.

Waiting two weeks until a different vaccination was not a bad idea, Chun said. Children up to 12 years of age and elderly people aged 65 and above were especially vulnerable. September to November is the prime time to get the flu shot.

Infectious disease professor Dr. Kim Woo-joo of Korea University warned that coinfection with the flu and COVID-19 was rare but possible, and urged people to get vaccinated against both regardless of their health status.

Dr. Kim Dong-suk, heading the largest association of general practitioners, said flu vaccines were not only priced higher, they were hard to come by. This year the flu shot makers were charging 17,000 won ($14.70) per prefilled syringe, he said, exceeding the usual cost of around 11,000 won.

“Member doctors and I can’t wrap our heads around why flu shots would be in short supply this time,” he said.

Last year, a temporary shortage occurred after some 1 million doses of flu vaccine were recalled over contamination and heat exposure. But there has been no such known incident with this year’s batch to date.

Primary care physician Dr. Jang Hyun-jae, whose office is in Nowon-gu, northern Seoul, said he was told he would be only getting 60 to 70 percent of the total order he placed. “Usually medical institutions stock up on flu shots around late August, but it seems like there are some issues with distribution,” he said.

A senior official within the Ministry of Drug and Safety said about 8 million flu vaccine doses had been shipped across the country in late August, and that 12 million more doses were set to become available from this month.

The official said local drugmaker SK Bioscience is withdrawing from flu vaccine production this season as final clinical trials for its COVID-19 vaccine candidate are underway. That may be the cause for a shortage being reported at the moment.

Six months into the national program, Korea vaccinated 56 percent of its 51 million people with at least one dose of a COVID-19 vaccine to date, while 29 percent were fully vaccinated. The goal is to give more than 70 percent before Sept. 18, when this year’s Chuseok holiday comes around.

The vaccination program, which currently covers adults aged 18 and older, is being expanded from October to include pregnant women and minors as young as 12.