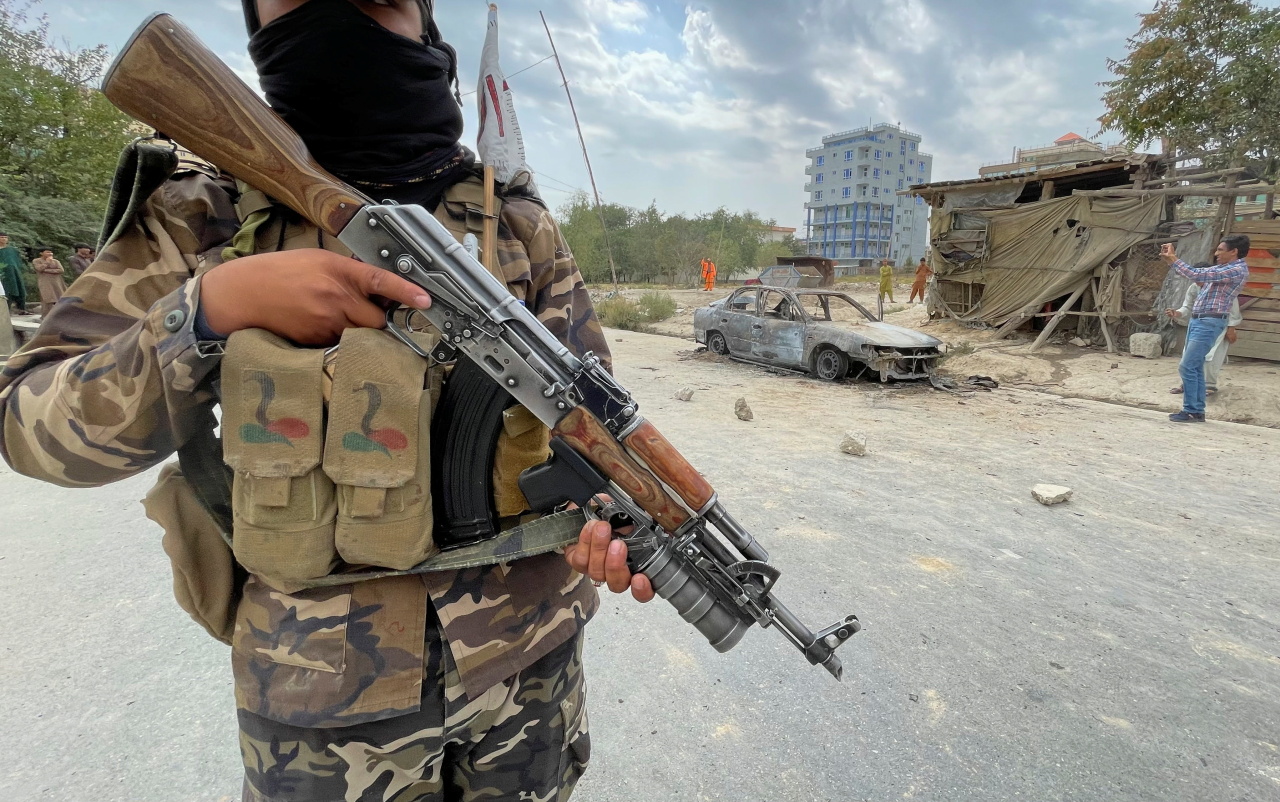 A member of Taliban forces stands guard as Afghan men take pictures of a vehicle from which rockets were fired, in Kabul, Afghanistan Aug. 30. (Reuters-Yonhap)
Rockets were fired at Kabul's airport on Monday where US troops were racing to complete their withdrawal from Afghanistan and evacuate allies under the threat of Islamic State group attacks.

The return of the hardline Islamist Taliban movement, which was toppled in 2001 but took back power a fortnight ago, triggered an exodus of terrified people aboard US-led evacuation flights.

Those flights, which have taken more than 122,000 people out of Kabul airport, will officially end on Tuesday when the last of the thousands of American troops pull out.

US forces are now focused chiefly on flying themselves and American diplomats out safely.

The Islamic State group, rivals of the Taliban, pose the biggest threat to the withdrawal after carrying out a suicide bomb attack at the perimeter of the airport late last week that claimed more than 100 lives, including those of 13 US troops.

Biden has warned more attacks were highly likely and the United States said it carried out an air strike on Sunday night in Kabul on an IS-prepared car bomb.

That was followed on Monday morning by rockets being fired at the airport.

The White House confirmed there had been a rocket attack directed at the airport, but said airlift operations there were "uninterrupted".

"The President... has reconfirmed his order that commanders redouble their efforts to prioritise doing whatever is necessary to protect our forces on the ground," the White House statement said.

An AFP photographer on Monday took images of a destroyed car with a launcher system still visible in the back seat.

A Taliban official at the scene said he believed five rockets had been fired, and all were destroyed by the airport's missile defence systems.

A suspected US drone strike had hit the car, about 2 kilometers from the airport.

While there were no reports of fatalities or airport damage from the rocket attacks, they caused greater anxiety for locals already traumatised by years of war.

"Since the Americans have taken control of the airport, we can't sleep properly," Abdullah, who lives near the airport and gave only one name, told AFP.

"It is either gun firing, rockets, sirens or sounds of huge planes that disturb us. And now that they are being directly targeted, it can put our lives in danger."

The United States said the air strike on Sunday night had eliminated another threat from the Islamic State jihadists.

However, it may have also have killed civilians.

"We are aware of reports of civilian casualties following our strike on a vehicle in Kabul today," Captain Bill Urban, a US Central Command spokesman, said in a statement.

"We would be deeply saddened by any potential loss of innocent life."

They have massacred civilians at mosques, public squares, schools, and even hospitals.

While both IS and the Taliban are hardline Sunni Islamists, they are bitter foes -- with each claiming to be the true flag-bearers of jihad.

Last week's suicide bombing at the airport led to the worst single-day death toll for the US military in Afghanistan since 2011.

The IS threat has forced the US military and the Taliban to co-operate in ensuring security at the airport in a way unthinkable just weeks ago.

The Taliban have already started taking over areas vacated by US forces.

The Taliban have promised a softer brand of rule compared with their first stint in power, which the US military ended because the group gave sanctuary to Al-Qaeda.

But many Afghans fear a repeat of the Taliban's brutal interpretation of Islamic law, as well as violent retribution for working with foreign militaries, Western missions or the previous US-backed government.

Western allies have warned many thousands of at-risk Afghans have not been able to get on the evacuation flights.

On Sunday, the Taliban revealed their supreme leader Hibatullah Akhundzada was in southern Afghanistan and planning to make a public appearance.