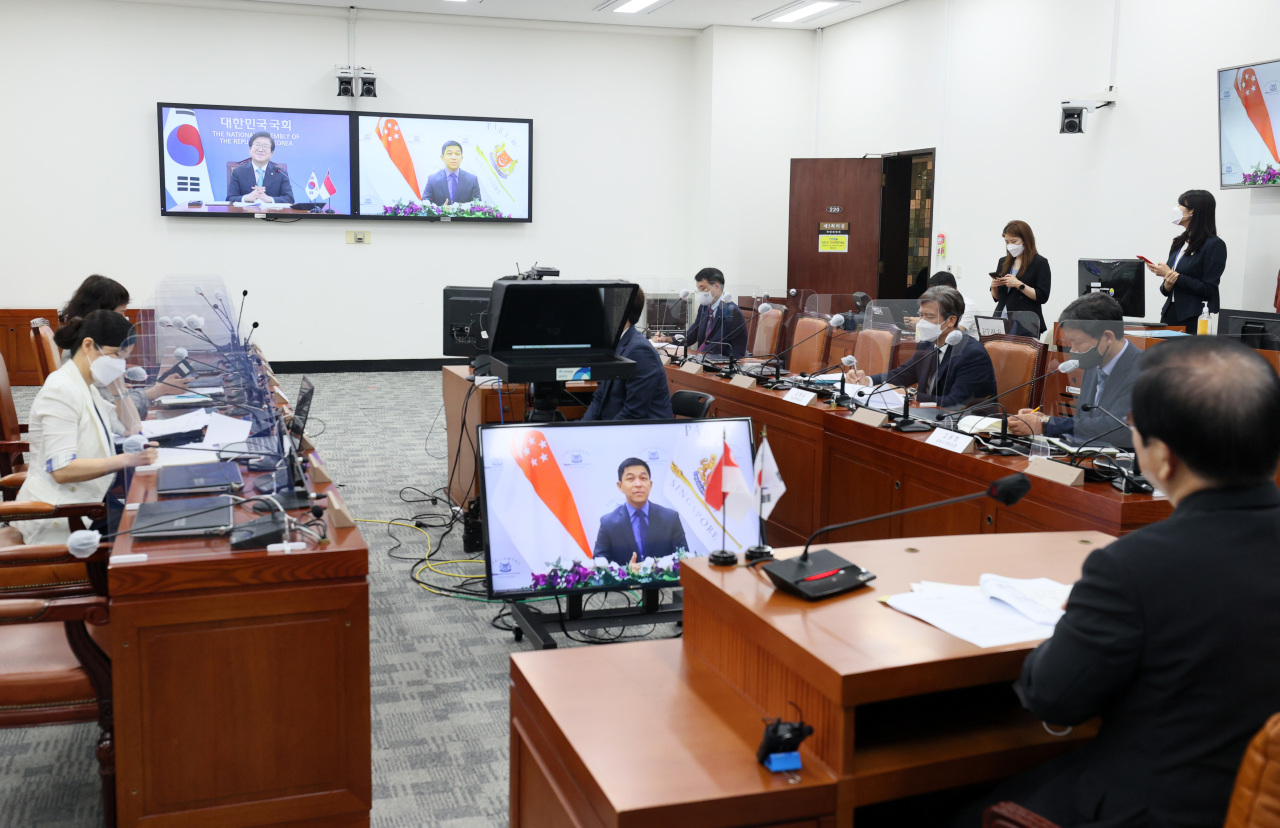 They also shared views on the Korea-Singapore Digital Partnership Agreement and the Korean Peninsula.

Park said, “We are keenly interested in the efforts of Singapore to strike the right balance between infection control, the economy and the people’s normal daily life.”

He expressed his hope “for swift progress in consultations for the mutual recognition of vaccination certificates and the early resumption of the reciprocal green lane.”

In September last year, Korea and Singapore agreed to establish the reciprocal green lane, which facilitates short-term essential business and official travel between the two countries.

Some 770 Koreans including business people benefited from the arrangement. But the resurgence of the coronavirus around the world led the Singaporean government to decide to suspend the mechanism in February this year. The Korean government has temporarily stopped issuing quarantine exemption certificates to Singaporeans based on the principle of reciprocity.

Expressing expectations for a resumption of the fast lane, Tan said that a review is underway for the mutual recognition of vaccination certificates. He added that “the Singaporean authorities have been reviewing which vaccines to recognize.”

With regard to the Korea-Singapore Digital Partnership Agreement, Park said, “Bilateral cooperation in the financial technology and startup sectors will lead to win-win outcomes for both countries.”

The KSDPA is designed to lay a foundation for cooperation in the innovation and digital sectors by applying nondiscriminatory and transparent regulations to the trade of digital products and services. The two countries launched negotiations in June last year with the aim to sign an agreement by the end of this year.

Regarding issues on the Korean Peninsula, Park expressed his appreciation to Singapore for their contribution to the historic summit between the US and North Korea in June 2018.

Park said he had proposed through his public speeches to hold an inter-Korean parliamentary meeting anytime, anywhere, without any preconditions. While Seoul has been waiting for a response from North Korean authorities, he added that “it would make another successful case if it could take place in Singapore.”

Park sought the continued attention and support of Singapore as a leading country in ASEAN so that ASEAN member states could speak with one voice on inter-Korean issues.

In response, Tan said though Singapore is a small country, it is “ready and willing to contribute to peace and stability in the region.” He added that Singapore would be “happy to offer support in any way possible for peace on the Korean Peninsula.”

Separately, Park also invited his counterpart to attend the 29th Annual Meeting of the Asia Pacific Parliamentary Forum to be held in Korea in December this year.