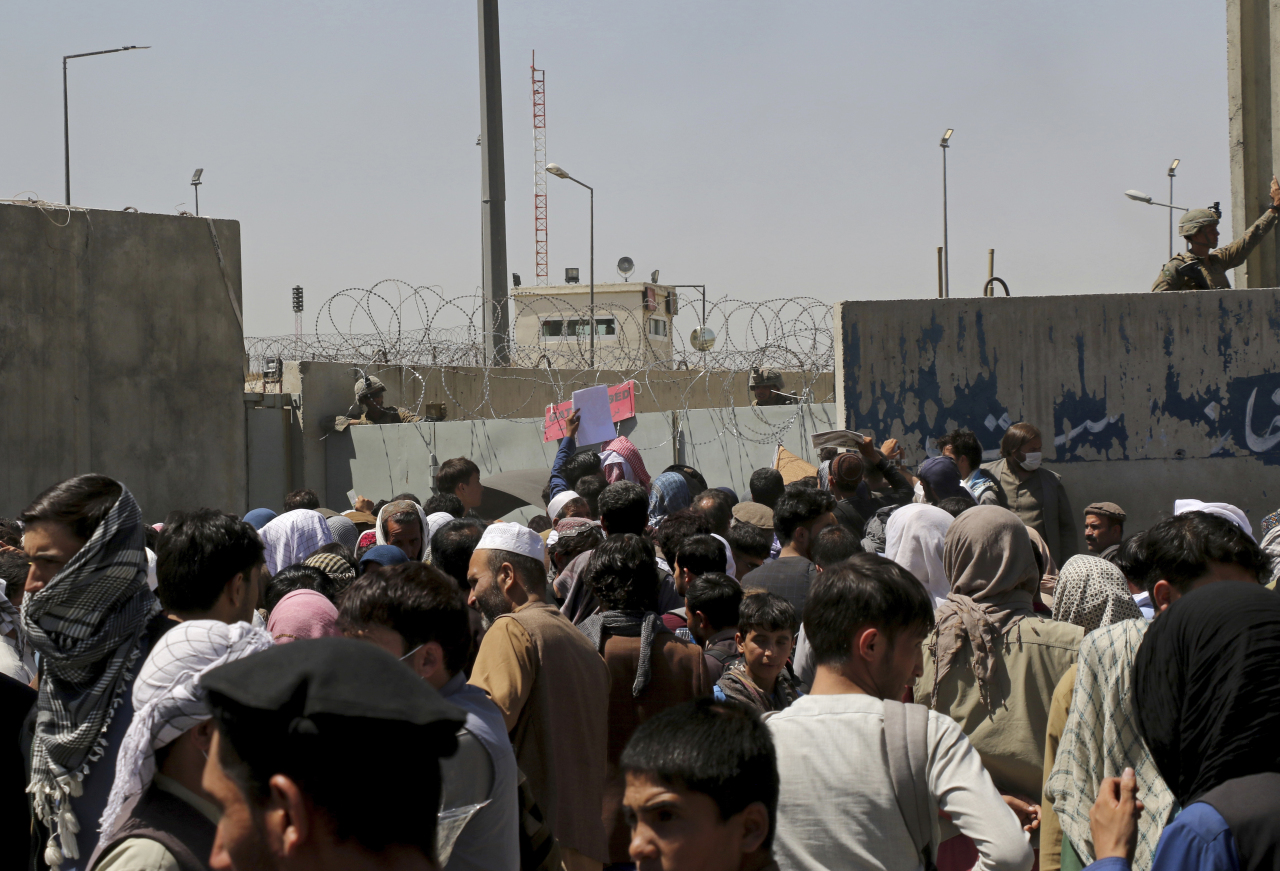 US soldiers stand inside the airport wall as hundreds of people gather near an evacuation control checkpoint on the perimeter of the Hamid Karzai International Airport, in Kabul, Afghanistan on Thursday. (Yonhap-AP)
KABUL (AFP) - Western nations warned their citizens Thursday to immediately leave the surrounds of Kabul airport over a terror threat, as thousands of people try to reach a dwindling number of evacuation flights.

Nearly 90,000 Afghans and foreigners have fled Afghanistan via the US-led airlift since the hardline Islamist Taliban movement took control of the country on August 15.

Huge crowds continue to throng the airport, their bid for a way out of Taliban rule becoming increasingly desperate ahead of the August 31 deadline set by US President Joe Biden to wrap up evacuations and withdraw troops.

Biden and his aides have not budged on the hard deadline -- even as some foreign nations warned they would be forced to leave at-risk Afghans behind -- citing an "acute" terrorist threat from the regional chapter of the Islamic State group.

The US government and its allies raised the alarm further on Thursday with a series of coordinated and specific advisories warning their citizens to avoid the airport.

Australia's department of foreign affairs said there was an "ongoing and very high threat of terrorist attack".

"If you're in the area of the airport, move to a safe location and await further advice," it said.

London issued a similar warning, adding "if you can leave Afghanistan safely by other means, you should do so immediately".

No specifics were given in the terror advisories, but Belgium Prime Minister Alexander De Croo referred to a threat from suicide bombers.

It has massacred civilians at mosques, shrines, public squares and even hospitals.

The group has especially targeted Muslims from sects it considers heretical, including Shiites.

But while IS and the Taliban are both hardline Sunni Islamist militants, they are rivals and oppose each other.

The Taliban have promised a softer brand of rule from their first stint, which ended in 2001 when the United States invaded because they gave sanctuary to Al-Qaeda.

But many Afghans fear a repeat of the Taliban's brutal interpretation of sharia law, as well as violent retribution for working with foreign militaries, Western missions or the previous US-backed government.

There are particular concerns for women, who were largely banned from education and employment and could only leave the house with a male chaperone during the group's 1996-2001 rule.

"They have not only saved our lives, but they have also saved our dreams,"

one member of a girls robotics team said of the Mexican government after fleeing Afghanistan and landing in Mexico City.

"Under this (Taliban) regime, we women will face difficulties... that is why we are grateful to be here," she told reporters.

The crowds at the airport have led to chaos throughout the airlift operations, with thousands of US troops trying to maintain a secure perimeter for evacuation flights.

Some of the Afghans massed outside the airport have foreign passports, visas or eligibility to travel, but most do not.

Several people have died in the chaos.

Despite the harrowing scenes, the Taliban have ruled out any extension to next Tuesday's deadline to pull out foreign troops, describing it as "a red line".

"They have planes, they have the airport, they should get their citizens and contractors out of here," said Taliban spokesman Zabihullah Mujahid.

Turkey, which had more than 500 non-combat troops stationed in Afghanistan, said Wednesday it had started pulling out its forces.

The withdrawal signalled an apparent abandonment of the plans it had been negotiating to help secure Kabul's strategic airport after the American departure.

European nations meanwhile announced their last flights out of Kabul.

The Dutch government described it as a "painful moment" that would leave behind some Afghans eligible for evacuation.

France said it would wrap up evacuations on Friday, having flown out some

2,500 people including French citizens and Afghans who have contributed to the French army, as well as their families, artists and journalists.

The Pentagon, which is managing all Kabul airport operations, has said it must wind down evacuations several days before August 31.

This is to allow time for the US military to remove its own 6,000-plus troops, plus hundreds of US officials and Afghan security forces, as well as equipment.