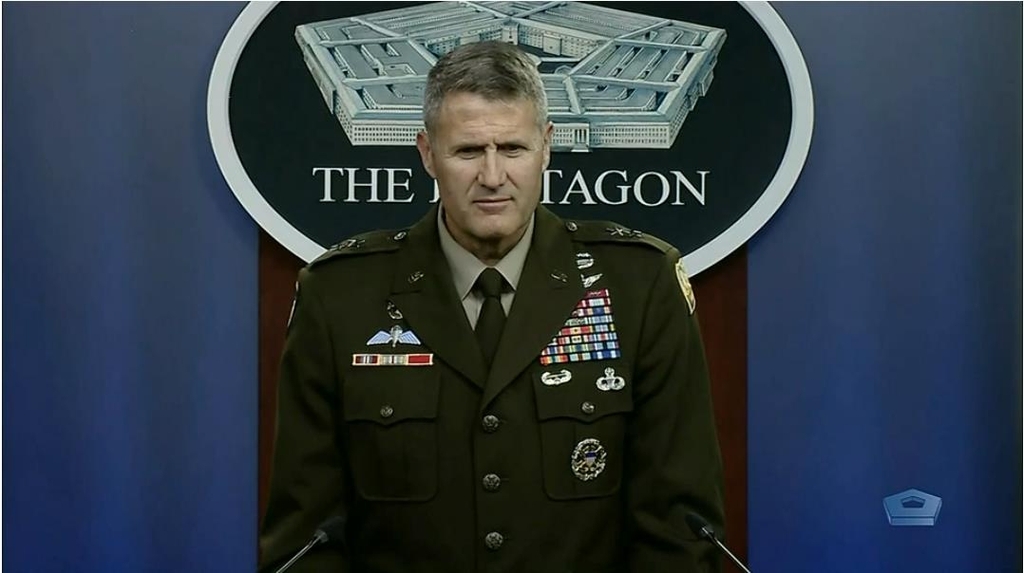 Maj. Gen. William Taylor, deputy director for regional operations of the Joint Staff, is seen answering questions in a press briefing at the Pentagon in Washington on Wednesday in this image captured from the website of the US Department of Defense. (Yonhap)
The United States is thankful for South Korea's support in getting people out of warn-torn Afghanistan, a ranking US military official said Wednesday, as the US struggles to evacuate its citizens and Afghan refugees before its deadline expires next week.

Maj. Gen. William Taylor, deputy director for regional operations of the Joint Staff at the US Department of Defense, made the remark after South Korea evacuated nearly 400 Afghans who will be airlifted to South Korea for possible settlement there.

"First of all, as we talk about the Republic of Korea's support to airlift, we, obviously as I said earlier, are extremely grateful for their contribution to increase our outflow," the US general said in a daily press briefing.

Taylor noted 42 US, military aircraft and an additional 48 aircraft of coalition forces airlifted some 18,000 people out of Afghanistan over the past 24 hours alone.

The US is racing against time as it is struggling to get tens of thousands of people out of Kabul before its deadline for withdrawal expires Tuesday.

Seoul earlier said it has sent three military aircraft to Afghanistan and neighboring countries to evacuate Afghans who had worked with South Korea's diplomatic and reconstruction missions in the Middle Eastern country and thus may be subject to retaliation by the Taliban.

Of 427 Afghans and their family members eligible for evacuation to South Korea as "persons of special merit," 391 asked to be evacuated while the rest 36 chose to stay in their motherland, according to the South Korean foreign ministry.

All 391 have been evacuated from Afghanistan and were soon set to head for South Korea for arrival on Thursday (Seoul time).

Seoul said the Afghans will be allowed to choose between staying in South Korea and moving to a third country, when and if possible.

"So once again, we're very grateful and thankful for Republic of Korea's support in helping us," Taylor said.

The US general also said his country's security commitment to South Korea remained steadfast, despite the ongoing US focus on the Middle East.

"Throughout the world, as you know, we talk about North Korea, and all of our combatant commands, you know presumably PACOM, are always diligent in watching in their mission of ensuring, keeping awareness of any type of thing North Korea is doing," he said, apparently referring to US Indo-Pacific Command or INDOPACOM.