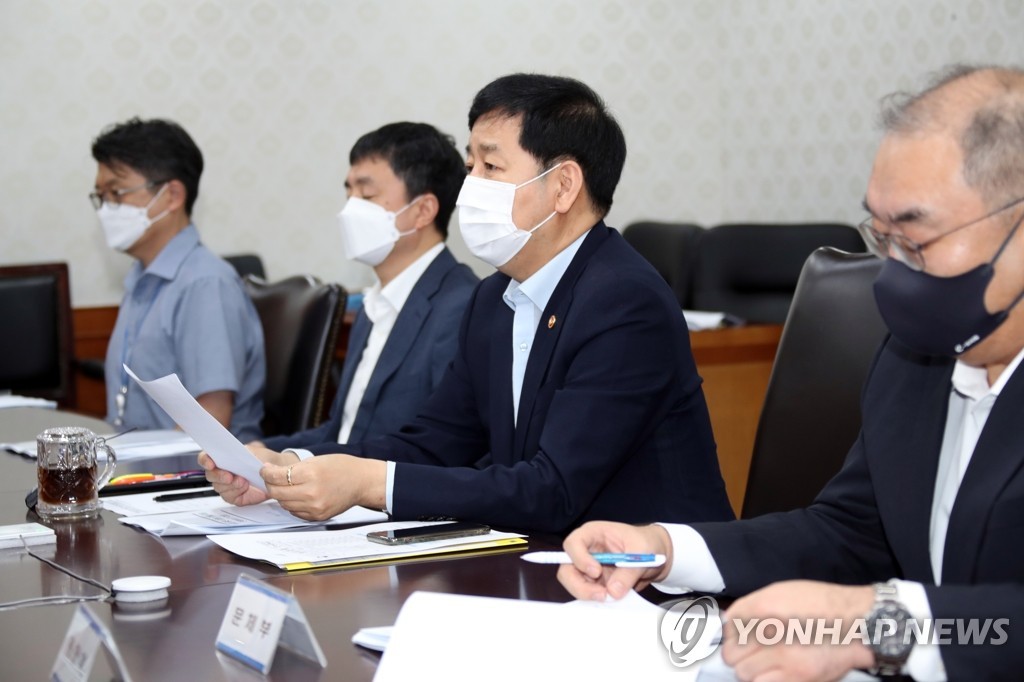 Koo Yoon-cheol (second from right), head of the office of government policy coordination, speaks during a vice-ministerial interagency meeting on Seoul's response to Tokyo's Fukushima reactor water release plan at the government office complex in Seoul on Aug. 25, 2021. (Yonhap)

The government convened a vice-ministerial interagency meeting in response to news reports that the Tokyo Electric Power Company Holdings Inc., the operator of the Fukushima plant, was planning to construct an approximately 1 kilometer-long undersea tunnel to release radioactive water from the suspended power plant into the sea.

Koo Yoon-cheol, head of the office of government policy coordination who chaired the meeting, stated that Seoul "expresses strong regret over unilaterally pursuing its plan without any prior consultations or seeking consent from our government."

He stressed that Japan was "pushing ahead" with specific administrative procedures regarding the Fukushima water release plan despite problems raised by South Korea and the international community.

Koo added that it would be advisable for Japan to "immediately halt" its plan to release radioactive water into sea and "consult and communicate sufficiently beforehand" with neighboring countries.

He also stated that South Korea will continue to work with the international community for the safety of its people and closely monitor and review future measures by Tokyo regarding the Fukushima water release plan.

An estimated 1.25 million tons of such water are in temporary storage at the Fukushima nuclear plant on the east coast of Japan, which was devastated by a tsunami triggered by an earthquake in March 2011. (Yonhap)