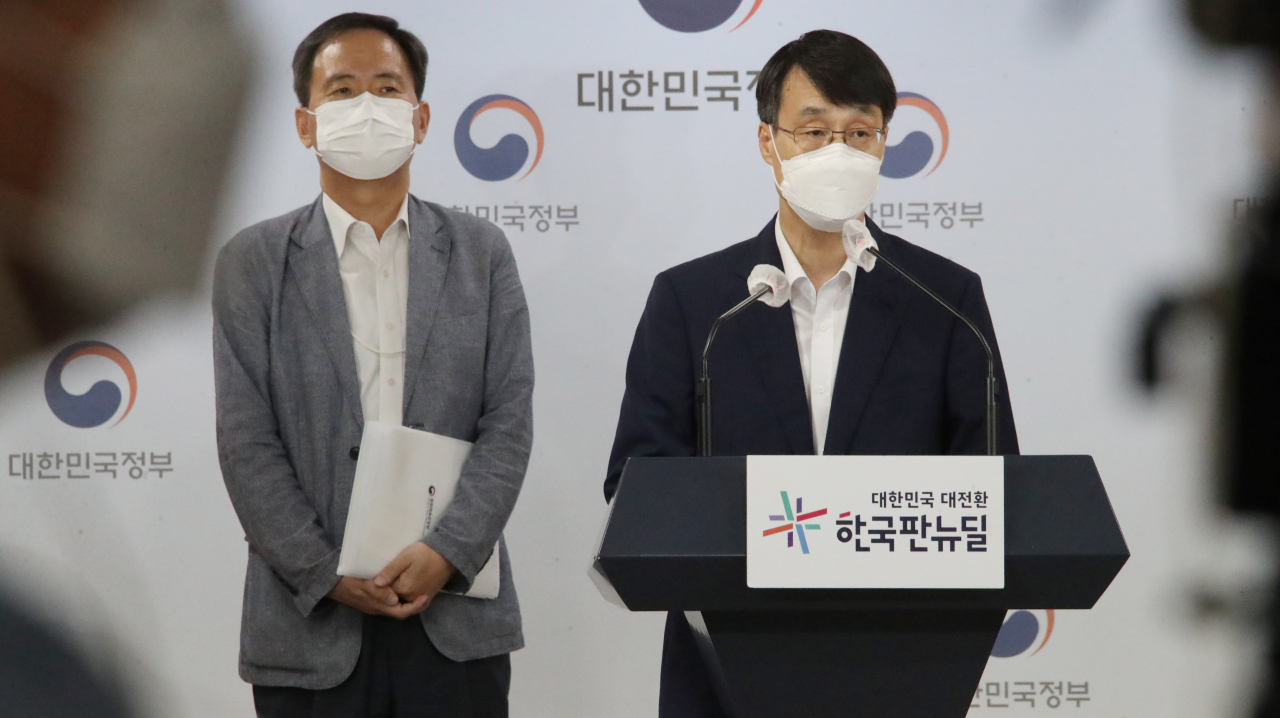 Officials from the Ministry of Culture, Sports and Tourism and the Ministry of Gender Equality and Family speak during an online press event held Wednesday at the government complex in Gwanghwamun, central Seoul. (Yonhap)

The South Korean government is to abolish the controversial “shutdown law,” lifting the curfew that blocks access to online games by underage users late at night 10 years after the law came into force.

The Ministry of Culture, Sports and Tourism and the Ministry of Gender Equality and Family announced the decision Wednesday, saying they will scrap the shutdown law out of respect for the rights of youths and encourage education at home.

Underage gamers will be protected from excessive gaming through the existing “choice system.” The choice permit system, introduced in 2012, allows underage gamers or their parents to designate hours for playing games.

According to the Culture Ministry, the utilization rate for the choice system for 40 games by seven game companies ranges from 1 percent to 28 percent.

While gamers had to request a permit for each game in the past, the Game Culture Foundation under the Culture Ministry will now take charge of the entire application process. Youngsters without parents can have legal guardians, teachers or social workers request permits for them.

The abolition of the shutdown law requires the revision of the Youth Protection Act. The government is seeking the passage of a revision bill at the National Assembly by year-end.

The shutdown law requires gaming companies to block access to games by users aged 16 or younger between midnight and 6 a.m. However, some foreign game companies have failed to change their systems to reflect Korean law.

“Minecraft,” which is highly popular among schoolchildren, became a de facto “R-rated” game in Korea after Microsoft changed its account system, requiring users to use adult-only accounts instead of blocking access to underage users at certain hours.

The Korea Association of Game Industry expressed support for the government’s move. “We support and welcome the abolishment of the shutdown law,” it announced.

Enacted in 2011 to protect young people from excessive gaming and to prevent gaming addiction, the shutdown law bans gamers aged 16 or under from playing online PC games between midnight and 6 a.m.

Under the law, game companies can be fined up to 10 million won ($8,560) or face up to two years behind bars if they offer game services to underage users during curfew hours. According to the government announcement, China is the only other country where the government restricts gaming hours.

According to the ministries, the shutdown law needed revision as mobile games had not been included in the mandatory game shutdown system, and over the years other late-night entertainment platforms for young people had developed. These included one-person media, streaming media, web comics and social media.

“For youths, games are an important leisure activity and communication channel. I hope that the preventive measures can respect the rights of the youths and encourage healthy home education,” Culture Minister Hwang Hee said in a press release.

The government has decided to strengthen education on gaming, too. It will expand its gaming culture and media literacy outreach programs. The educational reform slated for 2022 will include content on excessive gaming. It will produce a 10-minute video clip on game guidelines that parents, guardians and teachers can refer to when conflicts related to gaming surface.

The Gender Ministry will work on identifying young people who play games excessively and providing counseling and treatment. It will also expand rehabilitation camps, both online and residential.