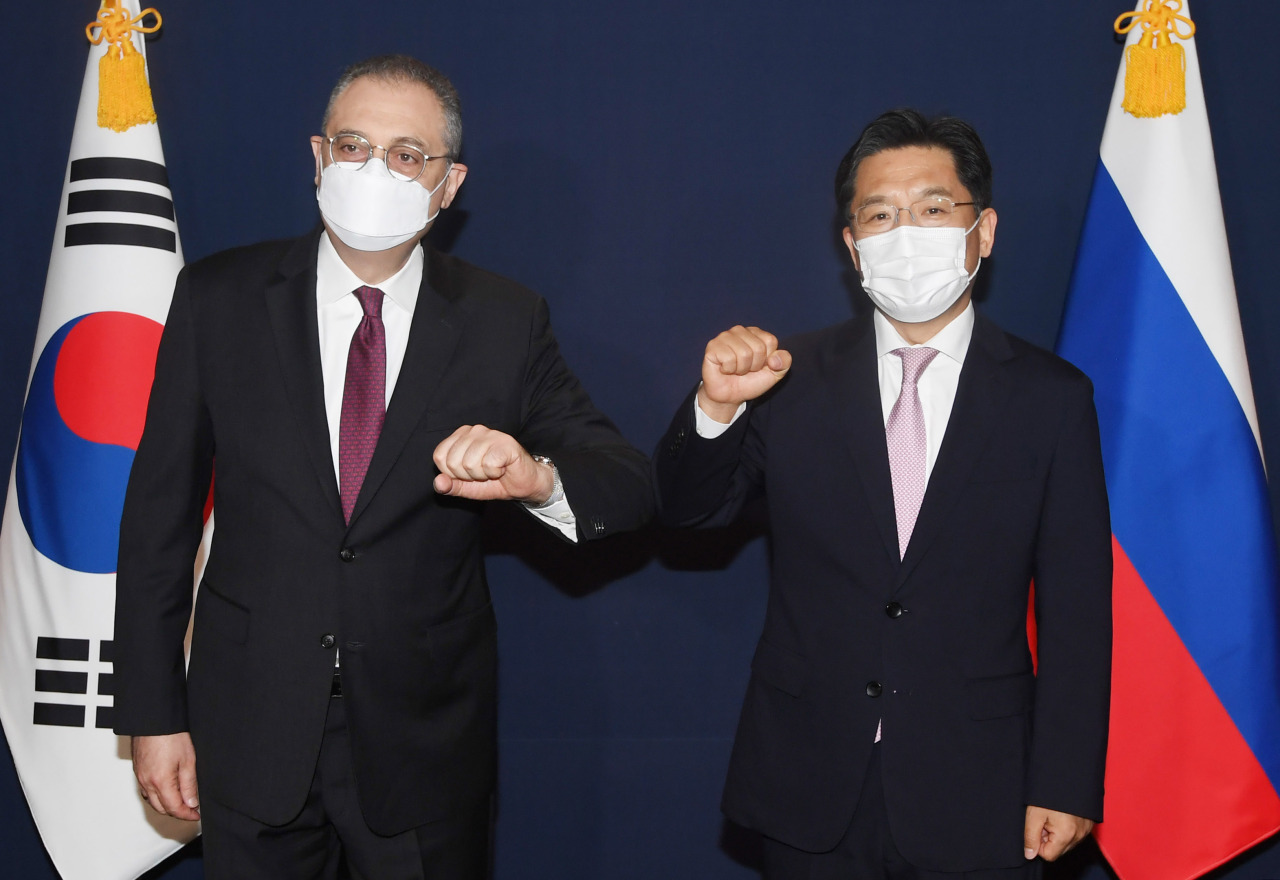 South Korea’s chief nuclear envoy Noh Kyu-duk (right) elbow-bumps with Russian Deputy Foreign Minister Igor Morgulov during their talks at a hotel in Seoul on Tuesday. (Yonhap)
Seoul and Moscow on Tuesday reaffirmed the importance of close coordination and the need to induce Pyongyang back to the stalled denuclearization talks, in the meeting between the two sides’ top nuclear envoys.

South Korea’s chief nuclear envoy Noh Kyu-duk held talks with visiting Russian Deputy Foreign Minister Igor Morgulov, who doubles as the country’s top nuclear envoy, on Tuesday. The pair exchanged views on the overall situation on the Korean Peninsula and ways for the two countries to cooperate for the complete denuclearization and permanent peace on the peninsula, according to the Foreign Ministry.

The ministry said Noh acknowledged Russia’s continued support for dialogue and inter-Korean cooperation, and requested Moscow play a “constructive role” for the stable management of the situation and bring Pyongyang back to the negotiating table.

In turn, Morgulov stressed the importance of stability on the Korean Peninsula and in the region, and the need for a swift resumption of dialogue with Pyongyang among relevant countries, including the talks between North Korea and the US and between the two Koreas. Russia reaffirmed its desire to take on a constructive role to resolve the Korean Peninsula issue peacefully.

The two sides agreed to continue close consultation at all levels to make progress on the Korean peace process, and Noh was invited to visit Russia for future talks.

Morgulov’s visit here comes as prospects for resumption of stalled nuclear talks with Pyongyang appear bleak amid the ongoing joint military drills between the US and South Korea, which Pyongyang denounced as the “most vivid expression of the US hostile policy” toward the North, warning the allies of a “security crisis.”

Russia was a member of the now-defunct six party talks -- also involving China, Japan, the US and the two Koreas -- to denuclearize Pyongyang. Seoul believes that Moscow, which is close to the North and a permanent member of the UN Security Council, could wield some influence over the reclusive regime to refrain from provocation and return to nuclear talks.

Momentum for a breakthrough in soured inter-Korean ties was short-lived after Pyongyang slammed the ongoing joint drills of the allies as an “unwelcoming act of self-destruction for which a dear price should be paid.” Pyongyang also refused to answer routine calls on inter-Korean hotlines and has been unresponsive since Aug. 10, just two weeks after the communication channels were restored after a yearlong halt.

The sudden resumption in inter-Korean channels on July 27 -- the outcome of a series of letters exchanged between South Korean President Moon Jae-in and North Korean leader Kim Jong-un -- has raised hopes for a thaw in inter-Korean ties as well as improved US-North Korea relations.

Denuclearization talks stalled during the Trump administration after the collapse of the Hanoi summit in 2019, when former US President Donald Trump rejected Kim Jong-un’s offer of major sanctions relief in exchange for North Korea’s denuclearization. Since then, inter-Korean ties have also remained at a standstill.