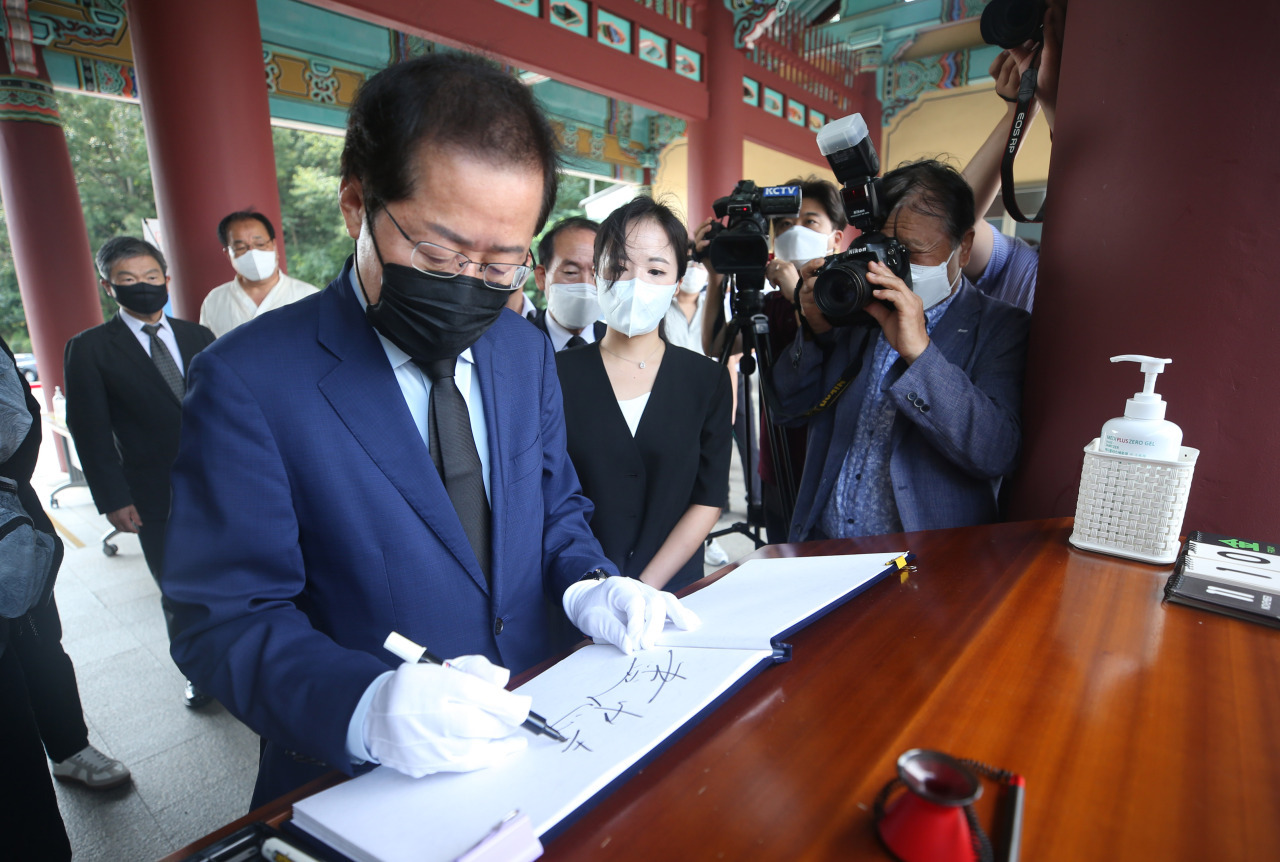 In a survey of 1,007 voters nationwide conducted on Friday and Saturday by the Korea Society Opinion Institute (KSOI) and commissioned by TBS, 20.5 percent said they would vote for Hong among conservatives, while 28.4 percent chose Yoon.

Hong entered the 20 percent range for the first time since KSOI began the weekly polls for candidates in different political groups in June.

In the presidential preference polls for the wider conservative bloc, Yoon’s ratings marked 30.5 percent on Aug. 6 and 7; went down to 26.7 percent on Aug. 13 and 14; and inched up slightly last week.

Hong, on the other hand, saw his ratings steadily rise from 13.6 percent to 16.6 percent, and then to 20.5 percent in the same period.

Hong, on the other hand, grew more popular among people in their 20s, with his ratings jumping from 7.2 percent to 17.6 percent and 18.8 percent in the same period.

Hong wrote on Facebook after the poll results were released on Monday that he will seek to achieve a golden cross around Chuseok holidays.

He attributed his rise in ratings last week to his official announcement to run for president and beginning of a provincial tour.

Political observers say centrists and young voters who grew tired of the nitpicking between Yoon’s camp and the PPP leadership were turning their heads toward Hong as he made straightforward criticism of Yoon and presented concrete campaign pledges.

On Tuesday, Kim Jae-won, a member of the People Power Party’s supreme council, apologized for making disparaging remarks against Hong on a YouTube show.

Asked if he would consider joining hands with Hong on the show broadcast on Saturday, Kim said, “No, I think his chances of winning are low.”

About the possibility of Hong beating Yoon, Kim said, “That would be serious trouble.”

Hong shot back, saying he wishes Kim “disappears from politics” and that he should have done so when he lost in the parliamentary election last year.

Hong’s camp said it was a shame “the very person who ruined the conservative administration as a political aide to former president Park Geun-hye was still loitering around in politics.”

Kim said on Tuesday that he sincerely apologizes to the person who was hurt, and that he will stop appearing on the YouTube show

The KSOI survey has a margin of error of 3.1 percentage points on a confidence level of 95 percent.