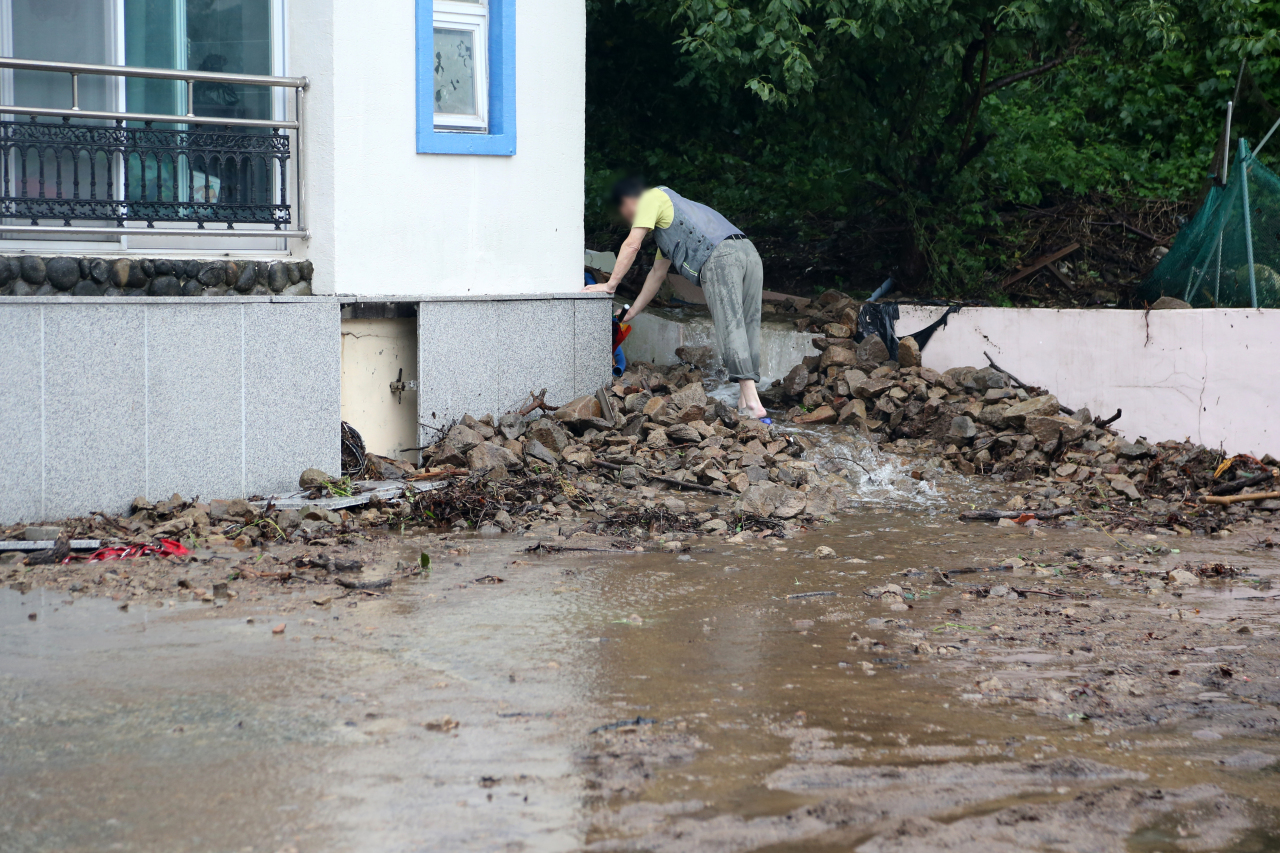 A resident removes rocks and dirt near his home in Pohang, North Gyeongsang Province, on Tuesday. (Yonhap)
Typhoon Omais weakened into an extratropical cyclone Tuesday morning, after making landfall around midnight Monday, flooding roads and houses, and forcing more than 10,000 people to evacuate in southern South Korean cities that lay in its path.

Typhoon warnings issued the previous day were all lifted, but the weather service forecast heavy rains of up to 200 millimeters with strong winds, as well as occasional lightning and thunder, to continue throughout the day in the coastal areas and southern parts of the country.

The season's first typhoon to hit the country dissipated over the East Sea, bringing heavy downpours for its relatively small size, packing wind gusts of up to 18-19 meters per second and pressure of 996 hectopascals.

Firefighters rescued 11 people from flash flooding and no injuries were reported as of early Tuesday, according to the Central Disaster and Safety Countermeasures Headquarters, but 10 people were displaced in Tongyeong, South Gyeongsang Province, and 1,106 people were evacuated amid fears of landslides and flash floods in eastern Busan, Changwon and South Jeolla Province.

The railway connecting Gwangju and Miryang in South Gyeongsang Province was cutoff after parts of the railway became covered with piles of mud from heavy rainfall early Tuesday morning.

Six roads in the provinces of South Gyeongsang and South Jeolla were inundated with flash floods.

High winds and heavy downpours forced 86 flights and 70 ferries to stop service. Thousands of boats were anchored at ports nationwide and 450 trails at 18 national parks were closed.

More than 10,000 residents living in landslide-prone areas in eastern Busan, Changwon and Suncheon and Damyang, both in South Jeolla Province, fled their homes by Monday night.

The national weather service warned of continuing rains Tuesday in southern Korea largely due to a low pressure system approaching the peninsula. (Yonhap)