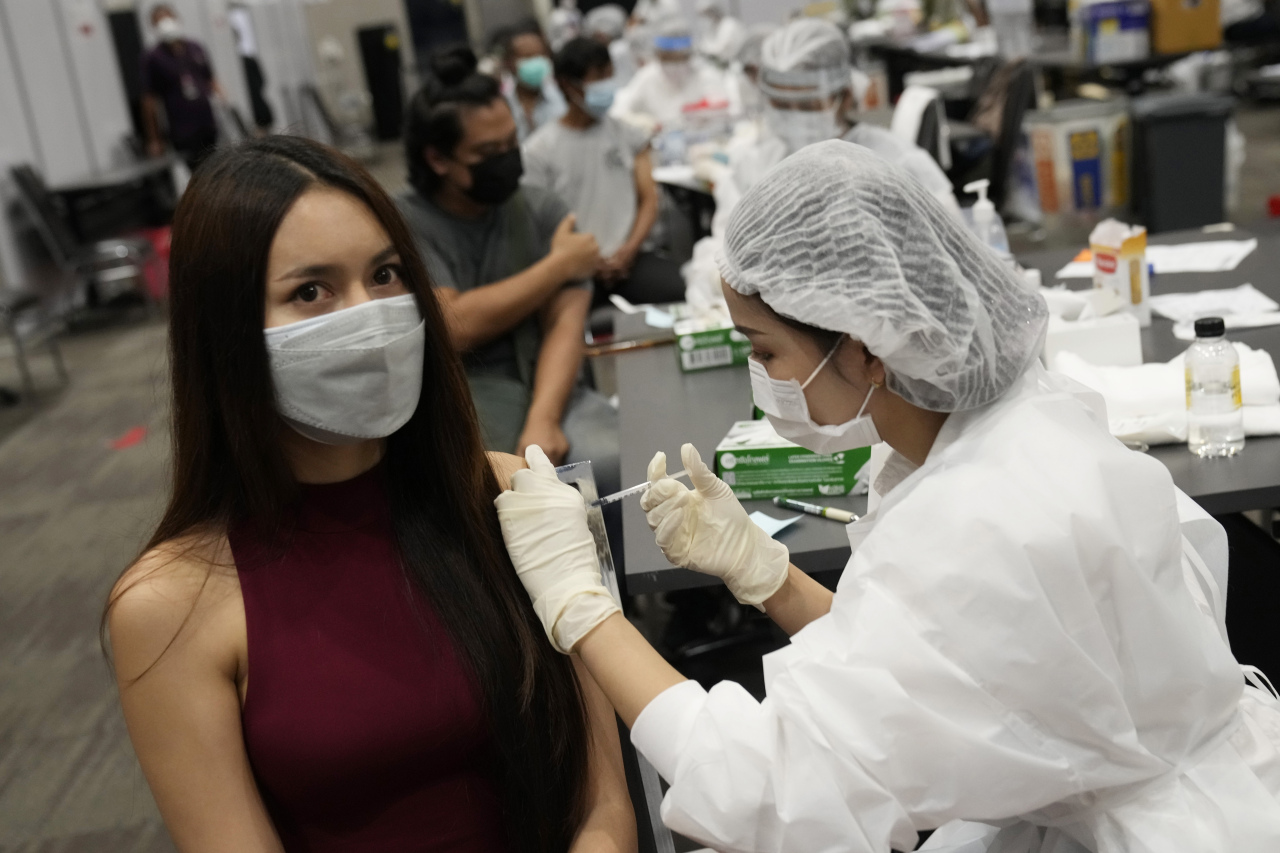 A health worker administers a dose of the AstraZeneca COVID-19 vaccine to a woman in Bangkok, Thailand, Friday. (AP)
Thailand is preparing for life with Covid, with preliminary plans being drawn up to relax some restrictions and reopen its borders to vaccinated visitors even as new cases hover around 20,000 a day.

The National Communicable Disease Committee on Monday approved a shift in the country’s strategy to “learning to live with Covid-19,” recognizing the endemic nature of the virus, according to Opas Karnkawinpong, director-general of the Department of Disease Control.

The focus going forward will be on containing infections to a level that doesn’t exceed capacity of Thailand’s public-health system, with key measures being total vaccination coverage for vulnerable groups and faster case-tracing on the assumption that everyone can become infected and transmit the virus, he said.

Among the preliminary proposals are easing some quasi-lockdown rules next month and replication of a tourism-reopening project in October based on a pilot project in Phuket. Other planned measures weren’t announced.

Thailand was considered a success story at the outset of the pandemic, reporting relatively few infections even though it was the first nation after China to detect a case. Early confidence was one reason the government was slow to secure vaccine deals and ramp up inoculations. A series of stumbles in its inoculation program resulted in a shortfall just as the delta variant arrived, leading to a near-relentless surge of infections since April.

But the latest data related to infections, test results, patients in critical care and spread patterns suggested that the current outbreak has peaked, health officials said Monday. That should enable some restrictions to be eased, according to Opas. The country on Monday reported 17,491 new cases, the lowest single-day increase since July 30, compared to more than 20,000 infections daily much of this month.

That slight drop has come at a steep cost. Currently, cities and provinces that are home to more than 40% of Thailand’s population and generate more than three-quarters of economy output are under strict curbs -- including closure of all “non-essential” businesses, restrictions on inter-provincial travel and a curfew between 9 p.m. and 4 a.m.

Thira Woratanarat, an associate professor at Chulalongkorn University’s Faculty of Medicine, said that the number of new infections being reported doesn’t reflect the real situation given the variants, the omission of cases found using self-test kits and fewer tests being administered.

While conveyed as a strategy shift, the wording on Monday mirrors that of a speech in June by Prime Minister Prayuth Chan-Ocha, in which he said much of the country would be reopened in October “to start reducing the enormous suffering of people who have lost their ability to earn an income.” He called it a “calculated risk” and asked that people “be ready to live with some risk.”

About 8% of the population nationwide has been fully inoculated. Vaccination rates are higher in regions that have reopened under special tourism programs -- including the island of Phuket -- and those with the worst outbreaks, including Bangkok. Opas said that Phuket’s reopening on July 1 to fully vaccinated tourists showed that if the situation can be controlled, economic activities can be stepped up and people can resume their everyday lives.

Last week, the government said it plans to issue “Thai Covid Pass” to inoculated residents, which would allow access to certain places including restaurants. (Bloomberg)