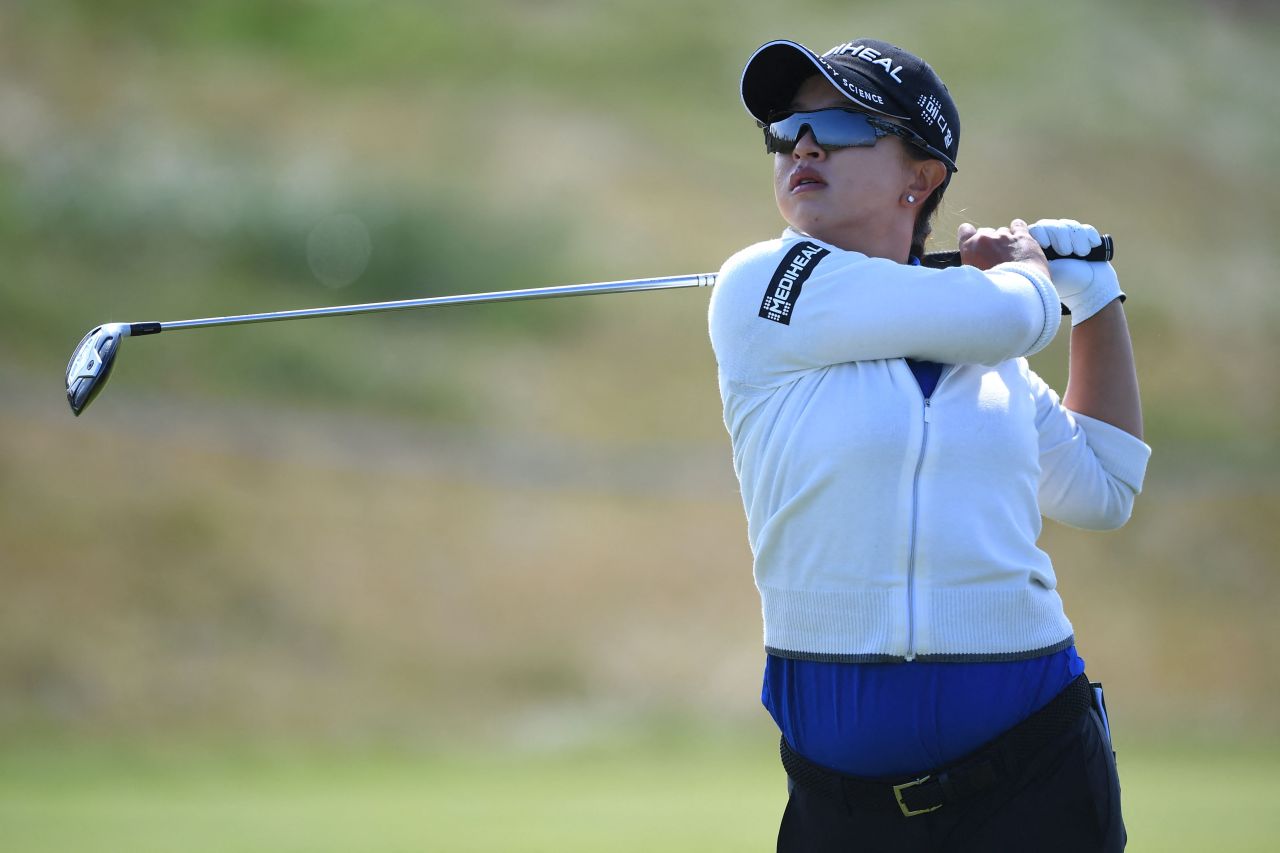 In this AFP photo, Kim Sei-young of South Korea hits her tee shot on the fifth hole during the final round of the AIG Women's Open at Carnoustie Golf Links in Carnoustie, Scotland, on Sunday. (AFP-Yonhap)
Kim Sei-young finished tied for 13th at the final major tournament of the 2021 LPGA season in Scotland, leaving South Korea without a major champion for the first time in 11 years.

Kim shot an even-par round of 72 at the AIG Women's Open at Carnoustie Golf Links in Carnoustie, Scotland, on Sunday (local time). With a four-round total of six-under 282, Kim ended in 13th place with six others. Anna Nordqvist of Sweden won the championship at 12-under 276.

Kim started the final round at six-under par, three strokes behind co-leaders Nordqvist and Nanna Koerstz Madsen of Denmark.

Kim was the only South Korean with a realistic chance of winning this tournament but couldn't make up any ground while shooting her second straight 72, which featured three birdies and three bogeys.

Kim had a fine start to the day, picking up a birdie at the first hole after missing the fairway just to the left. At one point, Kim was one of 10 players at seven-under par on the crowded leaderboard.

Kim fell out of the picture, however, with bogeys at the fourth and the seventh. She tried to jump back into contention with birdies at the eighth and the 11th. She was back at seven-under with seven holes to play, while there was a four-way tie at the top at 10-under: Madsen and Nordqvist joined by Minjee Lee of Australia and Lizette Salas of the United States.

Kim gave back a shot with a bogey at the 16th and was well outside the top 10 by the time she reached the clubhouse.

Kim was tied for the opening round lead after shooting a 67 but followed that with rounds of 71-72-72.

"I made mistakes that I shouldn't have made," Kim said.

"Driving is really crucial on this golf course, but I was off with my tee shots on the final two par-5 holes (at the 12th and 14th)."

Kim said she felt "bittersweet" about coming up empty-handed from five majors and the Tokyo Olympics this year.

"I have about two to three weeks left until my next tournament, and I'll go back to Korea to work on a few things with my coach,"

Kim said. "I have been inconsistent with my ball-striking and so I need to have it checked."

Kim always plays the final round of a tournament in her signature red trousers but played in black pants with a white zip-up over a blue polo.

"I thought I'd packed red pants, but I forgot about them. Maybe that's why I didn't play so well today," Kim said with a laugh. (Yonhap)