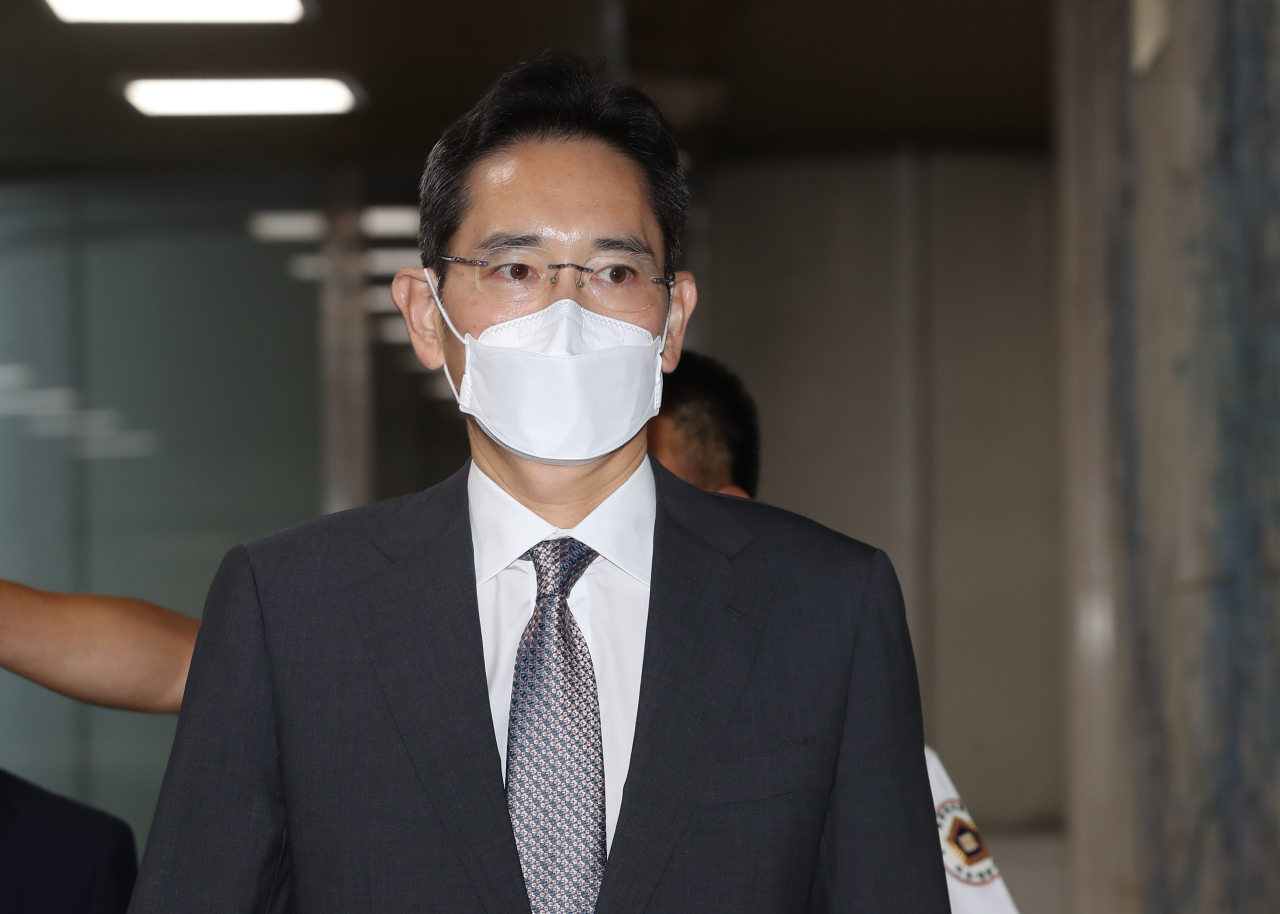 Lee Jae-yong, vice chairman of Samsung Electronics, attends a trial over a suspected fraud and stock manipulation case at the Seoul Central District Court on Thursday. (Yonhap)
South Korean Justice Minister Park Beom-kye on Thursday reiterated his stance that Samsung Group’s de facto chief Lee Jae-yong is not technically working at Samsung and so is not breaking a work ban imposed on him.

“It is hard to say Lee is employed at this moment,” Park told reporters on Thursday, repeating what he said a day before. “Lee has not been paid for years, does not have a permanent position and is not a registered executive.”

Park then added, “A corporation that issues shares makes final decisions through its board of directors and shareholders’ meetings. Lee cannot take part in the board’s decision making since he’s not a registered executive.”

The comments came as the employment status of Lee, who holds an official title of Samsung Electronics vice chairman and holds control over the entire Samsung empire, is stirring a controversy over the effectiveness of a five-year restriction on employment placed on economic criminals like him.

Lee, convicted of embezzlement and bribery, was paroled last week after serving over 60 percent of his 30-month jail term.

Several activists gathered in front of the Seoul Central District Court on Thursday to express their opposition to what they see as “special treatment” for Lee, as the Samsung leader walked into the court building for a hearing on a separate trial.

Lee attended the 12th hearing of the trial regarding the group’s maneuvers from 2013 through 2015, including major IPOs and M&As, which are suspected of having a hidden purpose of helping him inherit control from Lee’s father – the late chairman Lee Kun-hee.

It was the first hearing held since Lee was freed from prison last Friday.

Due to the negative public sentiment about the parole, Lee‘s legal representatives have requested that police provide personal protection for the Samsung chief.

Liberal activists that had voiced strong opposition to Lee’s parole are also denouncing the Samsung leader’s moves after being released on Friday.

Citizens’ Coalition for Economic Justice said Wednesday it will file a criminal complaint against Lee for violating the employment ban.

The organization claimed “Lee is still exercising his management rights despite the work ban after parole,” in a statement.

Samsung’s Lee headed to the group’s symbolic headquarters in Seocho, southern Seoul, on Friday as he soon as he was released. He reportedly met with the top executives of Samsung Electronics and was briefed on major business affairs.

“The employment restriction is supposed to protect companies from those who have committed crimes for a certain period by banning them from exercising their power,” the organization said. “It is absurd to say that Lee is not violating the law because he is not paid nor he is not a registered executive.”

The restriction is usually imposed on those convicted of economic crimes such as embezzlement and breach of trust worth over 500 million won.

Lee was convicted of offering 8.7 billion won-worth of bribes to former President Park Geun-hye in January, and was sentenced to a 2 1/2-year imprisonment.

However, the Ministry of Justice granted parole to Lee along with hundreds of prisoners who served at least 60 percent of their prison terms, a tradition that marks the country’s Aug. 15 Independence Day.

On including Lee in the parolee list, the presidential office Cheong Wa Dae and the Justice Ministry cited economic situations under the pandemic as well as the country’s need to secure more COVID-19 vaccines as its reason.