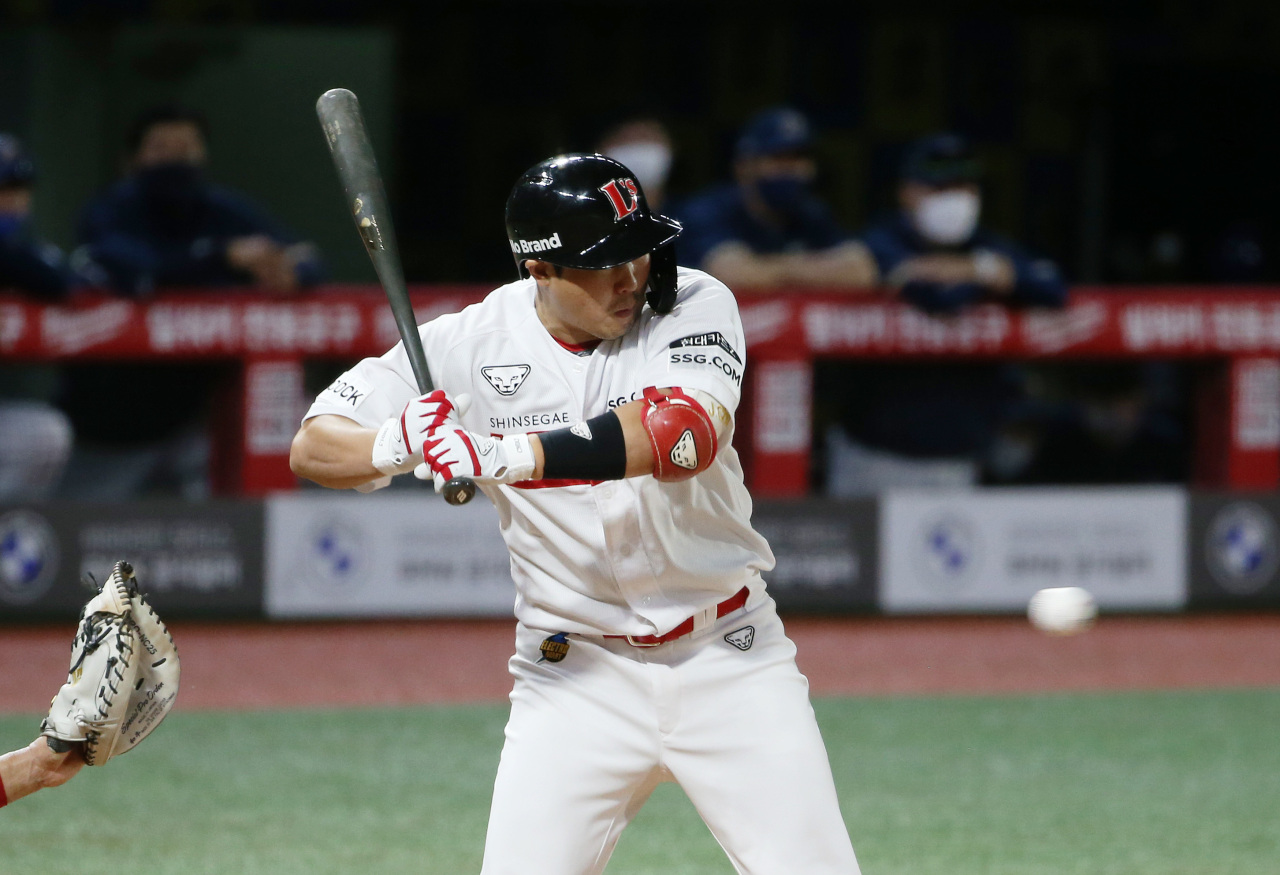 Choi Jeong of the SSG Landers is getting hit by a pitch for the 288th time of his career against the NC Dinos in the bottom of the sixth inning of a Korea Baseball Organization regular season game at Incheon SSG Landers Field in Incheon, 40 kilometers west of Seoul, on Wednesday. (Yonhap)
After an errant pitch brushed his jersey, SSG Landers' slugger Choi Jeong didn't just walk to first base. He also trotted into the record books.

On Wednesday night in the Korea Baseball Organization (KBO), Choi got hit by a pitch for the 288th time in his career. The Landers billed it as "the world record," as Choi surpassed the major league mark of 287 held by Hall of Famer Hughie Jennings. His career spanned from 1891 to 1918 but his last hit-by-pitch came in 1903.

It's difficult to compare different leagues and different eras.

Either way, Choi, the 34-year-old third baseman playing in his 17th season, said he didn't mind holding the dubious mark.

"I've been plunked so much, and I am fortunate to have played in a lot of games without major injuries," Choi said. "It's the type of record you can have only if you play for a long time. I think it's a fun record, something I can laugh about."

Choi vowed that he won't change his approach at the plate, saying, "I'll try to stay as healthy as I can and continue to be aggressive in the box."

The record-setting moment came in the bottom of the sixth inning against the NC Dinos at Incheon SSG Landers Field in Incheon, 40 kilometers west of Seoul. With the Landers up 2-1, Choi led off the inning against starter Drew Rucinski.

With the count full, Rucinski's payoff pitch, a two-seam fastball, got away from him and hit Choi just above the belt.

And the hit-by-pitch set the stage for a crucial inning. Two batters later, Han Yoo-seom smoked a two-run home run to right field that gave the Landers some breathing room with a 4-1 lead.

When Choi isn't getting hit by pitches, he hits them out of the park.

Choi is second on the KBO's all-time home run list with 388. He has 20 home runs this year, the sixth straight season in which he's reached that mark, and 10th such season for his career. Choi is just the fourth player in league history to hit 20 or more home runs in at least six consecutive seasons.

But Choi's last home run came on June 29, 15 games ago. It's his longest homer drought of the season. (Yonhap)