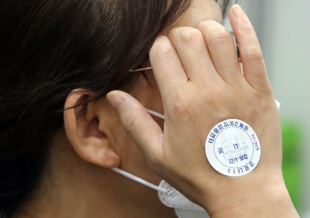 Someone prepares to receive a shot at a vaccination center in Seongbuk-gu, Seoul, Wednesday. (Yonhap)
The prime minister has urged young South Koreans to get vaccinated for COVID-19, saying more of the country’s unvaccinated young people are becoming critically ill.

“We believe that some people still avoid vaccination because of concerns about side effects. And some don’t get shots because they think the coronavirus is nothing,” Prime Minister Kim Boo-kyum said Wednesday.

“However, even among unvaccinated young people, the number of severely ill patients (due to infections) has risen recently,” Kim said. “Inoculation not only lowers the risk of infection, but also greatly reduces the chances of hospitalization and death.”

Participation in the nation’s advance booking system for vaccinations by people aged 18-49 fell short of the government’s expectations.

Booking for that age group began Aug. 8. The government expected a reservation rate of 70 percent, but so far it stands at 60 percent.

As vaccination efforts speed up for the most active age group, some still shun the shots.

Dr. Kim Tak, a professor of infectious disease at Soonchunhyang University, said we may have to wait a little longer to see the inoculation rate rise among younger people.

“But because young people have a relative low fatality rate when they are infected with the coronavirus, the direct benefits from vaccination are small. Things are similar overseas.”

He still urged young people to get the shots because there are cases where people aged 30 or older become severely ill from the coronavirus, and the socioeconomic damage caused by the pandemic can also affect them.

Health concerns also increase for those in their 40s and 50s who are unvaccinated or who have received only one dose.

Kwon Jun-wook, president of the Korea National Institute of Health, said Monday, “As the number of patients increases, the number of severe cases and deaths continues to increase, especially among those in their 40s and 50s.”

The number of patients with severe cases in that age group increased to 193 in the second week of August, from 76 a month earlier. The number of deaths increased from four to 11 during the same period.

The quarantine authorities said that if the vaccination rate does not reach the level needed to create herd immunity, deaths and critical cases will inevitably increase. They said 89.8 percent of COVID-19 patients who became critically ill or died between May and Aug. 2 were unvaccinated.