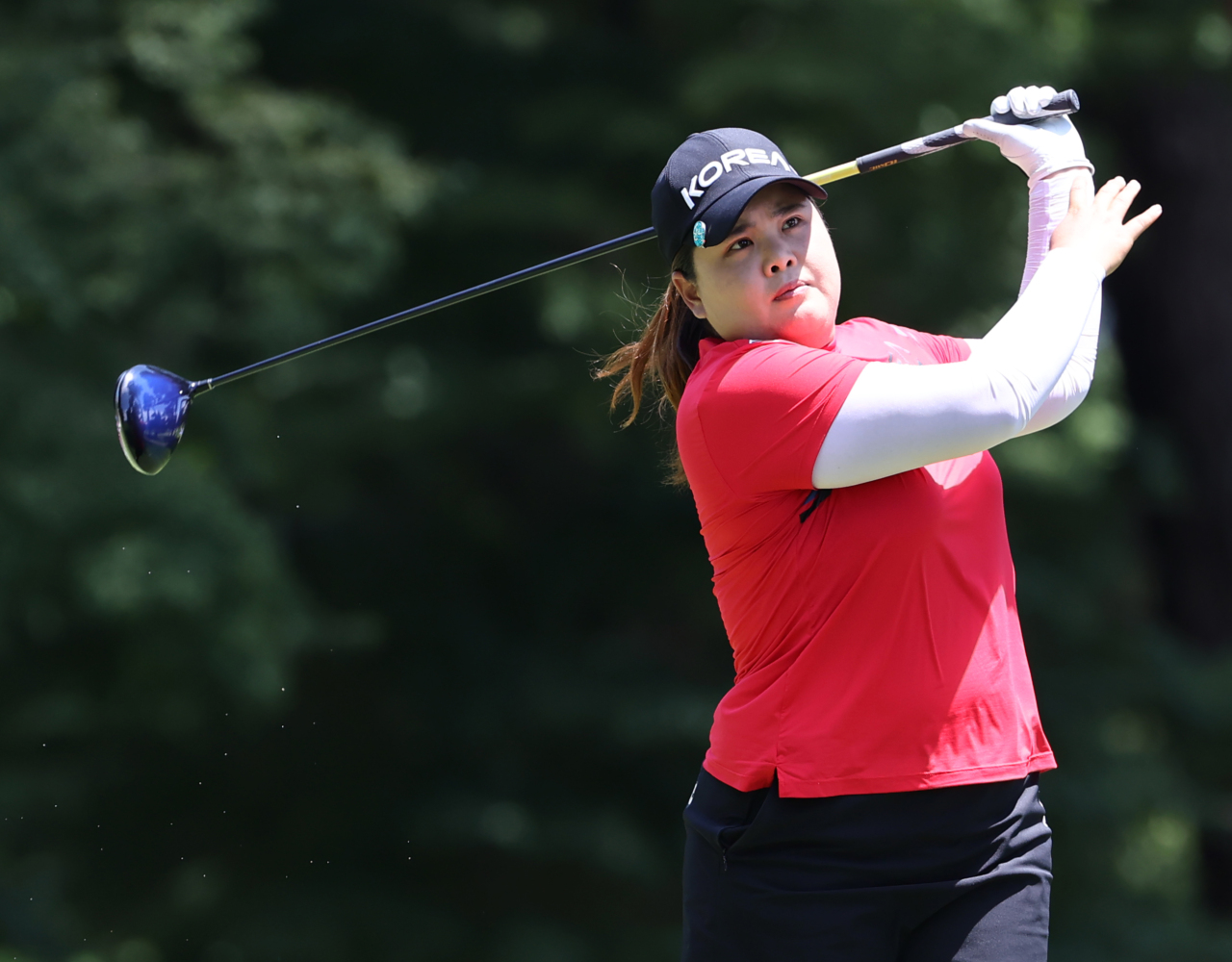 Park In-bee of South Korea hits a tee shot on the 17th hole during the third round of the Tokyo Olympic women's golf tournament at Kasumigaseki Country Club in Saitama, Japan, on Aug. 6, 2021. (Yonhap)
On a historic course in Scotland this week, South Korean LPGA golfers will try to avoid making a wrong kind of history.

Long a dominant force in women's golf, South Korea is in danger of being shut out at LPGA major championships for the first time in 11 years.

The AIG Women's Open, the fifth and final major of 2021, will tee off at Carnoustie Golf Links in its namesake Scottish town Thursday.

The four previous majors were won by four players from four countries. For South Korea, Lee Jeong-eun came the closest to winning one, at the Amundi Evian Champion in France last month.

Lee held a five-stroke lead going into the final round, but Minjee Lee of Australia stormed back from seven shots behind to tie Lee at 18-under 266 after 72 holes. She then beat the South Korean at the first hole of the sudden-death playoff.

Put majors aside, and this still has been a down year for South Korean players in the LPGA. The country has only produced three winners out of 21 tournaments so far. In the abbreviated 2020 season, cut short by the COVID-19 pandemic, South Korean combined to win seven out of 18 tournaments, including three of the four majors after the Evian Championship was canceled.

This year, Nelly Korda of the US has been the singular force. The world No. 1 has three wins by herself, matching the total by South Korean players, and also leads the tour in scoring average, money, top-10 finishes and Player of the Year points. Korda even won an Olympic gold medal in Japan earlier this month for good measure, leaving South Koreans on the outside looking in again.

Any path to the winner's circle at Carnoustie will likely have to go through Korda, who captured her first career major at the KPMG Women's PGA Championship in June.

Two of the four South Korean Olympians, world No. 2 Ko Jin-young and No. 7 Kim Hyo-joo, will skip the AIG Women's Open.

That leaves world No. 3 Park In-bee as the highest-ranked South Korean in the field this week. Park is also one of the three South Korean LPGA winners this year, alongside Ko and Kim. Park is a seven-time major champion with one Open title from 2015.

Park tied for seventh the last time Carnoustie held the Women's Open in 2011.

"I don't know what we're going to get this week obviously, and it's a really windy-dependent golf course," Park said at her pretournament press conference Tuesday. "And when it's windy, this golf course can get really, really tough. When it's not windy, it's scorable."

The fourth member of the Olympic quartet, the fourth-ranked Kim Sei-young, will chase her second career major. Kim has recorded at least one victory in every season since her Rookie of the Year campaign in 2015.

Carnoustie has hosted eight Open Championships on the men's side, and the course is so brutally difficult that it has earned the moniker "Carnasty" among players.

In 1999, Carnoustie served as the stage for one of the most stunning finishes in golf history. Jean van de Velde committed a triple bogey at the last hole to fall into a three-way playoff, where Paul Lawrie, who trailed by 10 strokes at the start of the final round, prevailed in the four-hole aggregate playoff over van de Velde and Justin Leonard. (Yonhap)